From everything I’ve read, horns are notoriously difficult to model. Even some of the professional half-synthesis half-sampler kits run in to difficulties with it.

Sound on Sound recommends putting pass filters modulated by pitch followers, since higher pitches should cut more harmonics out than low pitches with them. FM can get you the “base” horn sound to work from. I haven’t tried playing around with equalizers to bring out bass for larger horns or stacking oscillators.

Here’s a patch I made when experimenting, it sounds kind of brass-y and might get you part of the way there.

These are the three essential Sound On Sound articles on Wind/Brass instruments. The first starts with the theory and the second two break down the approaches for the most common mono-synths folk owned when the articles were originally published.

tanks a bunch Jonathan.
ps: I went to the Music Dept at the local college yesterday. Left my name # with the dept head.said had someone in mind to help me get a studio set up properly.should resolve probs.

Hey all.Hope all are well at this time. I downloaded the setup for the minimoog brass voice.I have used it on my Berhringer D and sounds real close to a horn. It is quite close tolerance. just off a bit off it’s not good. Anyway, I attempted to set this diagam on VCV Rack. I was not able to find the proper moduals to get the voice. Here is the schematic. Perhaps one of the knowledgable here can pull the proper units to make the brass sound. GL. I know it can be done. 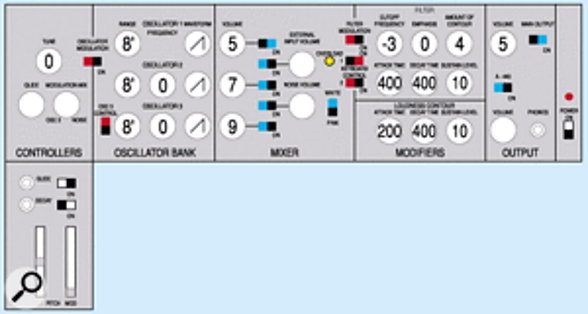 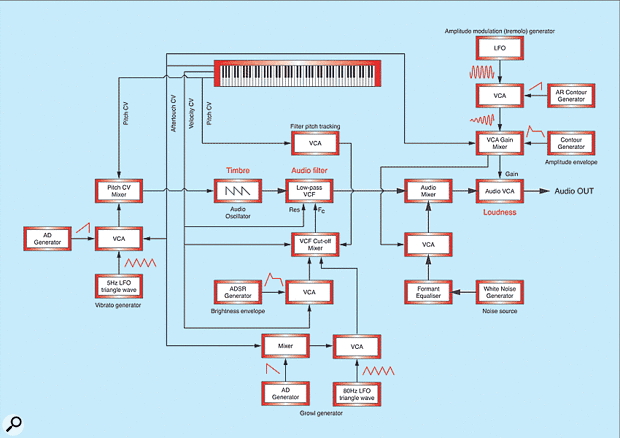 Here is some other info I came across. if an A is being played at 440 Hz, the frequencies of the harmonics will be 880 Hz, 1320 Hz, and so on. The harmonics are numbered in order of increasing frequency. Thus, the first harmonic is the fundamental frequency, the second is twice the fundamental frequency, etc. The relative strengths of these harmonics determine the timbre, or quality, of the tone. The trumpet’s waveform consists of a large amount of the third harmonic, and some from the second, fourth, and fifth harmonics, along with the fundamental frequency. Harmonic synthesis is the construction of a sound wave from its harmonic components. In order to come as close as possible to the exact waveform of the instrument, more harmonics must be used in the synthesis of the instrument’s sound. Electronic music synthesizers use a series of harmonics whose relative amplitudes can be adjusted to fit the desired instrument’s waveform. On more advanced synthesizers, they can adjust the attack, decay, vibrato, tremolo, and release of each note. Bands today use synthesizers all the time in their music because the sound they produce is nearly indistinguishable from the real instrument’s sound. n other words, if we have a trumpet sound at middle A (440 Hz), we know by Fourier’s theorem that we can express this sound as a summation of sine waves: 440 Hz, 880Hz, 1,320Hz, 1,760 Hz…, or 1, 2, 3, 4… times the fundamental a trumpet-like waveform by subtractive synthesis. a typical ‘swell brass’ envelope, and it is easily produced by a synth with a five-stage amplitude contour and an LFO that can be routed to the audio signal VCA. For a note of, say, 256Hz (middle C), this ‘settling’ takes about a dozen cycles. This means that there’s a period of pitch instability lasting about 50mS: a duration of the same order as the time it takes for all the harmonics to reach their steady-state amplitudes. Hvae fun!

You have a Minimoog emulation here

If you also want to try Harmonic / Additive synthesis I recommend :

Cool. I haven’t been around much lately. Got caught up learning/playing electric guitar. And I just got a Besson silver cornet! Circa 1900. I have been searching for a few years for this horn. Been watching the Behringer Poly D. I see it in retail stores now. I want to hear reviews by others before pulling the trigger. 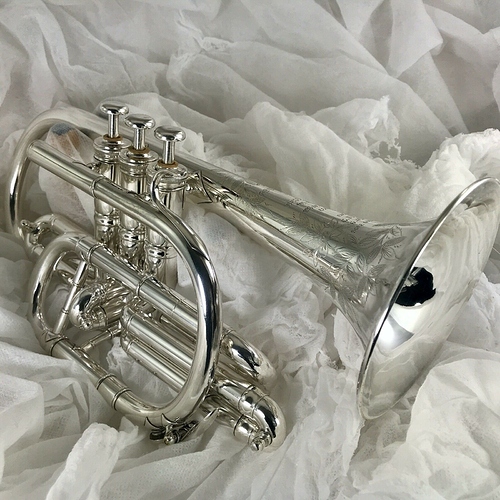