Can someone explain to me the differences between the zOu MAi and enCore sequencers from biDoo? I have a small handle on how zOu MAi works, but I’m having some issues with using enCore (enCore 32ppqn?) (these camelcase plugin names make this post look like a ransom letter

Encore was made for me, because I complained about Zou mAi not syncing properly when you start a project.

Zou Mai and reset and first 5 or so beats

Hi Seb, I still have problems with Zou Mai and restart/reset. the first few bea…ts are not consistent at all, I think the reason for this is given by you : `Lets say zou sees 1000 ticks between each clock pulses. So with your configuration zou goes backward 2 steps each 1000 ticks i.e. a step is 500 ticks long. If you reset after 200 ticks consumption and you send a clock at the same time so the new base will be 200 ticks then zou goes backward 5 times faster before the next clock pulse occurs. If I ignore the clock signal when reset is fired the new base will be, with the same example, 1800 ticks long so zou would go slower before the next clock pulse. I do not know how to handle that kind of situation.` _Originally posted by @sebastien-bouffier in https://github.com/sebastien-bouffier/Bidoo/issues/152#issuecomment-623398575_ What if there was an option the just let Zou Mai use the triggers/gates from an outside clock, without it trying to get the BPM. I know you can not use the 1x2x3x4x speed any more because it does not know the speed/bpm. Or maybe do it the way Voxglitch does it with his Groove box : https://github.com/clone45/voxglitch/blob/master/docs/groovebox.md He uses a x32 clock input and it's as steady as a rock/clock ;) Let me know what you think, Greetings Peter. Below is an example that manifests the Zou Mai problem, use the spacebar to stop/start the sequence. [Bidoo Clock - 16072022.zip](https://github.com/sebastien-bouffier/Bidoo/files/9126143/Bidoo.Clock.-.16072022.zip) And here is one including the groove box it also ratchets ;) [Bidoo Clock and Groovebox- 16072022.zip](https://github.com/sebastien-bouffier/Bidoo/files/9126158/Bidoo.Clock.and.Groovebox-.16072022.zip)

Encore has a 32x clock input and is steady as a rock.

32x is so much better for VCV.

Got it, that makes sense. Any suggestions as to a clock that works well with it? Or am I missing something with Clocked and Clockd (my go-tos)

On Clocked turn off “output High etc” and turn on On Start “Send Reset pulse” and On Stop like below : 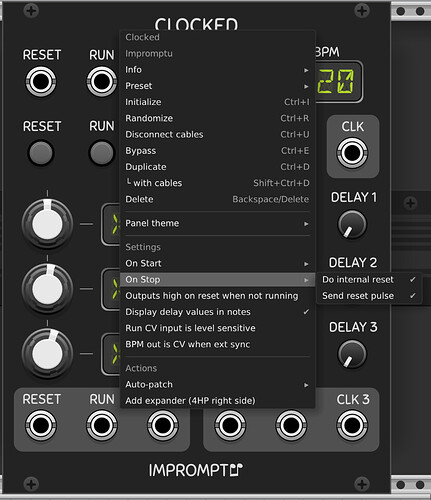 And set one of the clocks to x32 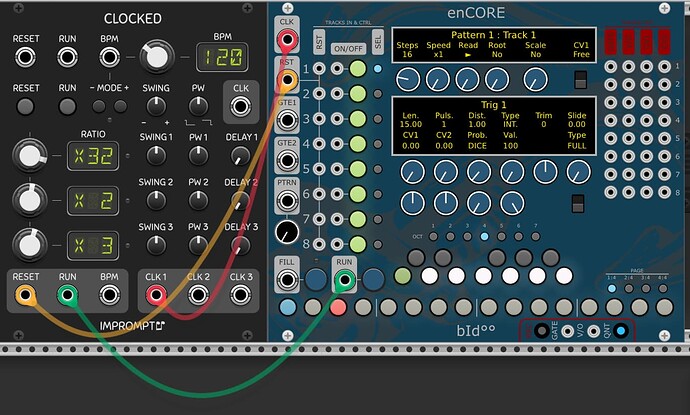 Thanks! I see what I was doing wrong

Funny that just when you want to use a module, an update causes a BUG, let us hope Andrew will update the version soon.

it works on vcv1

Seriously, how long does it take for an update to go through? It’s been days now… Maybe the developer could put up a compiled version on his GitHub.

You could ask Seb (Bidoo) for a compiled version on Github ( He’s a very nice guy) , but for it to be released in VCV he’s dependent on Andrew to compile and release it (mostly once a week on Sunday).