With Popularity stats now available for free plugins ,there’s an obvious divide between adoption of the “Base” plugins authored by VCV, and those of third party developers. 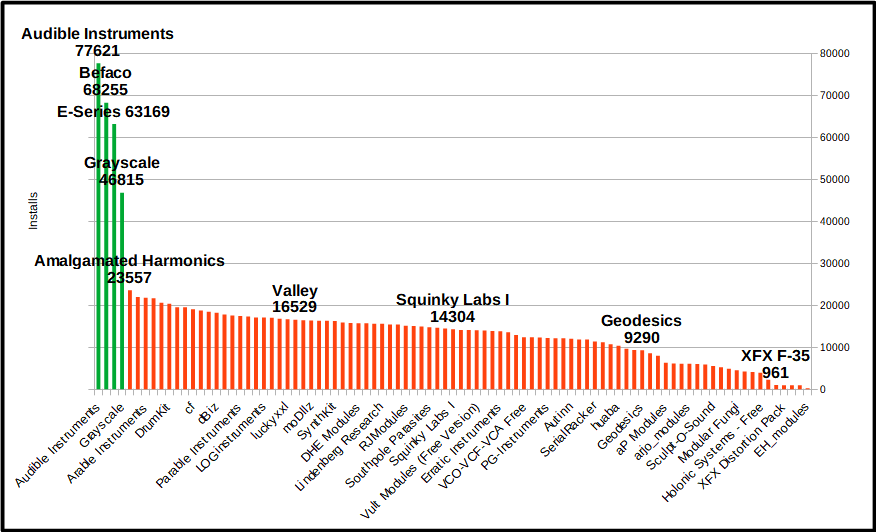 My question goes to users who have installed primarily/only those free plugins authored by VCV, and not 3rd party developers: WHY?

Is it a concern over safety/security, sheer amounts of overwhelm on where to start, lack of interest, or something else?

sheer amounts of overwhelm on where to start

I’ll take that one

I just install everything because it’s easier for me to figure out what’s what by trying it rather than endlessly watching youtube.

I do need to start uninstalling some stuff now that I’m getting things a bit sorted. But then I’ll have a problem with not being able to easily identify which things I’ve tried and uninstalled and which things I’ve never seen before. With everything installed it’s easy to see the new stuff.

At first glance, it kind of vaguely looks like newer plugins generally have fewer installs, and older plugins have more installed (older/newer meaning when the plugins were first added not necessarily when they have been updated).

Could be folks selecting most/all free plugins at first install and then not checking plugin manager page for new plugins?

Assuming the “new plugins don’t get noticed” correlation is real and if that is considered a problem. Maybe a ‘New plugins available’ indicator in addition to ‘Update plugins’?

Though a ‘New plugins available’ might be annoying to folks that don’t need or want new plugins.

Maybe a button on the plugin website: Auto register to all free and bought modules
And then whenever a new free plugin come out, it get registered automatically.

Another possibility is that the difference is from installs that are not regularly used or updated.

Assuming it is common to install, then select all the free plugins, but maybe not become a regular user. Older ‘stale’ installs would be more likely to have some of the earlier plugins. I don’t know if the numbers are from current/active installs are not so can only speculate. Did older (pre plugin manager?) installs include the Fundamental/Befaco/Audible/Grayscale by default?

(Apologies for potentially reading too much into the numbers, I just find software packaging data kind of fascinating…)

I was thinking about those trends while afk driving as well…

IIRC @Vortico, when I came onto the scene around 0.5/0.5.1 (right at the advent of the plugin manager), the 4 VCV authored plugins (plus Fundamental obvs) were auto-included, right?

The most downloaded 3rd party plugin are mainly alphabetical due to the P.M. used to work this way for a while

Yes and no? Obviously Amalgamated and AS had top honors for a long time, but they’ve also been around longer than many other plugs.

I don’t get round to making much music with VCV, so I don’t know how representative my experience is.
There were already a lot of plugins around when I started, so I didn’t blindly install them all, I thought I would just get lost.

Instead I install plugins when I am curious about a module, or when I need a particular functionality and am trying out some modules that might suit.

So my installed list is growing, but only as I come to use it.

I’ll take that one

I second this notion but not because of the overwhelming amount of pluguns, My ease of becoming distracted is all on my own lack of discipline. What I do love about the tremendous amounts of module to choose from really helps to keep the spirit of discovering new and interesting methods and combinations at a constant pace. It’s not just that new software smell that compels me to say stagnation and boredom stands no chance in the VCV Rack realm.

As the saying goes - there’s lies, damn lies and statistics

Inferring the right wisdom from a dataset is usually much more difficult than people generally think.

Regarding the “popularity” data, I would wait another 1-2 years, before seriously regarding them as an expression of “popularity”. I believe, at this stage, the numbers very much reflect what few things that were actually available from the start, and that on the plugins page the VCV created plugins were actively encouraged as “install these first and play with it”, which is what people did, including me. Remember that the numbers are “how many people have downloaded these” and not “how many people love them”. So you can have a new plugin, that’s wildly great and popular, but is very new, so the numbers will be low for a good while. To better judge actual popularity, you would need telemetry data sent for each module/plugin, every time someone uses it in a patch, and a lot of folks wouldn’t like that

That was a long-winded way of saying that the numbers, as they are right now, shows as much about plugin age, the age of the project, and what was available in the beginning, as “actual popularity”. Actual popularity at the moment, as in what people use and love on a daily basis, would probably be more accurately be gauged by watching a rich sampling of the videos people post.

Having said that, obviously the Audible Instruments and Befaco plugins are really nice, so I would expect those to continue to be popular, rightly so.

I wouldn’t actually mind that, on the plugins page, but it’s actually easy to see already now, by sorting on the “Build updated” column.

No, only Fundamental was ever included in the VCV distributable.

Actual popularity at the moment, as in what people use and love on a daily basis, would probably be more accurately be gauged by watching a rich sampling of the videos people post.

on the vcv home page is there a way to search for type of module, i.e vco, delay, wavefolder…,? I haven’t found a way to do this other than google; or just install everything and search within vcv rack.

I assume the answer to your question relates to the lack of a search option and this is the main barrier.

The trick is… you can’t download indvidual modules, only plugins.

when v1.0 comes out, there’ll be more granular search abilities though: @Vortico answered on facebook

In the meantime though, Install Submarine Utilities, and look at the Module Browser…

My question goes to users who have installed primarily/only those free plugins authored by VCV, and not 3rd party developers: WHY?

in my case it is by the image, when I met vcvrack I only had a vague idea about the modular synthesizers, those created by andrew look much more like real modules (since they are based on real modules) while others most of the modules have a very sloppy image.

I do not mean with this that they are a bad product, they are simply not attractive in the first instance

Wait. Lemme get this straight. You base your picks for modules on looks instead of sound?

I can understand if the UI were downright unusable, that one would shy away. But to eschew “most” of the modules because they don’t look like meatspace hardware?

Or even “sloppy”? (to which I highly disagree, I can count the number of “sloppy” plugins on one hand).

I could understand if you were paying meatspace prices for them. But you’re not, even with the paid plugins.