Here, I challenged myself to emulate the Arturia’s Minibrute 2 implementing as many of it’s features as I could. Since I don’t own this hardware, I made this patch only based on the documentation. the result came to a quite large patch which I cannot play myself due to the limitation of my computer. But I think that it works. I found this was a good way to get a quite deep knowledge of it. I hope that you’ll enjoy it. 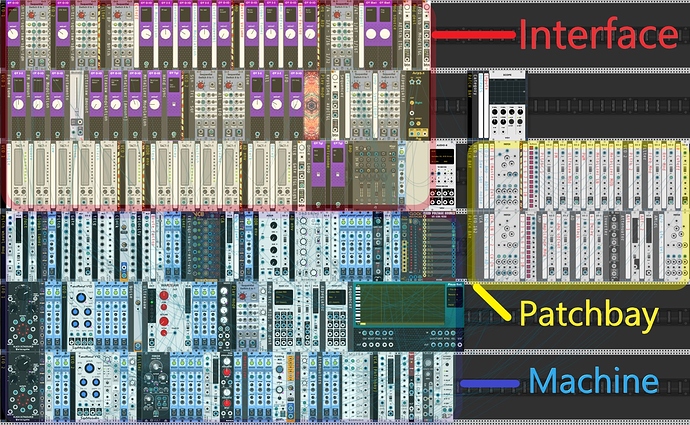 So, The Idea was to build not only the machine, but also to reproduce the interface (and its behaviour), and the patchbay of this awesome instrument. I also implemented the sequencer and the arpeggiator. They’re not as efficient as on the hardware, by far, though. I couldn’t figure out how to reproduce the metalizer, so I choose a combination of wavefolders that approach the sound the best. Recording a sequence requires no gate out since it resets when there’s a gate off. The reason is that in this way, when you stop playing when recording, the sequencer will immediately loop what you’ve plaid. So no rest permitted (If you find a solution to that, please tell me

). You can play among the sequence when its playing though, witch is fun. For the patch bay: I use sequential switches for inputs that replace the original signals. So, you’ll have to use the second channel for patching another way and press the corresponding button (Alikins module) to replace. Most all of the shift function are missing.

And… Omri, if you want to make a video on it… feel free to!

If you’re an OSCtouch user, here’s a template: https://drive.google.com/open?id=1JAr0ZpppqkUYxjpQpNE6YgUDINBjwSIt (Not mapped in the patch, you’ll have to do it by yourserlf. I put a Stoermelder’s midi cat in the patch for that purpose)

You’ll need these plugins: Note that I tried to use as less commercial modules that I could. All the plugins except the one from Klirrfactory are available in the plugins library.

Cheeeerss! Have a nice week. DENIS

Ah… I see Arturia is a French Company, this explains a lot