Hello heyo! This thread is the semi-official release thread of Quatherina the Quantum Duck presents Quatherina’s Quality Quad Quantizer, which the lazier among you might prefer to call QQQQ, and three other modules in its family: Quack, Q<, and Quale.

Why semi-official release? Because… I kinda broke the library with this module. I can compile it just fine via Azure Pipelines, but the library uses a different environment. Maybe you’ll be able to help?

Refer to the VCV Manual for instructions how to install non-library plugins on your OS.

To avoid showing you an update message, the plugin.json file is tagged with the previous version. That means once you see the library has an update available for my plugin, it’s safe to install.

And now, to introduce you to Quatherina: 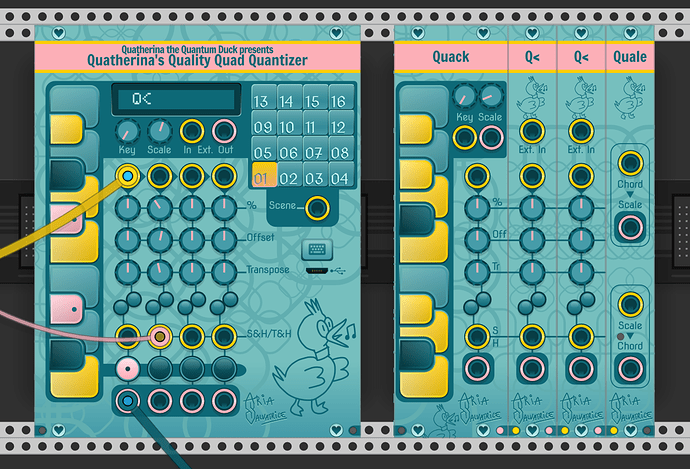 Quatherina the Quantum Duck is best known for her aventures in the Quartz Quasar, in the Quaint Quarry, in the Quarrelsome Quahaug Quagmire, in the Quarantined Quaestor Quadripoint, and in Canada (the canonicity of that last adventure being a point of debate amongst Quatherina’s fans that I wish to remain neutral about). To finance her adventuring lifestyle, she has graciously accepted payment (in the form of an undisclosed tonnage of Quaker Oats) to lend her name and likeness in endorsement of my synthesizer modules.

Quatherina the Quantum Duck presents Quatherina’s Quality Quad Quantizer is a quantizer: it coerces any input signal into the closest pitch of the scale, and outputs it as a V/Oct signal. It only works with Twelve-tone Equal Temperament, the usual Western tuning system. It provides four separate quantizer lines, each with a built-in scaler and offsetter to change the range of the signal, the ability to transpose the signal, and sample & hold. You can save scales and chords in 16 slots.

With the Keyboard button, you can write down or paste chords from the clipboard, and have them transformed to QQQQ scenes. Lead sheet notation, Roman numeral notation, and Portable Sequences are supported.

And this is the Song of Quatherina: 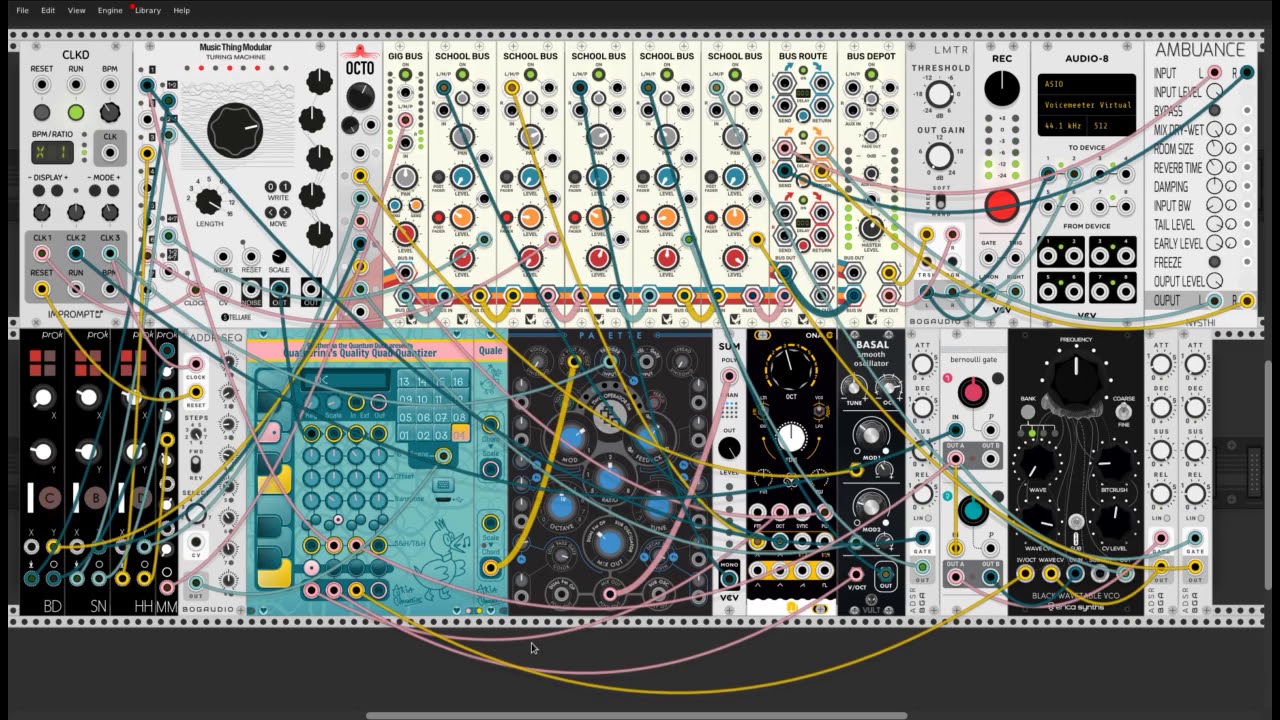 The entire song comes from a single source of randomness fed to a single instance of QQQQ.

The three quantizers, QQQQ, Quack, and Q< are just three different form factors of the same underlying module. They also act as expanders of each other, so you can mix and match depending which features you need or don’t.

All my modules that work with scales (including my upcoming release, Modulus Salomonis Regis), can share a scale as a 12-channel polyphonic cable, where enabled semitones have a value above 0V.
While it has a higher performance impact than encoding it on a single-channel, this polyphonic representation has the benefit of being easily user-hackable, which is what matters to me. I encourage interested developers to interoperate with this way of representing scales.

The fourth module, Quale, converts scales in that polyphonic representation to a V/Oct chord, on the fourth octave (0V~0.91667V), and the other way around. You can also use it as an expander with the three other modules!

Despite all its features, through aggressive subsampling, QQQQ is faster than many quantizers in the library. I hope it’s going to become your new go-to module for this task, and that you will explore all its advanced features.

Be sure to read my more exhaustive shitpost documentation about it on my web site.

Here’s four more little patch videos I quickly threw together to showcase some QQQQ features during its development: [1] [2] [3] [4]

I have been asked if I accept donations for my plugins. I have yet to set up a good system (receiving money legally as a private individual in France is a bit difficult to accomplish if you wish to protect your privacy), but for now, one possible way to do it is to purchase my name-your-own-price albums. I understand it’s a bit cumbersome, and will look into better options in the future.

Re-licensing to GPL-3.0 Only

As my modules move from from being a little collection of quick hacks to a more polished product, I have decided to relicense them from WTFPL to GPL-3.0 Only. It doesn’t change anything for users, it’s just for developers. Please see my github page for the full details - the licensing of the various components is a bit complex but unambiguous.

Much like Darius, it is as chaotic or deterministic as you allow it to be. It’s all about slowly mutating patterns, and I am very happy it’s turning out exactly how I imagined it would. You can try builds (missing many features) in my development thread. Like QQQQ, Darius and Arcane, it supports my polyphonic external scale format. 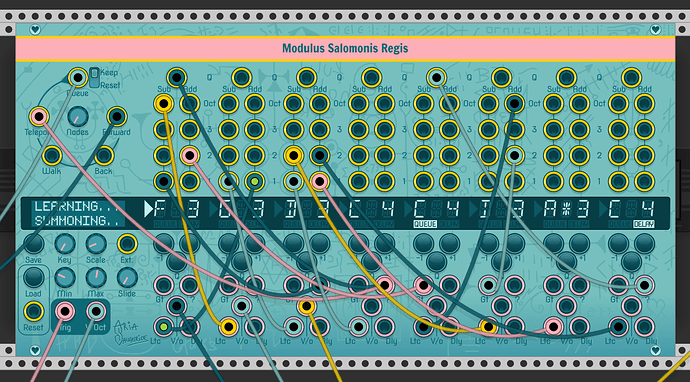 This is so good. I think this has every feature I’ve ever wanted plus another 10 more I didn’t know I wanted! The copy/paste musical notation is genius. I’ve only used it for a bit but this will certainly be my go-to quantizer. The interface is really cool and functional as well - I appreciate those nice big keys for those of using trackpads

I’m more than willing to pay for modules of this quality on the library - but I donated using your link. If anyone is curious it took me about 20 seconds using Paypal so it’s no trouble…

But an offset of ±10v and another transpose of ±12 octaves seems a bit excessive… I would suggest ±5v and ±3 octaves. And since I always have MIDI-control in mind, i would even prefer a smaller input amplification range of ±100%.to get a better resolution with MIDI. Just my preferences… not to make Quatherina upset or anything…

But an offset of ±10v and another transpose of ±12 octaves seems a bit excessive… I would suggest ±5v and ±3 octaves.

That’s mostly because the knob controls the two other transpose modes, which operate on semitones/scale degrees. That way, right-click input works as you’d expect (you type 2, you transpose by 2 units, whatever they currently are, and without the knob jumping positions).

Ok that’s understandable. ±10v on the first offset is still a lot more than most oscillators range, I don’t see a use case for me where I would want more than 5v offset, but maybe someone does…

The documentation for QQQQ has been ported to my new WIP documentation site! Be sure to check it out, I think this new format will be way easier to follow than a big github readme.