Any modules that can create this kind of random pattern?

I’m looking to generate “random” patterns that looks like this, for example:

I can develop myself the module if there aren’t any available, but the point “3” is the most difficult where I need your help: not sure if there are any musical algo that already to this (don’t think its some kind of euclidian setup).

Thanks for any helps.

Any of the Drum Sequencers, Gate Sequencers, etc. (like most modules) can be randomised with the right click menu. This might be too random. You can generate triggers using a branched set of Bernoulli Gates which will get closer to what you need.

There are a number of ways to set up short phrases and trigger them randomly.

The Entrain modules are quite powerful MIDI / V/Oct sequencers ; 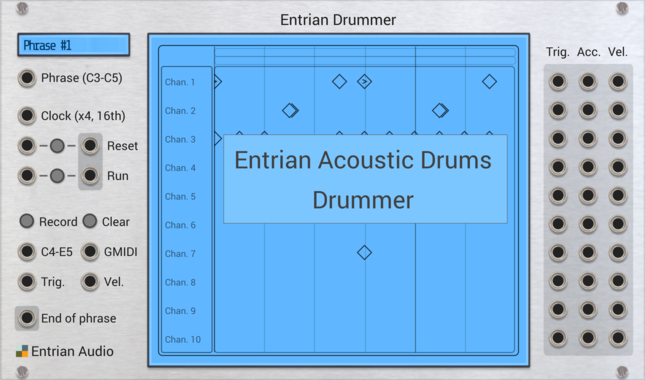 You can generate triggers using a branched set of Bernoulli Gates which will get closer to what you need.

What do you mean with branched set of Bernoulli Gates? Is there any module that can store a bernoulli “seed” scheme, recall, trigger and such?

What do you mean with branched set of Bernoulli Gates?

I use several Bernoulli Gate modules, triggering each other in a pattern that can set pseudo-random patterns depending on compound probabilities.

Is there any module that can store a bernoulli “seed” scheme, recall, trigger and such?

This sounds cool but I have no idea about that.

Is there any module that can store a bernoulli “seed” scheme, recall, trigger and such

It may be too experimental for you but docB RndG is a nice module.

In all my attempts I have not found any single module that can give me all four points you are looking for. However, I have found modules that I’ve been able to cobble together to get kinda sorta close.

Hexaquark, which @modlfo mentioned, has 8 channels each with 4 pages and 8 patterns.

One of the Count Modula sequencers can also work well for this, especially with the expanders that let you add on channels; most of them support polyphonic outputs as well.

With Hexaquark you get a gate and a CV for each channel. You change the CV by marking beats as accents vs. ghost notes. You could use this to modulate a gate modifier. I’ve also had luck using one sequencer for notes & rhythm and then CVing a gate modifier using an addr seq or other; it’s not very generative, but you could introduce some probabilities.

DejaVu by OrangeLine (which is essentially a combination of Seeds of Change (mentioned in another post above) and The Gardner) is good for this, but does have a learning curve Any of the PathSet Rainbow sequencers allow you to configure how repetitive you want phrases to be

This is the one I haven’t been able to solve yet. Bitwig Grid has a beat quantizer, I think that’s essentially what you are asking for here. I have not seen a single sequencer that combines your above requests with beat quantization. I’ve also tried combining multiple sequencers to do this, and sequencing them with PathSet’s Glass Pane. This works okay, but in my experience only with sequencers that have an EOC output (to let the parent sequencer know when to move on), and not all of them do. That said, PathSet’s One Shot works great for creating “micro-sequences” that interrupt your primary sequencer and play with a different clock, then send control back. It’s hard to describe, but pretty clear once you try it. I recently learned about trigger buffers which sound like they could solve this, but haven’t had a chance to play with them yet. ML has one, as does Sickozell (which was recently featured on @Omri_Cohen’s channel).

There are others I’ve tried, each with its specific use case. I would love a single sequencer that solves all of these issues, but I think it would be far too complex. I think the answer lies in being able to compose multiple sequencers to achieve your goals. I have some specific ideas around this too, but this post is already too long. Maybe we can chat separately? I’m also a developer and would love to look into a project like this.

EDIT: I just released this patch today that uses Quantum Compass from Path Set (can you tell I’m a big fan?) It generates some beautiful sequences and has a CVable Chaos control for aiding with repetitiveness.

Try this trick. Instead of a master clock, use a pulse wave LFO with the pulse set to 50%, then invert the LFO, and send it to a sequencer like Bogaudio Addr sequencer clock input. Set the sequencer to ±5v and use that CV to control the pulse width of the LFO. Less than 0v shifts the beat backwards and more than 0v shifts the beat forward. You can create some interesting microtiming rhythms this way. It sounds like a mission but it is just 3 modules.

Interesting, looks like you want to bring different parts in and out. I sometimes do this using multiple clocks set to the same BPM, and trigger the run input with a divided clock through a Bernoulli gate, so different sequences randomly start playing every n bars. If you want the drum patterns to change too, I find Seeds of Change is great for drums, you can change the pattern by re-seeding it. Maybe use different modules for each element (kick, snare etc), and start/stop each one with different clocks. If the Seeds of Change are all triggered from the master clock, every thing is in time but you’d have different patterns dropping in and out. Just an idea!

Submarine FF-206 is another wonderful little utility module that can convert practically any trigger sequencer to something similar.

Bitwise by me can help with some of that but until I get the time to finish off the expander you’ll be stuck with the in-built patterns.

Thanks for all suggestions.

Some of them was know, some are paid module and can’t try them out.

Basically, not sure if I’m using correctly them. I’m not able to end up without making random/non musical pattern

They all sound as a sequence of “biipp” without any “groove”.

Am I missing something? Any example patch? Just to understand if we are looking at the same target hehe…

You might not actually need the variable gate length as you can achieve the same / very similar effect using triggers and modulating the decay on an AD envelope or the Hold time and maybe the Decay on an AHD envelope like Vult Spank.

This tends to be a more common/quicker/easier way of getting ‘variable note length’ in modular than actually varying the gate length and having a sustain stage in an envelope respond to that.

For the things you requested, specifically randomness with repeating, maybe look into Turing machines. The rack has the OG Turing machine from Stellare and the Grayscale Permutations modules. These specifically have a clock driven random output that can be locked on a phrase length from 1to 16 beats, then nudged open for more new rhythms and notes. The separate gates can be used for more outputs or even combined with logic. For the gate length, maybe look into VCV Gates, a super lil utility that has modulation on gate length. Or for another kind of fun RGate, which has length and dividing and ratcheting in one box. Send them clocks( which could be Turing Machine rhythms) thru polymult and get up to 16 channels. Curious about Count Modular’s Poly Gate Modifier, but I haven’t tried it yet.

Yeah, I think you’d have to cobble together a bunch of modules.

DejaVu by OrangeLine (which is essentially a combination of Seeds of Change (mentioned in another post above) and The Gardner) is good for this, but does have a learning curve Any of the PathSet Rainbow sequencers allow you to configure how repetitive you want phrases to be

For something completely different have a look at “Cosmosis” and “Neutrinode” by Sha#Bang! Modules, but for those you may want to quantize the timing somehow.

Don’t forget about Analog Shift Registers for evolving patterns. Something like feed the last output value into Count Modula’s “VC Switch” or “SW2” and back into the ASR input, or not. (Ooh, I should try that myself.)

Inspired by this thread I created a patch that switches between multiple sequencers to create a lot of variation with the same two voices.

Currently you have to switch sequencers manually, but it shouldn’t be too hard to sequence them automatically with a multitrack sequencer or router. 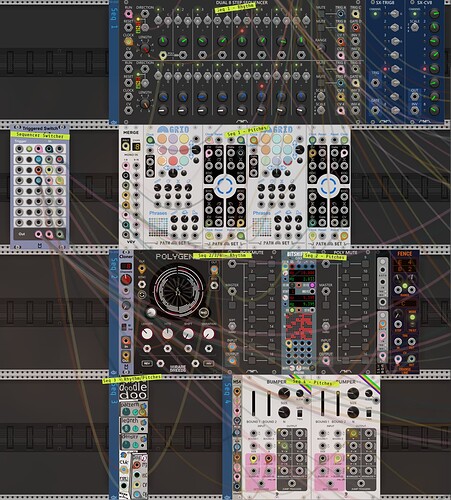 it shouldn’t be too hard to sequence them automatically with a multitrack sequencer or router.

Update: I threw a Gate Seq 64 on it running each track to one of the four trigger inputs on the 8x3. Works great!