Any advice about setting up a "z-plane" filter patch?

is there a module that allows z-plane style morphing between various filter modules?

No, I don’t think there is. Although there is a Eurorack hardware module now, by the person who founded Emu and the Morpheus:

I used the contact form on his website to ask if he’d consider a VCV port. Will let you know if I get a reply!

im familiar with the Rossum stuff. i doubt Dave Rossum will port it to vcv or make the code available but you never know for sure if you dont ask.

Well, I got a response but it’s no, they don’t have any plans to make it available for VCV:

“Z-plane filters as implemented in our Morpheus module require powerful dedicated hardware for the processing. Our engineers have been able to achieve vanishingly low latency from the analog inputs to analog outputs on products like Morpheus and Linnaeus that could not be matched using a system like VCV rack.”

Still, don’t ask…don’t get. Maybe if enough people pester them…

Actually, I believe @Vortico would prefer folks NOT pester other manufactures. It can annoy them and then if and when VCV proposes a negotiation, they’ve already got a bad taste in their mouth for Rack. Apparently, this has already happened more than once.

I won’t/can’t stop anyone from begging manufacturers “You should port your module to VCV!” but as @SuperMuppet has learned, it does nothing because all manufacturers have already heard of VCV and have already made a decision in their mind. They have to make up some random reason (e.g. “low latency”) to tell the customer, but in reality, they don’t see a 1) profit benefit or 2) fun benefit of being involved with a project like that. Having N customers ask them isn’t going to change either of those points.

Maybe if enough people pester them…

Please don’t do this.

@Squinky would love to hear more about that sometime. did you interview him for something or was it a tech talk?

@Vortico i wish more manufacturers would see porting to vcv as a great way to let potential customers try a high quality emulation of their modules before they buy. you would think they would see the potential in that. could also be that some manufacturers just dont want to maintain a software version?

paid him for consulting on how to tune VCOs in an analog polysynth!

i dont have that module although it looks to be only X, Y. you would need the Z axis to emulate the z-plane. what i am thinking of would be a kind of “go between” module that would allow patching z-plane style patches where you could morph between different filter modules from different developers. 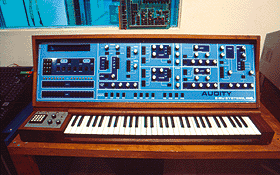 wonder if he was sitting next to one of these.

Haha, I remember that. But no, he had just done work on the Prophet Five, I think.

Fair point. I suspect it’s not commercially viable, and pestering won’t change that (as well as being annoying). There is also the support angle, where people try to run a product on an eight year old Macbook and it doesn’t work properly. I can understand hardware developers not wanting to get involved in PC support.