Found and old post today by @synthi in this thread with a very appealing picture and a short text just saying “Phoenix 1997 on macos9”, followed by a post by @Vortico, who said “You had something to do with Phoenix, right? Were you the author?”.

Well, that was enough for me to stop reading and quickly search in the Net for this misterious “Phoenix”, and obviously i found it … here!

Interesting connection to Syd which I posted about earlier. Antonio Tuzzi, author of a software synthesizer named Phoenix developed in 1997 for the Mac, dropped by to post a comment on the Syd.

“I think I’ve seen for the first time Syd in 1996. Was my inspiration: I wrote a couple of emails to Jim and after that I decided to write a virtual analog real time synth and by the 1997 I had Phoenix up and running on MacOS9. Phonenix is (was) a very powerful tool! It was used in couple of schools. If you have a powermac still running MACOS9… let me know the url contains a snapshot of Phoenix running”

After some days of this comment, it seems that Antonio sent a copy of Phoenix to the Blog Master for him to post it in the Blog for whoever wants to download it (which i quickly made, of course!

"OK, i already have Phoenix, but how can i run it?"

I knew already of “SheepShaver” and “BasiliskII” emulators as i used them in the past, and i knew that its installation was a little bit tedious … Fortunately another quick search in the Net lead me to this page where i found that someone created a self-contained MacOSX application (don’t worry, there’s a link for Windows users also there) with everything installed and ready to run! … So i downloaded, extracted the zip, copied the app to my Apps folder, run it, copied Phoenix folder into it … and there we go!

NOTE: I have recorded some audios (as you can see in the screenshots below) to upload them here for you to hear how it sounds … Unfortunately the forum do not allow us to upload sound files

, so tomorrow (now it’s too late), i’ll see if i can upload them somewhere else and put the links here.

Here you have some screenshots of Phoenix (Modular) Synth running on my system (OS X 10.13.6) 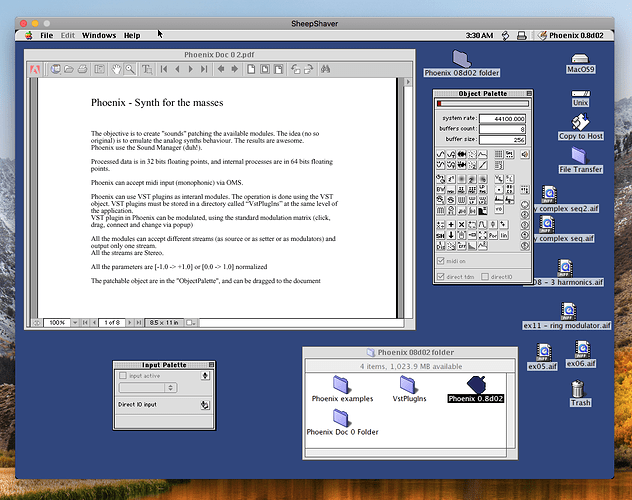 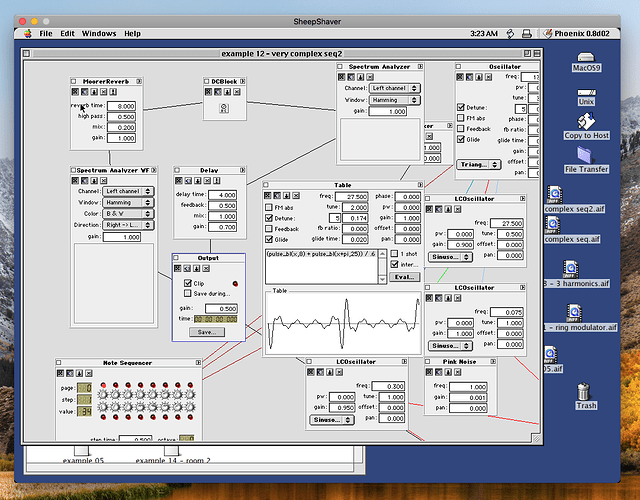 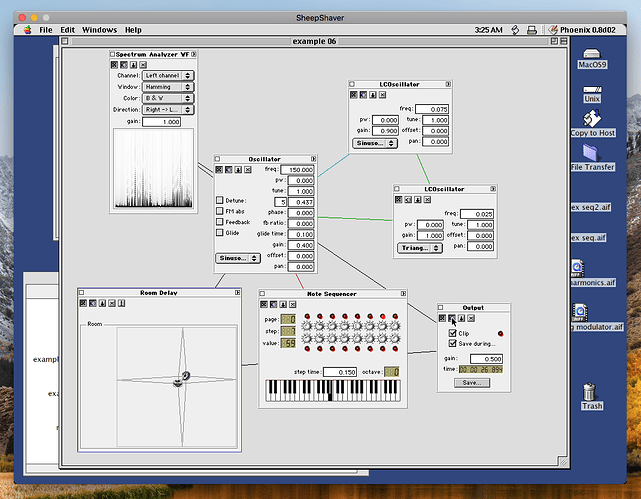 A wonderful software for the time (1997) @synthi, and thanks a lot for sharing it! Respect!

I had better UI skills at the time !

the FileOscillator is the Complex SImpler Grand Grand Father
and the Table VCO for the 7seas
very good time! I was doing audio and getting a salary for it …

Reminds me a little of the Atari Falcon days… really looking forward for those sound uploads you’re talking about! Make sure to put it in Wav so we all can celebrate it in our Digitakts and what now… Mess around with it to even keep it more alive… please! What a library!

Finally found a free site to upload the audios (i don’t have dropbox or things like that), so here we go (the download link is under the social networks icons):

Let me know if you had any problem, and/or if the lengh is OK for you to use as samples (otherwise i will make lenghty recordings).

Also please note that this are recordings of some of the examples that @synthi put in the Phoenix package that he sent to the Blog, so they are not my own (personaly i think that if i need time to do something decent with VCV Rack, with Phoenix you can multiply that time at least for two

Will grab them tomorrow and transfer them to the Digitakt! Definitely useable stuff there, awesome! I’ll let you know when I have a result to share, ok? Thanks!!

Consider using the Internet Archive or Freesound. They both are not-for-profit, they support Creative Commons / copyleft licenses, the content you upload there will get more visibility, and it will be preserved in the long-term future (especially on the Internet Archive)

“Alright, this is going to be interesting…” I said a couple weeks ago.

So I, as a pure no-Apple-all-Windows kid, have set out to attempt to get Tuzzi’s early Parthenon of a Software Modular Phoenix, on Windows, through SheepShaver.

Of course, the normal way to go about this (with the Mac OS9 thing that pre-installs everything) would be to pass the Mac-Compatible application onto Sheepshaver through copying into a folder pre-made on the Emulator).

The MATRIXSYNTH file that 'Tonio gave them is a .rar file with a .dmg inside.
For a normal Windows user, it’s basic instinct to extract the .rar file and put the .dmg into SheepShaver.
Well, here’s where s**t begins to go wild.

Because Microsoft wants to punch a hole in Apple’s liver every few minutes, and vice-versa, placing a Mac-Compatible application in Windows basically renders a lot of things barren of any metadata, of which include the resource fork, as far as I’ve understood. This meant that, even if you could put the file into SheepShaver, it was like trying to read hieroglyphs on a broken stone. The file, was no more.

the .dmg file was not really any problem – just use some obscure version of a disk emulator and hope for the best. The .rar file, on the other hand, is a whole 'nother story.

There are applications that can deal with .rar files, like UnRAR for Mac and MacRAR (if they’re not the same thing already), which is good and all, but only, and I do mean only files that were made in WinRAR 3.0 or earlier. The Phoenix .rar file from MATRIXSYNTH is basically dated 2010, which can be at least traced to WinRAR version 4.0 or 3.9x, roughly.

What this basically means is that I, no-Mac-all-Windows me, had finally given up and basically ranted-narrated my losing battle against greedy rivaling companies in the hopes someone had gone through the same compatibility nightmare as I did.

In conclusion, compatibility is the absolute worst at times, and it’s got the strongest uppercut in the ring. Just, don’t.

Unless someone has indeed had the files put into a .sit file, which I doubt is difficult to do. That would basically mean I (and many others like me in the future) haven’t gone through the effort of slapstick-style running into a brick wall a gazillion times just to furiously rant about file metadata.

Thank you for reaching this part of my essay, and have a nice day.

@Josep asked me to post this on his behalf:

HOW TO RUN THIS OLD Wonderful MacOS9 Audio app in Windows
( Checked on a Windows 10 VM myself, and it works like a charm! )

PLEASE NOTE that due to the limitation of the server to which i uploaded it, this file will be online only for a week – I don’t have dropbox or similar, sorry! – So if you, who are reading this right now, find that this is interesting for other users and want to upolad the sit file to your dropbox or similar, posting the new download address in a post, i’m sure that many other Windows users will be really grateful to you

03 - Copy “Phoenix_08d02_folder.sit” into the “Transfer” folder in your MacOS9 installation folder that you created in step 01
04 - Run the MacOS9 app
05 - Drag and drop “Phoenix_08d02_folder.sit” from the Transfer folder into the MacOS9 icon in your desktop
06 - Wait a few seconds and the file should appear in MacOS9 desktop
07 - Double click on “Phoenix_08d02_folder.sit” in MacOS9 and wait for it to uncompress
08 - [IMPORTANT!!!] Now shutdown MacOS9 by clicking anywhere in the desktop to bring focus to the Finder and click “Special—>Shutdown” in the apple menu bar on top … If you try to run the app without first shutting down de app it will give errors and some examples will not work
09 - Start MacOS9 again
10 - Open “Phoenix 08d02 folder” folder and double click on the “Phoenix 0.8d02” app to run it … A blank window will open.
11 - Go to File menu and click open

PLEASE NOTE that if you clicked on desktop or any other place the app focus may change so the “File” menu will not be that of “Phoenix” app … To bring again the focus to “Phoenix” app, either click on the blank window or go to the far right in the apple menu bar on top and click to open the menu options and select “Phoenix 0.8d02”.

12 - Navigate to the examples folder inside “Phoenix 08d02 folder” folder and open any file there
13 - Whoops! I’ve opened an example file but i have no sound!!

HOW TO MAKE EXAMPLES SOUND

01 - Look for the output module in the example patch
02 - Click on the small button with a speaker in it and there you go! (it applies also to any module you want to “mute/unmute”)

NOTE: If you want to get a sound file of the output, select “Save during…” and then click on the speaker button … It will create a temporary .aif file (you can later convert it to any other sound file format if you want) that you can copy after to windows (by dragging and dropping the file into the “Send to Windows” icon in the MacOS9 desktop) to use as a sample or anything else, or even listen to it through QuickTime app in MacOS9 by double clicking on it.

P.S.: BTW as you have already MacOS9 installed in your Windows, you can try also (if you want) other older Mac apps that you’ll find in http://macintoshgarden.org/

As soon as I saw the link, I downloaded it almost instinctively. And also put it on my Google Drive until I learn how to contribute it to Macintosh Garden, which you can get from here: https://drive.google.com/open?id=1xebWbBW4m9UPq1ypZ6su1gj9Txlu45EH

I sent the .sit to SheepShaver, unstuffed, rebooted OS9 as you said, and much to my surprise, Phoenix had opened for the first time.

Of course, it didn’t make sounds at first since, well, I didn’t configure the sound on the Mac OS itself, but once I’ve done that, I was glad to be able to hear example 12 - very complex seq2 in all its complex glory. I couldn’t believe my eyes and ears.

I have yet to try out things like making a Patch from Scratch or recording something out of it, but you bet I will after I post this.

I can’t really thank you (Josep and David) more for your help on running Phoenix: Sunvox before Sunvox and I most likely will check out more things on Macintosh Garden once I finally take this beast for a spin.