What if you kept the Moots as is and added slew functions to an expander module? That could give you room to add functionality to the expander as new ideas and use cases come up, while keeping the original clean.

What if you kept the Moots as is and added slew functions to an expander module?

I’m going to plead YAGNI on the extender for the time being. My developer instincts say don’t create something now because I might want it later.

The slew functionality is very simple and the UI impact will be very small, and now that someone mentioned the click problem, I’m sold on it being built-in.

I have some more thoughts:

Actually, I’m starting to wonder how important it is to ever disable the slewing. What if Moots always slewed for 1/400 of a second before plugging/unplugging the cable? Would that be overly limiting even for CV signals? (I would be remiss if I didn’t at least throw this out there for consideration.)

OK, I’ll back off for now and see what people have to say.

One of the reasons I rarely use the Fundamental Sequential 4->1 / 1->4 sequencers is they always have the slew limiter. I frequently want them for CV, and the slew causes timing issues for the applications where I want to use them.

Most situations that I can think of where a 0 channel cable is needed are for CV inputs, rather than audio. So I think you should have the option to turn the slew off (or on, whichever way you want the default)

So I think you should have the option to turn the slew off (or on, whichever way you want the default)

That is what I will do then. I was leaning that way already. I also feel like I don’t want to change the front panel design, so the options would be in the right-click menu only. I’m also thinking slew should be off by default.

I created an issue for slewing options on the Sapphire GitHub repo.

I have another question for everyone: the gate threshold Moots uses is 4 volts. Anything greater than or equal to 4V connects the output jack to the input jack. Anything less than 4V disconnects. Is this a good enough fixed threshold, or is there a better standard that most users expect for a gate CV?

Thanks! I see where the voltage standards page talks about triggers needing a SchmittTrigger, and I suppose I should do the same thing in Moots, even though it has gates, not triggers.

I didn’t even think about Gibbs “waviness” for actual gate signals. Similar to what you have to do if you design a thermostat, so your air conditioner doesn’t try to turn on and off twenty times in one second!

I’m finding Moots very useful so far! It would be nice if there was a smaller version, maybe with more ins & outs?

i just added a ‘crossfade’ option (essentially a slew) on a couple modules i’m working on, and i put the toggle (as well as an optional duration slider for fun) in the context menu. i don’t know about others, but one of the first things i do when checking out new modules is look in the right click menu for extra options, so i have no problems with it being there. just my $0.02

EDIT: just realized i am responding to an older post, so not sure it’s even relevant anymore

I just submitted version 2.0.1 this afternoon. It includes the context menu items for enabling/disabling anti-click ramping. I also implemented Schmitt trigger logic on all the gate inputs, and made the buttons glow dimly when turned off. I’m grateful for the positive response and helpful feedback from everyone!

I’m finding Moots very useful so far! It would be nice if there was a smaller version, maybe with more ins & outs?

I’m glad you are getting good use out of it! I will consider that down the road. Right now I’m working on my next module, which, in the words of Monte Python, will be something completely different.

FYI, Sapphire Moots v2.0.1 just went live on the VCV Rack Library. Thanks again to everyone who gave me useful feedback for this update!

I was trying to use Moots to unconnect a signal based on the “connectedness” state of another signal. I found an easy way to do this by using my Grande Logic module to control Moots. 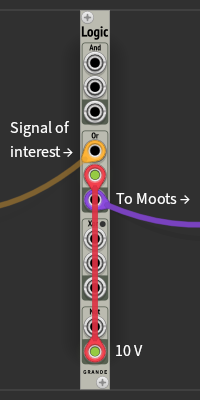 My Logic module has a special feature that makes this possible. When only the B-input is connected, the two-input gates act like NOT gates. (High to NOT → Low, High to OR → High.)

That is really interesting! Thanks for sharing that. I hadn’t even considered “connectedness” as an input value. It makes me wonder if there would be any use for a module that accepts a cable and outputs the number of channels it has as an output voltage. Leave it unplugged, it outputs 0V. Then maybe it could add another half volt for each additional channel, all the way up to 16 channels = 8V. Would something like this be of use to anyone?

I forget exactly what I was thinking earlier this week, but I was wanting a module that gave me the cable polyphony count as a 1V/channel 1-16v. Maybe I will remember what I was going to do with that value.

I think I was wanting to receive chords with various number of notes and arpeggiate the chord by sending the channel count to a sequential switch “length” CV input.

Of course that is not the same thing as number of cables connected but similar. And, modules typically do not accept things such as “length” as floating point numbers that correspond to the desired parameter integer. I often wish there was a parametic floating point CV standard.

By the way, my extensive Eurorack system is a hybrid in several ways. I have 2 semi-modular Moog Mother 32 synths in the rack as well as a 24 bit DSP module.and other digital modules and a Maths module. I am definitely not a “purist”.

Since Grande Logic is polyphonic, you can use it to do what you want to achieve (channel count as 1-16v) by feeding the (poly) Or output into VCV SUM, and reduce the level to 10% 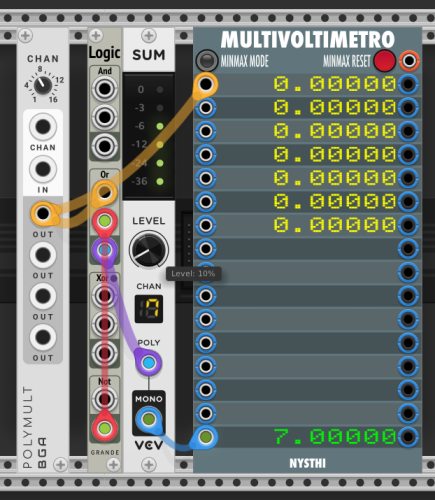 With no cable connected to the Logic Or input, it will also output 0v.

Cool. Thank you. I figured there was probably some way to do this. I’ll have to give it a try and see what I can do with it.