Feedback can create a soft humming resonance to a sound, if it is used appropriately. This patch explores various feedback patching with EQ, filter, delay and reverb.

Watch out for your headphone / speakers when turning volume knobs, it is a feedback patch.

Song that I make out of this patch: Ambient No.18 - Nightsky 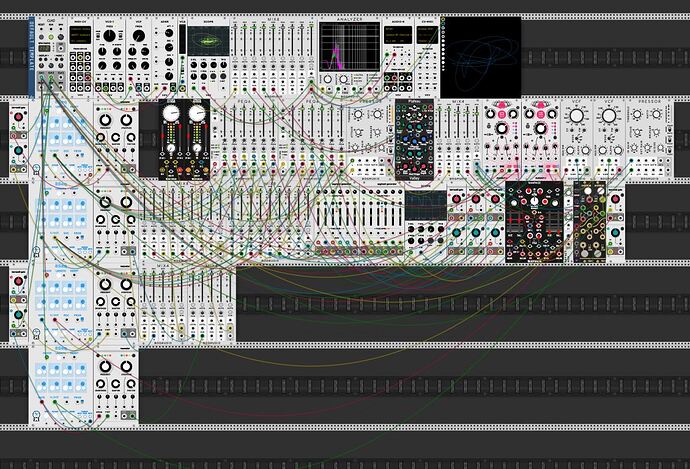 Very cool sounds, thanks for sharing. Have been wanting to explore feedback on VCV more but havent had great success getting usable results in digital medium…

Am looking at the patch but it’s obviously pretty dense to trace your signal paths - can you give a simple explanation of how you put together the routing? Is it mainly feedback created thru mixers returning to themselves with the effects between? or using the feedback loops in delays? Both?

No problem, there are quite a few means of feedback I am exploring in here.

Spring Reverb In 1 Original Signal from Rings, full Wet signal to EQ in Bark Series, back to In 2 as a feedback loop. The EQ are controlled by Stage’s envelope, which is triggered randomly by Branches. Then, the mix signal from Spring Reverb is send to a compressor with soft clip to limit the amplitude of signal. Afterwards, the signal is sent to Plateau to smudge the sound to an ambient background texture with humming harmonics. I am also exploring stereo spectral sculpting with EQ, odd series to one side of stereo channel, even series to the other side of stereo channel (a lot of EQs e.g. Serge Resonant EQ / Verbos Bark Filter have odd/even series outputs to create faux stereo depth). The EQ is controlled by v/oct signal coming from sequencer, so it make it more of a comb-filter resonator than just pure EQ / filter bank.

Dry signal before the reverb is send to a delay, then full wet signal to two resonant BP with v/oct tracking, then back to the mixer, then to the delay as feedback loop. The delayed sound in result have a more accentuated resonant tone that sounds like insects. The signal is also send to a compressor to limit the amplitude of the signal.

The feedback is quite strong, so there are a lot of resonant frequencies in the spectrum. The fundamental tone in minor scale is way weaker in comparison. I think the use of compressor or distortion module in feedback loop is quite important, as it limits the signal from being too hot and gives more headroom to the mix. Of course, the opposite works well too, if you like the sound of harsh feedback.

Awesome, appreciate all the detail, def really cool stuff and gives me inspiration to fiddle, especially as soon as I can cue these patches up in Bitwig and own the world

Thanks for the post(s)!