Airwindows - A Fresh Approach: Looking for some testers and feedback

Yeah we have a proper designer working on this. I mentioned up thread these are just placeholders

I went back and forth on this and I think you are correct it is useful to display these in the search somehow. For some of the plugins the name and category don’t map well.

I’ll noodle on it

This is great to hear

I can get the menus to where I want them and keep them consistent: this is why I’ve put the effort into getting all the unclassifieds, classified. That means if you do display category in the search, somehow, it should be able to stay consistent rather than changing around.

‘name and category don’t map well’ sounds like it could be my department, as I picked names for the categories. Do you mean it just takes up too much space, or that the plugins seem to be in the wrong category? I’m mostly sure about all that but this would be the time to move 'em. If it is about taking up too much space there’s probably not a lot I can do

‘name and category don’t map well’ sounds like it could be my department,

Nothing to change. The categories are really good!

The velocity on this project is off the charts. Hats off to all! 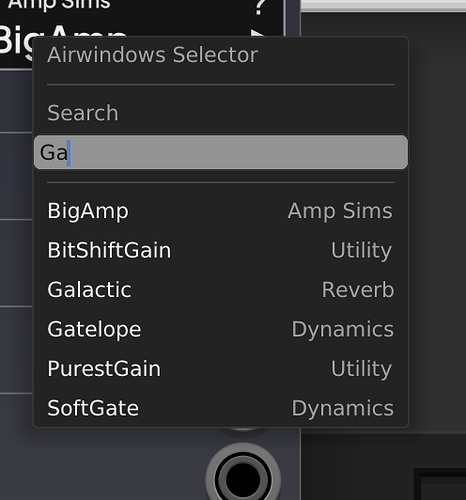 And obvious solution. Use the ‘right side’ of the menu for the category. This will be in the next nightly. Good idea.

I took some pains to try and make them work, for instance Dirt could be in Saturation but is capable of much higher gain so it lives in Distortion. Quick precis for those who are here:

Amp Sims: distortion and tone shaping, meant to work like an amp

Bass: having to do with subsonics and deep bass

Biquads: variations on biquad filters, all with comparable filter types

Dithers: a zillion dither and nondither options. Many are 24 bit dithers

Subtlety: Very delicate tone shaping that might not be obvious

Tone Color: ‘emulations’ typically with some overdrive or convolution

Utility: I’m moving the Monitorings into this category, each has a dither for output plus lots of the other options in Utility. Also, gain trims and fades.

XYZ Filters: yeah let’s just lump these together, but X was the first wave, Y are weird and experimental and have control smoothing, original Z are the ‘Z plane’ style ones modeled off a real sampler, and Z2 are that with control smoothing.

That’d be great! The fuzzy search thing is already implemented in Rack, so might be “simple” to just nab it?

Ah! I see you implemented it already, too fast for me he is

That would do it

Use the ‘right side’ of the menu for the category.

The github fails to mention the dep directory needs deleting to make a clean build.

there’s a cleanep target for that. i’ll update the README

So just pushed a change where testing would help. The airwindows collection provides a function from value to display but not the opposite. To date I had handled this by turning off the value type in in the knob menu since it was not reliable

But as I mentioned this code is super regular. I have updated my importer so that about 95% of the params now have a correct inverse function and we know which ones don’t yet. This means param typeins on the param knob will either be missing in a few cases or should work properly

Build has a collection of other cleanups also. Basically always keep updating if you aren’t

I haven’t seen any irregularities yet. But what’s curious is that in most of the modules if you write a value that is greater or lesser than the allowed range, the knob would just go to the min or max position. I am not saying that’s a bug or something really unwanted, Airwindows module reacts differently. If you type in anything more than 1 or less than 0, the knob just stays in place.

That’s one thing, another thing is… what I think (I might be wrong, I rarely use “type in” functions, maybe just to finetune something or set a precise delay time, and that’s all) it might be better to set a “mask” like “0.” and then you type whatever. Because the range is set to [0 , 1]. Again, not pushing anything, could be useful, could be not. Would be useful to me while I am testing the stuff (my cyrillic layout has all the punctuation in different places, so if I have to use decimals, it drives me insane) and useless or annoying to everyone else. Also it might be pointless to me after all the testing and bug-finding stuff is done, cause I usually just rotate the knobs and if I need some finetuning, I change one or two digits.

Oh that’s just a choice. I can max min instead just as easily if you overshoot. (In the surge vst we show an error outside of range but don’t have that option here)

I don’t have any real control over the widget. It’s just rack giving me a typein with the string value. But trimming the start of the string is a good idea!

OK I’m through my list. I will probably submit the code in the next nightly to the library unless I hear otherwise.

We still want to do some UI design work but we’ve been a bit busy; I think where we landed looks shippable after some weekend tweaks, but if we do submit as is, there may be a future version with look and feel improvements (but not port/param changes). Lets see how it is received once in the library I guess!

If you find anything critical let me know otherwise I’ll start the library process tomorrow.

Thanks for all the help here. Really useful stuff.

Have you considered something like an 80s turbo loader?

OK its submitted to the library. Will update this thread when it is there.

Hi, I noted that the display of the help text looks somehow strange after zooming in and out. Have a look, it is just open help text and then zoom out and back in with Ctrl-Mousewheel: 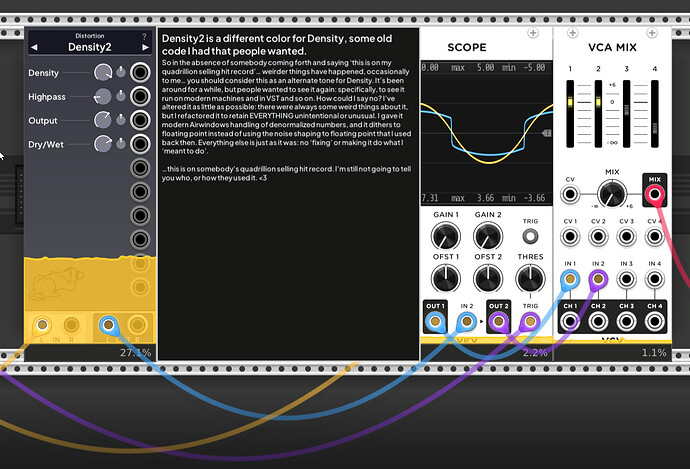 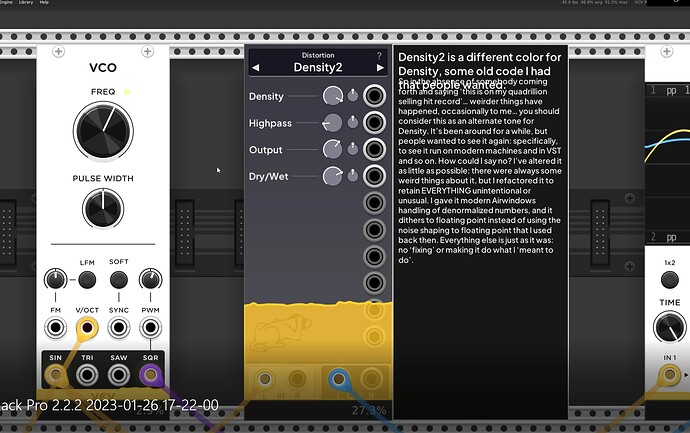 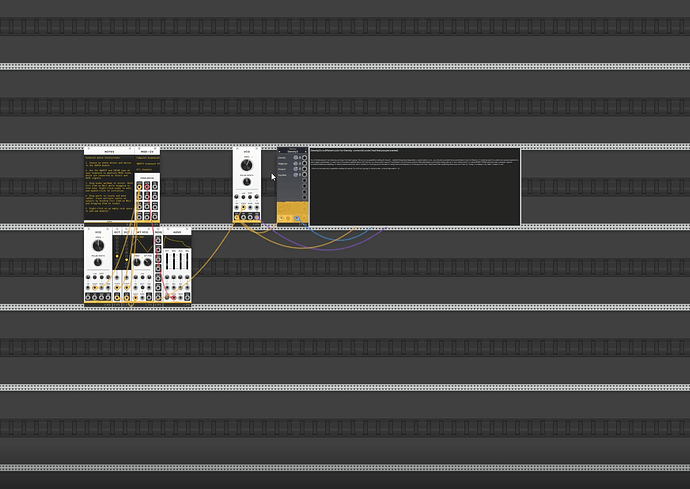 And now open the browser…