In the Mac Finder window, all the patches are still located in the “Patches” folder. On the VCV Rack menubar, however, from the “File” menu, under “Open”, the “Patches” folder shows as being empty. I’ve sent a note to “Support”, but have not yet gotten a reply.

I discovered that the VCV Module Library, after updating to version 2.0.6, was EMPTY. All the modules needed to “updated”. After the updating, the saved patches opened OK.

I spoke too soon, only ONE patch opened in v.2.0.6 after updating the module Library. The rest of them bring up a message that says, "The document [xxxx] could not be opened. VCV Rack 2 Free cannot open files int eh “VCV Rack Patch” format.

I, then, noticed that the one file that did open was saved after the 2.0.6 update, and was saved in the VCV Rack home folder, not in the “Patches” folder.

As far as absolute beginners instructions go, the “Rack Manual” could use a little work. The installation instructions tell you

But telling you to look on another page (and to do considerable scrolling to get to the bottom) isn’t very helpful, since you can’t do much without pulling in all the library modules you’ve added.

It should say in-line “Click ‘Library’ in the menu, and log in to your VCVRack.com. Then choose ‘Update All’ If you haven’t yet added any of the third party/paid modules, go to https://library.vcvrack.com/ and add modules you want to use.”

I’m not sure I’m undrrstanding your comment. Although “absolute beginner” is an accurate description of me, I’m familiar with adding modules from the library, then having to update the collection in the app, then restart the app. No problems there. The problem was that trying to open any patch files I created before updating the app to 2.0.6 displayed the message that the application couldn’t find the modules, apparently because v. 2.0.6 was now requiring the entire collection of modules that had been in the previous version of the app be “updated”.

I was just saying the manual isn’t as clear as it should be. When you update to rack2 you must log in in the rack app and update plugins. The installer only installs the program & vst, not your library.

In the Mac Finder window, all the patches are still located in the “Patches” folder. On the VCV Rack menubar, however, from the “File” menu, under “Open”, the “Patches” folder shows as being empty. I’ve sent a note to “Support”, but have not yet gotten a reply.

Possibly you looked in the wrong folder. VCV2 makes a new folder inside your Documents called Rack2. The patchesfolder there may still be empty.

I had the same issues, couldn’t open patches from the vcv open menu or from finder. I did change my name on my mac account recently so it might have messed with the location of the patches, but shouldn’t have affected opening patches from finder.

Anyway I uninstalled and reinstalled vcv. I still can’t open any patches from finder (from any folder), but I can now open my previous patches from the open menu in vcv. So that’s good.

Here’s what I get when I try to open from finder: 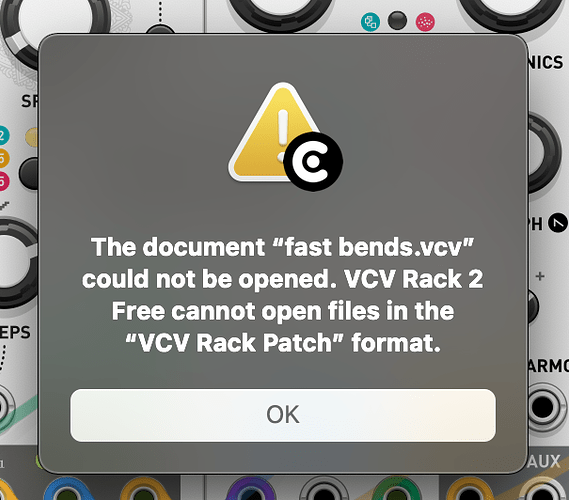