If you were lucky enough to grab multiple Mutable Instruments Stages, you can link up to 6 of them together to make a wonderful row of functions.

Would it be possible to recreate this in VCV Rack? Could the hardware limitation of 6 be removed so that MANY of them could be linked together?

Is it possible to add expander code to match the linking behavior of multiple hardware Stages when connected together? In other words, can a module be an expander to a copy of itself?

can a module be an expander to a copy of itself?

I think the answer is yes. In fact I know it is. You can do exactly the with my expandable mixers. 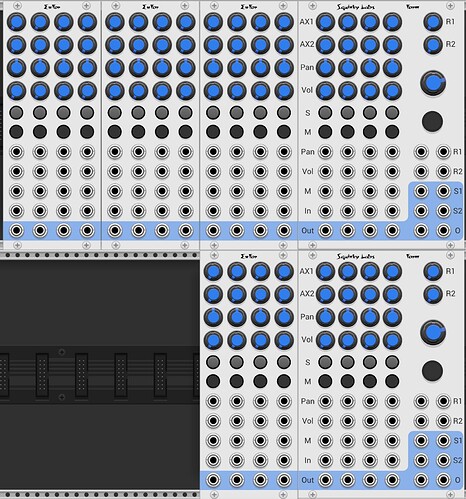 I think you missed the point - that is not representative of what outofnowhere asked.

You have a parent mixer module, expanded by multiple copies of your mixer expander module.

The request is whether you can have a parent module that is expanded by one or more copies of itself.

If it is possible, it would require a context menu option to specify whether two adjacent copies are intended to be independent, or joined. Without that, you always need a gap (or other module) between them if you wanted them to be independent.

I like the concept of a module being able to expand copies of itself. The context menu would be the equivalent of chaining hardware via jumper cables in the back.

I’ve thought about this for Glass Pane, making it be an expander for itself. It is technically possible.

Back to the original post. Idk if the mutable Instuments plugins are actively being updated any more, so I don’t know if your specific request is likely to come about. Maybe someone else has more info on that.

It’s not exactly the same, but the multiple expanders on the right are basically the same thing. Not the master, but the expanders.

My VU meters can act as their own expanders. In that case they don’t need a context menu, because expansion is the normal behaviour when you don’t provide an input.

Oh Yes! That is cool.

I suppose the same logic could be used with the Segment Generator - no context menu needed after all.