Not sure what the correct terminology is, I have practically no music theory and I’m a synth noob.

All quantizers that support just intonation that I could find appear to have fairly static tuning, which seems to defeat the purpose. Is there a polyphonic quantizer out there that allows you to constantly update the root note and it automatically adjusts the tuning accordingly? Even better yet would be one that determines the root on its own, perhaps by the lowest note, or else a particular channel. If nothing is out there, are there any developers interested in the challenge?

All quantizers that support just intonation that I could find appear to have fairly static tuning, which seems to defeat the purpose

What do you think the purpose is? You may find it helps to think of instruments with just intonation as built for the purpose of only playing in one particular scale, like a piano built to play A major. The root note defines the root of that scale. By changing the root note of such an instrument you are effectively breaking it and replacing it with an entirely different one. This may not sound too bad if you play the instrument in isolation, but could sound pretty bad if the root change happens over a harmony.

I’m just guessing he’s saying that it would be cool to have an instrument in just intonation, but then be able to re-tune it to a new scale whenever you want. And I agree. I don’t know if it would sound good, but it’s a cool idea.

While it doesn’t support things like changing A from 440hz to say 432 (interesting idea tho), thé Probably not(e) quantizers support just and Pythagorean temperaments and have a key parameter, so the tuning is correct. Is this what you need?

My upcoming Strum (centre of the attached image) module is a polyphonic (8 channel input / output) arp / sequencer / quantizer. The red knob is the root note. The v/oct & gate inputs can be used with a keyboard, when you hold more than one note it will overwrite the note sequence voltages and when you press a single note the sequence will be transposed to that key.

It’s in testing at the moment, with my current focus on making the solution elegant when used with chord modules as opposed to a keyboard. 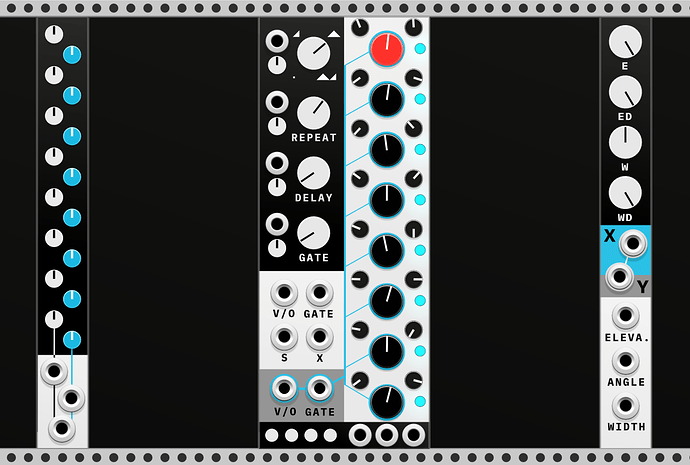 I definitely am looking for the tuning to change, depending on the notes (chord) that are playing in the moment (or even change based on prior pitches?), much the same as choral groups or fretless string instruments can micro tune to change intervals depending on the musical context. So yes, the “same” note can be tuned differently in the same piece. What started me down this road is I’m working with an emulation of the Harmonicon, which always has the sub oscillators at constant perfect intervals down from the root. The Harmonicon has a just intonation mode, which is claimed to work better with the perfect sub intervals, though I haven’t seen a demo that really demonstrates that. I’m thinking the simple intervals of the subs are not necessarily going to be harmonious with the the intervals of any fixed scale as you move up and down that scale with two primary oscillators each playing a different line. I’m in over my head, but it is something I’d like to explore. I haven’t found a free JI quantizer that allows CV control of the root. The Slime Child Substation is very reasonably priced (and demos sound great), and it has a JI quantizer that adapts to the root under CV control. But I’d like to continue with my own emulation before I get distracted with a ready built subharmonizing oscillator.

It’s free, does just AND Pythagorean temperament , root (and everything else) under cv control.

It actually does a lot more then that, but you can discover that in your own

Yes, that is exactly what I am looking for. And “good” is all in the ear of the beholder. Some ugly sounds can be quite beautiful!

Yes, that sounds great. I hadn’t had a chance to respond to your first response. I will definitely check it out. Thanks

Is it really polyphonic as labeled? I’ve got poly into note in, and all I get is mono out of Quant CV

Yes, it’s really polyphonic. Make sure your trigger is poly too

Thanks, got it working now. But it is very puzzling behavior (a bug?) The doc says "The trigger is monophonic for all voices unless the polyphonic mode button next to it is enabled. Then each polyphonic voice is triggered by a corresponding polyphonic trigger" That tells me a mono trigger should be enough to trigger all poly voices. Beyond that, once I got it going with a poly trigger, I could revert back to mono and the poly voicing carried on. I could even remove the trigger altogether, and it continued to change notes as the incoming CVs changed. But when I first hooked it up, I got nothing without a trigger. Very strange.

Working great. I’ve barely tapped into the power beyond what I asked. So far I’ve just used the Spread - it really adds some great musicality and interest to my sequence. Thanks for the recommendation. Never figured out the trigger and output weirdness, but it isn’t interfering.

Looking into the trigger issue, haven’t been able to reproduce yet, but still trying. The octave expander just got released, if you want to try that out

Sorry to send you on a wild goose chase. I fooled myself as to what was going on with my Subharmonicon emulator patch. I’m pretty sure your quantizer was behaving properly, and I misinterpreted the results I was seeing.