Anyone got stuff that heavily features VCV Rack but maybe was inspired by non-electronic music or feature acoustic instruments recorded into Rack?

Love @Omri_Cohen’s videos generally and especially those that have physical instruments! Would love to see it if you have something similar.

And yes I know Eurorack and controllers and the like are physical.

My next patch will feature some LABS vsts, but not sure that counts as acoustic

I also have some song featuring only guitar as the sound source, and i’m pretty sure i played harmonica over some patch a while ago

I should probably include even more real life instruments in my Music, it’s a lot of fun

Thanks for reminding me ! 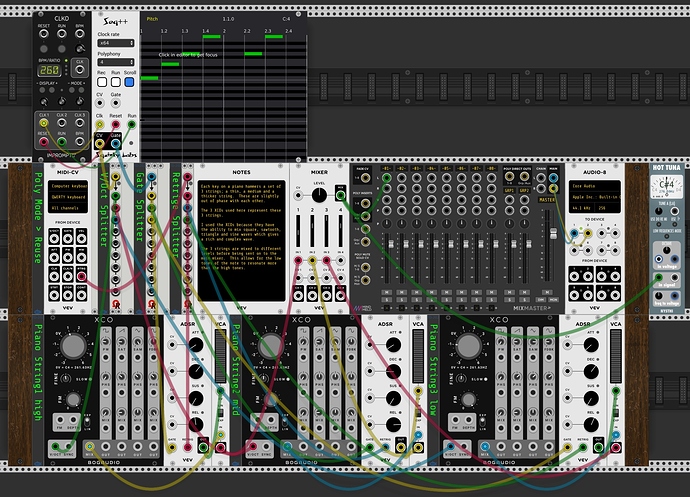 But, for many moons I’ve been dreaming about the opposite. Dedicated active loudspeakers per audio channel (or synth on an RPi). Not the typical boxes, but loud speaking contraptions with their own sound fitting the generated sound.

I don’t know exactly what you mean, but I am looking for something that sounds similar.

I like the way modular synths work (you can build your own synth) but I do not want to make generative music; I like to really play it (even though I am a lousy player). I want all my music to have some kind of funk, so I do not want to use clock-based rhythms and I want don’t want my parts to be humanized, I want them to be human, if that makes sense.

My approach to this has been semi-modular and hybrid. I build semi-modular analog hardware modules (so far I’ve built the Dreadbox Lil Erebus and the Olitronik Circuits Micron) and I modulate them with VCV Rack (using an Expert Sleepers ES-8). I use various input devices to play the patch over MIDI; my Arturia keystep keyboard controls the various bassy mono-synths (so I can play them electro funk bass grooves). A midifighter Twister controls some of the knobs in VCV. I DJ, so I use Traktor and a platter controller with a Syntablism (Turntablism + Synth) patch to scratch with sounds that are generated in VCV-Rack. (Check out Kypski for some cool stuff). Finally I have this supercheap and awesome little module from Error Instruments (Raw Spring Nano) that is nothing more than a spring and a guitar pick-up mic. When I play that with a plectrum it strums like a guitar. Using some comparators and an envelope follower I can turn this into triggers and an envelope which trigger some kind of physical modeling voice (any of the audible instruments will do) to create a funky string instrument.

I don’t have much to show for it yet. I’ve been building and practicing with it and it is finally slowly coming together (the ES-8 only arrived last month). Yesterday I updated my modulation patch for the Micron; it is now velocity sensitive (velocity controls both VCA volume and the envelopes), it glide on legato notes,it pitch bends and has tremolo on aftertouch, which makes it SOOO much more expressive and fun to play. Feeling like Stevie here… Next up is an update to the Lil Erebus patch, and then I’ll have to add in the strum & the scratch patches and see if my laptop can still handle it.

So anyway, maybe something entirely different then what you were asking for, in which case sorry