I’m not sure if this is the right place to post, but it might interest some of you.

I’ve recently been experimenting with tapes to make music. This started off about a month ago when I acquired some old dictaphones and a few interesting pieces of music came out of them! More recently than that though, I’ve been playing around with tape loops and phasing techniques, and I’ve produced this EP of three somewhat experimental tracks:

No VCV rack was involved in this EP, but it might interest some of you, I don’t really know!

Any questions about the loops or anything, just ask away, I’m here all night

Thanks for reading,
Jim

What a wonderful EP Jim, your tape alchemy certainly interests me. Thanks for sharing I enjoyed it a lot.

I love the sounds ! i’d love to know more about the process you went through for that result

For track 1 I pre-recorded the melodica loop onto cassette, then cut and spliced it to length so the playback was gapless. The loop was maybe about 50cm, so I ran it between two walkmans to keep it taught and moving. I also had the playback heads on both walkmans running, so there was a lovely delay effect going. This is especially noticeable in headphones because I panned the two walkmans hard left and hard right.

The second piece is based on the idea of phasing: I recorded a brief Nik Bartsch inspired minimalist improvisation on piano to my 2 dictaphones, then played them back simultaneously. However, due to the lovely nature of tape, they soon drifted out of sync creating this wash of arpeggiated chords that just flows through your head. The 2 dictaphones are panned hard left and right, and the tuning is a bit off at points, but hey - that’s just the way this stuff works!

The final track is the most simple - I recorded the field noise out of my window onto cassette then just played it back at half speed, thus dropping everything an octave. It creates this mindless soundfield that will undoubtedly form the basis of some future track ideas I’ve got.

Hope that answers everything

Here’s another experiment, and this one got weird!

The piece is scored for tape loop, a modified boombox, a modified Walkman, melodica, and feedback. It initially started off as a series of experiments, but morphed into the minimalist piece of music linked above. 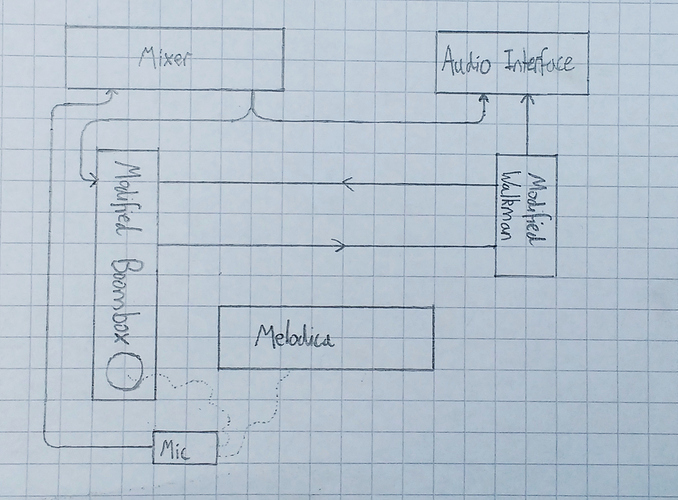 The exact setup is shown above. There is a tape loop running between two cassette players, being recorded onto by the boombox and read by the Walkman with an 8ish second delay. The erase head on the boombox is taped over, so none of the previous recording is destroyed. This creates a soundscape that is slowly built up over the course of the piece, morphing between different feelings and textures. The sound being recorded comes from the Melodica that is then sent through the mixer with some distorted delay added on. However, some very interesting sonic results pop up when feedback is utilised: the combination of the slightly old resonant speaker on the boombox, the slightly glitchy FX algorithms on the mixer, and the warmth of the tape creates a very unique palette with a wide variety of tones and noises available depending on mic distance and the chosen effect.

The resulting track is a longform piece, and evolves throughout its 20 minutes. The music isn’t deeply complicated to listen to, so creates a safe environment in which the listener’s thoughts can roam free.

Great ambience Jim. Lots of interesting textures and like you said plenty of space for the mind to wander.

I bought 3 Tapes, I found it to be lovely. I need to do more experiments like this.

Piano has been an instrument that has held a place in my heart for a long time and I’ve been experimenting with the sounds I can get out of it recently. The warmth you get when combining the sounds of the piano with various old, dying tape machines is something special, and out of this meeting I present a new EP:

This EP is designed as a partner to another collection of music that I’ve also released today: 3 electronic pieces from VCV rack that you can read about here. Both albums start from the same minimalist philosophies, but take them in opposite directions: Soliloquy with the focus on the gentle sounds of tapes and piano, divide, conquer oriented around electronic timbres generated in VCV rack and arranged in Audacity. On this EP there are 8 tracks, with various compositional processes used: tracks 2, 3, 4, 5 & 6 are just solo piano recorded onto various dictaphones then rerecorded unedited and unprocessed onto Audacity; tracks 1 & 7 are again recorded onto dictaphone, but the piano is played through a homemade tape echo - more about that in a bit; finally, track 8 is a re-amping of a snippet from an earlier collection of works - I played the cassette it was recorded on through my HiFi speakers (an old Technics system so it adds a nice bit of 70s warmth!), then rerecorded it along with some ambient sounds of rain hitting my window straight onto my computer.

Melodically speaking, the feeling throughout is quite improvisatory - tracks 2 and 3 are not my music but an interpretation of works by Bach (BWV450) and Philip Glass (Metamorphosis 1) respectively. Tracks 1, 4 & 6 are based around the chord progression and feeling from Metamorphosis 1, but altered both electronically (through the tape echo) and melodically (improvisatory variation).

The tape echo was something I had been mulling over in the back of my mind for a while. In essence there are 3 cassette players, 1 acting as a write head, 2 acting as read heads, and a long tape loop stretched between them. The erase head I removed from the recording machine, so a sound on sound wash of notes is built up, an effect I think works well with piano. As a proof of concept it worked well - it can be heard on track 1 & 7 - but there were a few niggles that still need working out: I couldn’t quite get the 3 players to play at the same speed due to the old, second hand nature of them all; also, the sound was quite muffled - I couldn’t DI both read heads into my computer, so the levels are all over the place. In the future I’d like to set up a mic for each player to get the artifacts from the external speakers, and maybe set up a couple more read heads too. Potentially you could feed one of the read outputs back into the write input… So many possibilities to try!

Thanks for reading, any feedback or questions or anything, just ask.