This is quite a big update to the XTRTN plugin.

Any feedback would be very much appreciated. If anything is confusing, do check out the XTRTN guide - I’m always adding new details and improvements there. I hope you get something useful, or at least fun, out of these modules <3 Thank you for reading

When I saw Ichneumonid I got excited because it looks like it kinda does something that I frequently do with 2 instances of VCV Octal Router, which is take several signals and switch between them, either randomly or deterministically. Octal Router can crossfade or jump instantly.

Ichneumonid seems to do all of those things. But it seems to random switch inputs – which I want – but it seems to have a mind of it’s own about how quickly to switch between inputs. As near as I can figure the switching time is a function of the Arrive & Depart probabilities along with the Crossing knob, which the documentation says “Probability of attempting a cross-over at an intersection”

To which I say “huh?” What are the intersections whereof you speak? Can you explain a little more what it’s actually doing under the hood? I notice that if I turn up Crossing much past 0.5 it switches so fast that it works as a form of distortion.

Possible enhancements – a clock input which would drive when a crossover happens. I’m all for things happening randomly but even randomness needs to happen in an orderly way sometimes

To which I say “huh?” What are the intersections whereof you speak? Can you explain a little more what it’s actually doing under the hood? I notice that if I turn up Crossing much past 0.5 it switches so fast that it works as a form of distortion.

Thanks for the feedback! I’ll try my best to explain this using pictures. So, here I have a screen shot of two scopes. On the left scope there are the traces from two input signals. On the right scope is the trace from the output of Ichneumonid. 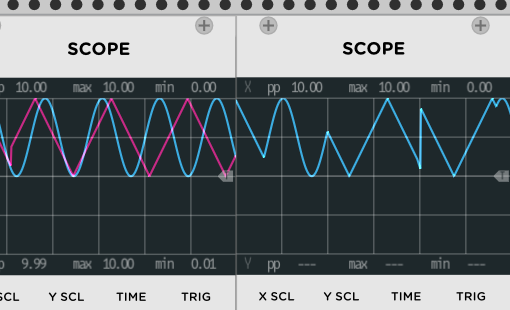 Here I have drawn yellow circles over what I mean by “intersections” on the input signals. These are the points where the two input signals overlap (technically, when they equal eachother (even more technically, when they’re within a small distance of eachother set by an invisible tolerance variable)). To create the continuous output, the module is switching over at these specific points. I don’t have any cross-fading or addition going on. My intention here was to mix the outputs without any “dilution” (I hope that’s not being too metaphorical haha) of the qualities of the incoming signals. 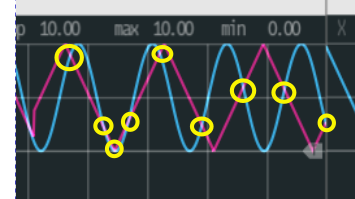 I don’t think this idea in its current form is compatible with a clock signal, as the events are at discrete moments. But I will look into what you’ve described and possibly making another module or an expander with those ideas. Also I’ll work on making more detailed in-depth descriptions on the webpage in the next few days. Thank you again

Oh this is a super cool idea. Downloading now because that’s really clever. One of the other weird, innovative switch styles I’ve seen is in the NLC Chopper (Bi-di Choppers — Nonlinearcircuits), but the results on that are not, uh, particularly click-free to say the least.