Spent almost my entire Sunday working on a patch from scratch, without any specific direction in mind. I quite enjoy the end result, but it might just be that my ears are f***** after listening to this all day.

Whow, that’s a great work. This is one of the best I’ve heard in VCV so far. Make more of it.

Wow, that is a great compliment. Thank you very much!

Given the direction that the poll on “1 thread per artist vs. a separate thread for every patch” is taking, I decided to turn this into a thread for my patches. Not sure how productive I’ll be, but every now and then I end up with something I like, among the heaps of random garbage I generally put out.

really great patch, love your sounds, your use of fx, and super cool that youre using the analog sequencer b/c that thing rocks. Will be nice to see how your music thread develops!

Thanks a lot! Yes, the analog sequencer is great! I wish it were possible to set the cv outputs as 0v to 2v or 0v to 4v instead of -1v to 1v and -2v to 2v. Some quantizers, like Scalar, only pick up notes from 0v and above so I always need to do some offsetting or attenuation of the outputs.

Okay, after a looong time, I was finally able to sit down with VCV Rack and actually produce something somewhat substantial.

After having moved countries and starting a very busy new job, I finally had some time and energy to sit down with VCV Rack again, and try out some new modules.

This is me playing with a patch I created today. I tried to do some kind of build up and break down. Some of it didn’t work out as well as I hoped, but it still sounds nice I think.

This patch basically started with my figuring out what the Via GateSeq does. Paired with a sequential switch it really helps make nice rhythms, and it replaces some of the methods I used before to create rhythms.

I also tried out the new MindMeld MixMaster. It is absolutely brilliant.

This patch relies heavily on how the send effects work together. One thing that is really nice about the MixMaster is that it supports 4 send effects.

I hope you enjoy it!

Amazing! How do you get all of the voices to come through so clearly? The bass and kick are running at almost full volume, yet the lows and the mids don’t get muddy. I didn’t see a compressor. So nice!

Thanks! There is a compressor sidechaining one of the aux channels, but I think what did the trick in terms of cooperation between voices is that most voices are gated at different moments, although basically playing the same melody (which is a juxtaposition of a 4 steps long sequence and a 7 steps long sequence). I didn’t really give it a lot of thought, to be honest, but I guess giving everything a somewhat separate spot in time prevents things from sounding muddy.

It has been ages, but here’s something fresh. Warning: It starts rather quiet, so don’t turn up your volume too quickly. 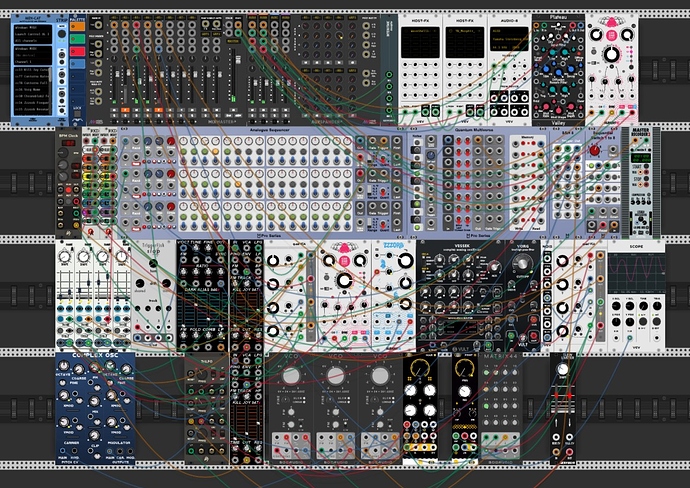 EDIT: Made another, shorter take.

EDIT: Made another take. Again, I like this second, shorter take a bit better. Not really there yet, but better.

Another variation on a similar theme. ML Analog Sequencer playing a melody with a sequential switch creating a chord progression. This is a first recorded performance with this patch, basically just letting the patch run and modulating things with the Novation Launch Control XL. The performance could probably be better, but I like it for a first run of this patch. 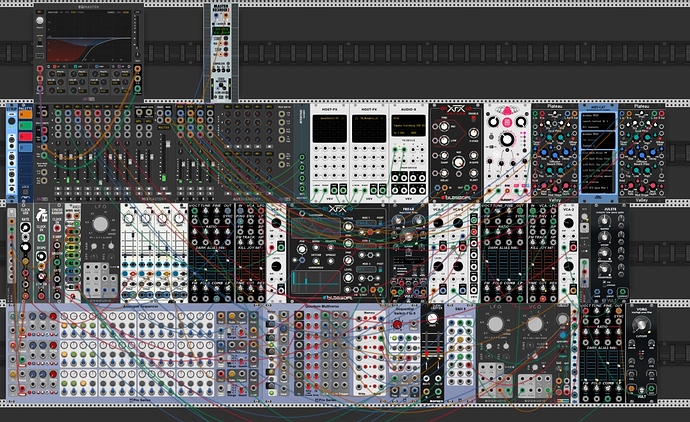