What's the synthesis behind this?

I love the sound that and old Reaktor patch called SINESTESYNTH makes. It reminds me a lot of Autechre LP5. I emailed the authors in 2013 asking how it worked, but never got a reply. It looks like it’s using some kind of wavetable lookup. Any ideas? I’d love to create something like this in VCV Rack. 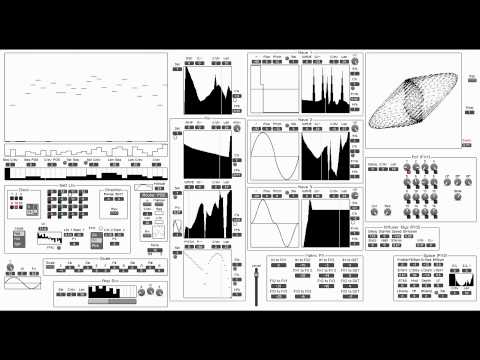 That’s awesome! Definitely FM. I would start by getting some wavetables for the new wavetable oscillator, and trying some FM with complex waveforms. Probably difficult to replicate exactly, but you should get some cool sounds.

I have not studied the pictures too much. But from what I see, read and hear…

In the video/pictures, Wave2 and Wave3 seem to show Sine based shapes. Some similar to the Yamaha TX81Z shapes. Wave1 shows pulses with various widths, but some with a discontinuity in the transition from +1 to -1 (the vertical line).

Definitely FM components in this. Basically, in PM/FM limit the use use of “rich spectrum” oscillators (stick to sines or just a few few harmonics). Then there seem to be some modulation sources/sequencers running the show.

Here is a full picture of the GUI. 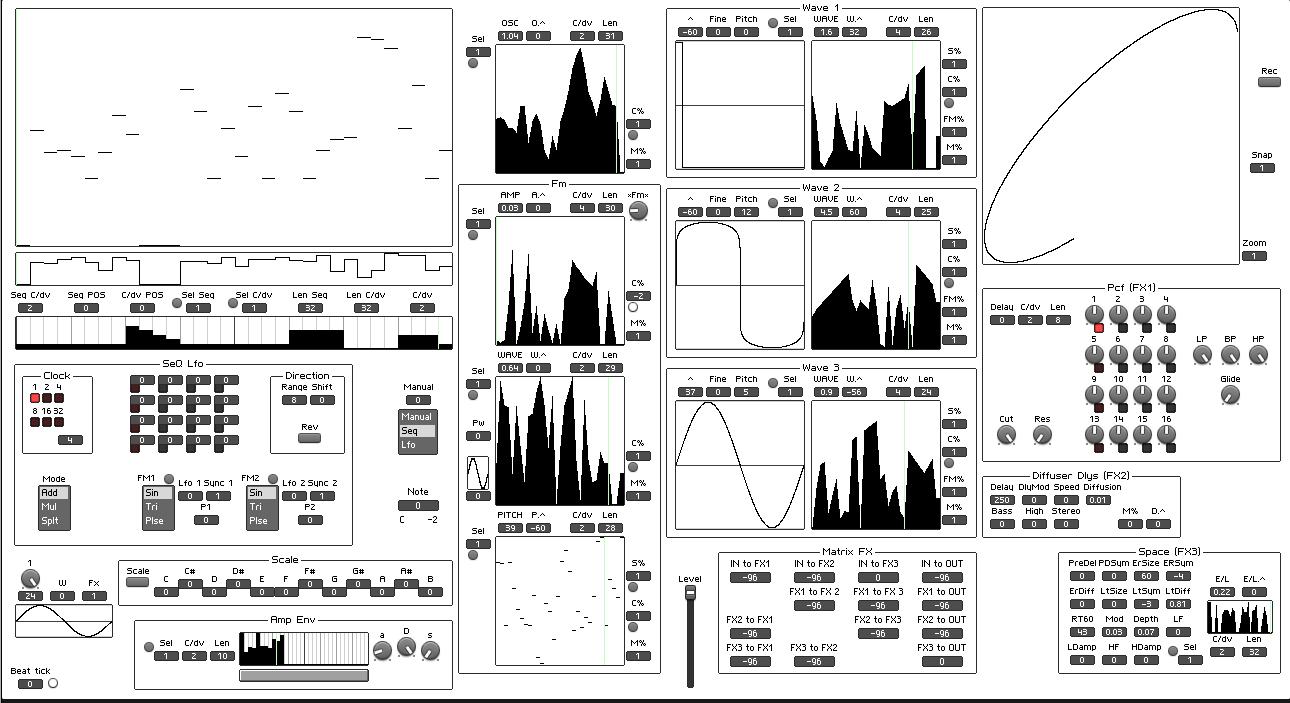 If you wanna have a closer look into how stuff works, you could try if RA1D3N will run in the (free) Reaktor Player. https://www.native-instruments.com/es/reaktor-community/reaktor-user-library/entry/show/7872/

All and all, it sounds pretty “random” in both “tuning”. “timing” and “modulation”. And yes, FM-ish. The GUI mentions FM as well.

I’d say, start with some FM/PM capable oscillator(s) (e.g. Kitchen Sink, FM-OP, TZOP). Chain at least two as a Modulator/Carrier pair. Then feed all of the parameters with sequencers/LFO and/or sample & hold.

E.g. Tiny Tricks has a convenient 16 out (internal noise based) S&H module with a single Trigger input (e.g. to feed with a clock pulse). Put some VCA’s in the modulation paths to get control over modulation amounts (or modulate their gain as well). Maybe a slew limiter here and there (with control over slew rates). Maybe a quantizer here and there to get tuned or stepped control signals. Some AD/ADSR/envelope/function generators and VCA combo’s to control the audio output levels (pick envelope controller for which you can controll the various stages).

Maybe just connect it all up and see what happens…

Thanks! I’ll give it a shot!

Try connecting a stack of Fehler Fabrik Psi Ops through Delexander Algomorph. There are some nice similarities with the demo track you posted.