What CPU should I buy for VCV Rack?

Also,I love your modules,and think they look great,too.Clean design,and I love the blue that you use on the knobs and dials.Lovely modules,altogether.

@Omri_Cohen,Thanks,I think I’ll get a decent gfx card around the $200 mark.Hopefully that should power the Modular Fungi visual artworks [Opsylloscope and others],along with the Rack UI.

I mentioned you since I always like to give credit where it’s due.Great tutorials,mostly featuring fantastic music.That’s what got me really excited about all of this in the first place.

Also,you seem to run some pretty big patches on your i7 Laptop without problems,so that seems like a good pointer.

Thanks for all of your tutorials,both the great info,and the inspiration.

@rsmus7,Thanks.That’s great news,and very encouraging.I’m happy that it’s working so well for you.

I really appreciate it man, thank you! I enjoy what I do and it’s great for me to know that other people also enjoy my work. Cheers!

Thanks, that’s very good to hear. Within the constraints of being a bad visual artist (and not having much extra time) I try to make the panels as functional and polished as I can. That blue knob is/was actually a stock VCV component - I just latched onto that blue and beat it into the ground!

I agree, it does seem somewhat counter-intuitive to limit the cores available to VCV so drastically. And it was a little disappointing to find this out after I’d bought the new system. But like I said, it’s not really had any practical impact for my usage

Just to clarify the performance hit when going cross-CCX - when running the above patch on 2 CCXs instead of 1, the CPU hit on both CCXs actually goes up by about 15% despite having twice as many cores! i.e. 1 CCX = ~70% usage, 2 CCXs = ~85% usage on both

As far as I’ve been able to tell, this is all to do with inter-core data latency. This diagram should show you all you need to know: 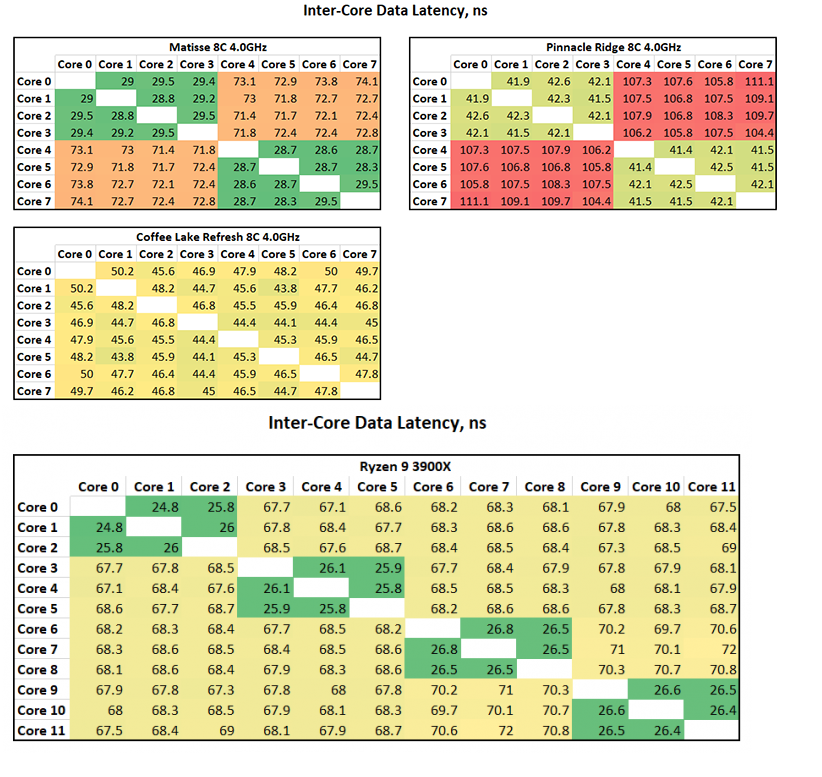 …so while, within a CCX, data latency is extremely low, almost twice as good as the Intel example (Coffee Lake Refresh), between CCXs it flies up, almost three times worse. And it indicates, to me at least, that any multithreaded application with intensive real-time non-block-processing DSP (e.g. VCV) should be restricted to running inside a single CCX on Zen 2 processors.

Whether Intel offer anything that gives you an increase in overall capacity (perhaps at a lower overall efficiency) with their newest HEDT chips is something you’d probably want to look into if you’re going for a pure-VCV system. Personally, VCV is only 1 part of my setup and I’m happy keeping it locked to a quarter of the CPU. It can still handle literally hundreds of modules.

The competing architectures are different enough now that you really have to go into a lot of detail about the nature of the applications you want to run - how they process and move data around, what processor extensions they leverage, how much power they need for a given scenario, how they spread load - before you can make the best decision on what to invest your money in. VCV, in my experience, is a very peculiar scenario to work with - normal, block-processing VST plugins don’t suffer this cross-CCX performance drop nearly as badly, having tried the likes of Diva and other multithreaded VSTs…

edit: I meant to add - I don’t think there is a way to run multiple instances of VCV on a single machine - the program stops you from doing this

Whether that changes when VCV runs under a VST host, I’m not sure, and perhaps more specifically, if it’s possible to tie instances of VCV running under a VST host to specific CCXs, also remains to be seen. Or even whether such a thing is necessary, as they will be processing in blocks (presumably)

@attheleash,That’s quite some post.Thanks for all the thought,and detail,even diagrams. I was away from the computer,so couldn’t answer till now.

There’s a lot to mull over here.For instance,although I’m quite familiar with the VST world,I don’t remember ever hearing of block-processing vs non-block-processing,till now.But it would explain a lot about your results with Ryzen vs Scan’s results.

I have Diva and Repro1+5,and many other high quality VSTs,including Kontakt,and some expensive,high quality libraries,which I intend to continue using,though I plan on selling a lot of the synth and effects VSTs that I’ve built up,now.

I have a few more things to say,but can’t right now.I need to check a few things.

Thanks again for the very detailed post/reply. I’ll post again,shortly.

One quick thing - if Kontakt / Libraries are an important part of your setup, it may swing the balance more in favour of going Intel, as there is still generally an edge there where memory bandwidth is concerned, and Kontakt is mostly about pushing around lots of sample data from system memory. VCV, I should think, is very cache-intensive, which is why core latency seems to be more important there.

I’m not sure how well “cinematic and orchestral” will work with modular,but I’d like to find out. I’d thought of running my VSTs in VCV,using the VST Host module,which is very reasonably priced. It seems to me that the “generative”/sequencing capabilities of VCV could work brilliantly with Kontakt,and also with good VST synth and effects that I already have.Mind you,this is just hopeful speculation at this point.

I was just checking out the Intel 10900k [10 core/Ringbuss],and I think that shows a lot of promise,even though the Intel tech isn’t as shiny and new as AMD’s.

One other thing : Does VCV Rack really have something built into it that only allows one instance per computer ? That would seem crazy to me.Sync’ing clocks shouldn’t be any great problem.Don’t know about outputs though. Maybe Expert Sleepers software,and virtual audio cables,or even a multi-input audio interface ?

Anyway,thanks again for all your very helpful advice. This is my first real post on this forum,and I didn’t expect this amount of help.Seems like a great community,to go with the great software.

That looks really interesting… I built it and it runs OK on my Mac.

That would seem crazy to me

Feel free to fork it and change it. I don’t remember anyone ever requesting that before.

The Kontakt stuff works great sequenced and played from VCV through Host and Host-FX. I did a patch a few days ago with the Electric Sunburst Guitar, Strummed Acoustic and Spitfire Audio Labs Piano Pads (look on Facebook). I’ve also done stuff with Massive, Massive X, Discovery Series West Africa, Hybrid Keys. Since I can’t play an instrument, I let VCV play them.

I’m not even sure what that means,so I assume i couldn’t do it.

I think,based on what’s been said,that running 2,or more,intances would probably benefit anyone using AMD processors.

[Is it okay to call you Squinky,or do you like the .Labs added on ? How on earth did you think of the name,anyway ? It’s great,by the way].

I like the sound of that,Rick,especially the use of Kontakt.

Electric,acoustic and electronic/modular could be a fantastic mix. Whether or not I can pull it off is entirely another matter

I’m not even sure what that means,so I assume i couldn’t do it.

Oh, I just meant it’s open source, you can change it if you want. I have a natural aversion to “customers” (end users) implying that reason a particular feature wasn’t implemented was because the developer in question is stupid, crazy, or otherwise disabled. but I got no skin in this game…

Squinky is sort of an in-joke, slang made up by a friend maybe 30 years ago. Glad you like it!

I just used “crazy” as a throw-away word,here. It wasn’t a loaded word,nor potentially insulting,like stupid may have been,and I certainly wasn’t “aiming” it at anyone. Just one of those instances where text is lacking in nuance,I guess.

FWIW,I think that the whole VCV endevour/adventure seems to be very openly and fairly run,from what little I know of it [eg : the Mission Statement ,and parts of some threads touching on developments/changes]. I’m not sucking up,here.I arrived here just after discovering Voltage Modular,and finding that not only were there many more Vult modules for VCV,but that many were free,and the others,much cheaper. I think the arrangements here seem much better,at least as an end user.

Anyway,I’m,literally,just starting to learn about modular,virtual or otherwise,and know nothing about programming,so there’s no possible chance of me trying to change any more than maybe some colours.[Not your blue knobs and dials,though

That’s my first official welcome,so I feel all warm and fuzzy now

Also,I’m looking forward to trying out your modules - many are very appealing,and,I hope it goes without saying,not just visually - as soon as I can get a PC that will run the Rack.

I hope it goes without saying,not just visually

They are very plain. Some people like that, many don’t. but don’t worry, they’ve been called much worse by others.

“They are very plain. Some people like that, many don’t. but don’t worry, they’ve been called much worse by others”.

I wasn’t being snarky,either then,or in my last comment. I meant that many of your modules are very appealling - they sound great,and are very cpu efficient,and are also very visually appealing. Ireally do like the clean,unfussy designs.I especially like “Formants” ,“Chopper” and “Shaper”. Also,I think Chebyshev sounds fantastic.