weird observations about the mindmeld mixer

ok before the pedantic types try to shut down discussion and tell me to open a ticket on github let me state that i am not sure that what i have observed would be considered a bug, or even what is going on. rather id like to discuss what is happening, like you know what forums are for etc.

i have noticed a couple strange things regarding the audio routing with the mindmeld mixer. the first strange thing is that if i try to insert a bark clamp compressor between a voice and the mixer the audio will glitch out and stop all sounds while disconnecting and reconnecting cables to put the compressor in line with the mixer. not just the audio for that single voice but the WHOLE patch. wtf is that about? its like the single compressor controls the audio of the entire patch sort of thing.

second if i place an ozone instance between the mixer and a recorder (both the vcv and nysthi stereo recorders) to use as a limiter its like the audio bypasses the host and goes straight to the recorder. several times i have inserted the ozone limiter in line set the levels well under clipping and observed the waveform in ozone while recording. yet when i open the recording afterward in a daw the signal is very hot and the audio clips as if there was no ozone in place when recording. its like the audio routing just bypasses straight into the recorder. very strange.

i can only conclude that the way the mindmeld routes audio is different than the way that other mixers like say the mshack mixer route audio and it leads the strange things. its like the audio routing is on a global level for a patch rather than a single module in the chain. i dont know if this stuff is considered a bug but its definitely not behaving as expected.

Sorry to be pedantic but Bark Clamp is not a compressor. As the name suggests it clamps or rather hard clips the signal, it is not a limiter either, not in the traditional sense of how a limiter will limit a signal.

Hi, I’m part of the MindMeld team and if you can post a simple patch that narrows into the problem, preferably with free modules/VSTs, then I can take a look. From your description, it seems really weird though, we have seen our mixer used in many patches and never seen anything like this. I assume you have the latest version of Rack and MindMeld?

Hi Phil, Steve and I have been running some tests to see what may be happening, and we have noticed that when Bark Clamp has no inputs connected, it’s sending 10V on the L out, and -10V on the R out. Is this the expected behavior?

What is perhaps happening in @dronehands case is that those voltages will send MixMaster into it’s soft-clip region since it’s saturating the overall mix. In some mixers without softclip, this is perhaps ok, but in this case it may explain the problem.

MixMaster has a DC blocker option in the master that can be turned on, which seems to aleviate the problem, but all this is just wild speculation, since we need to see a picture of the patch to be able to say more.

@marc_boule This is expected behaviour when the inputs are not connected on Clamp the offsets are output, so the offset knobs can be used to control something.

Hi Marc, I wanted to ask you if there is any place where I can find information on how to connect the HOST to the MINDMELD mixer to be able to use an SSL channel strip, I know that it is convenient to mix in a DAW like Reaper outside the RACK so that it is not too heavy with the CPU but I would also like to know how the MINDMELD INSERTS work, thank you very much!

Hi @matiaskritz , I’m not well versed in SSL channel strips unfortunately (perhaps @steve will know more about this) but as for the inserts, they directly interrupt the signal flow near the inputs of the mixer. So with the Meld and Unmeld utility modules and their THRU jacks, you can set things up so that other channels are not interrupted, but the ones you want can be re-routed through an effect in HostFX (if I understand you use case and your question correctly). Here’s an example where an effect is to be added to track 2 directly as an insert (as opposed the the usual send effects that are in the AuxSpander). Hope this helps! 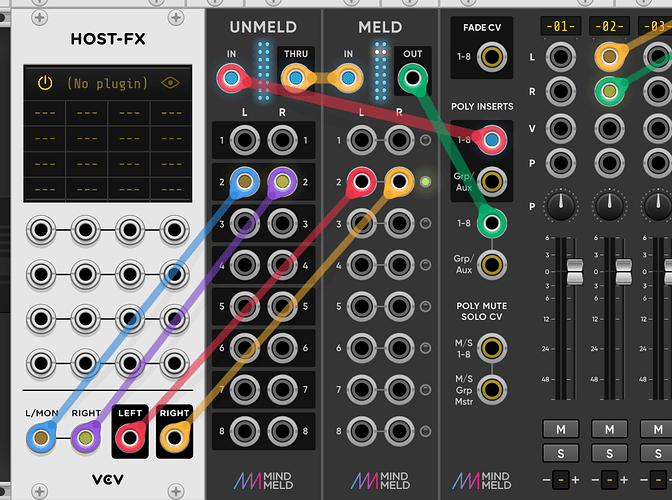 Of course polyphonic effects make this much easier, which can be a reason to use vcv native processing on those inserts, yes?

Yes indeed. If one wants to specifically use a VST channel strip then the method Marc posted above is the way to do it.

But the ‘native’ Rack way of adding polyphonic EQ and Compression would be with EQMaster (up to 24 stereo channels) and your very own CompII (8 stereo channels per instance) like this: 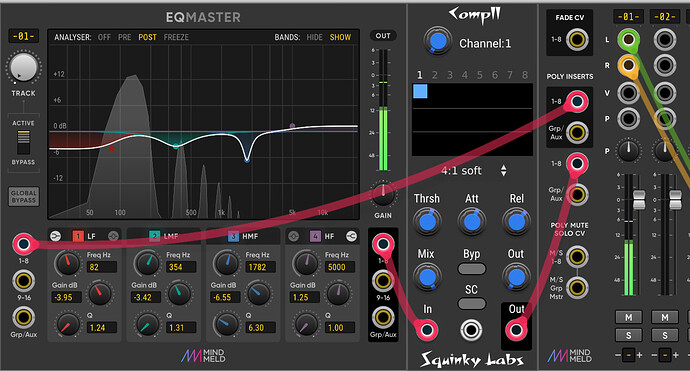 Marc, I am very grateful for the answer, it was really very useful, I send you a greeting and I hope you have a good weekend!

Between Marc’s answer and yours I was able to clear up several doubts, thank you very much!