for this edition, the challenge is to make a patch with frequency domain’s grains of wrath

deadline: monday end of the day, wherever you are, february 8th (though late entries will still be added to the playlist)

just a note for everyone attempting this challenge. The grains of wrath can load up to 16 samples and take up to 16 live inputs for a total of 32 grain sources. each grain randomly chooses a source based on a weighted probability controlled by the Weight grid. If a source has a weight of 0, then its probability will be 0. If all the sources are at 0, then you won’t hear anything

I don’t do much granular synthesis (although the sounds you get out of it can really be spectacular). I remember using AudioMulch way back in the late 90s, and that’s probably the last time I played around with grains.

I took a Squinky Labs Saws and threw 3 Grains of Wrath modules on it and tweaked them and I liked it! I might have to start using it more. Anyhow, here’s a quick patch called Holiday in Hades (sometimes you can hear the Robot Devil tuning his violin). 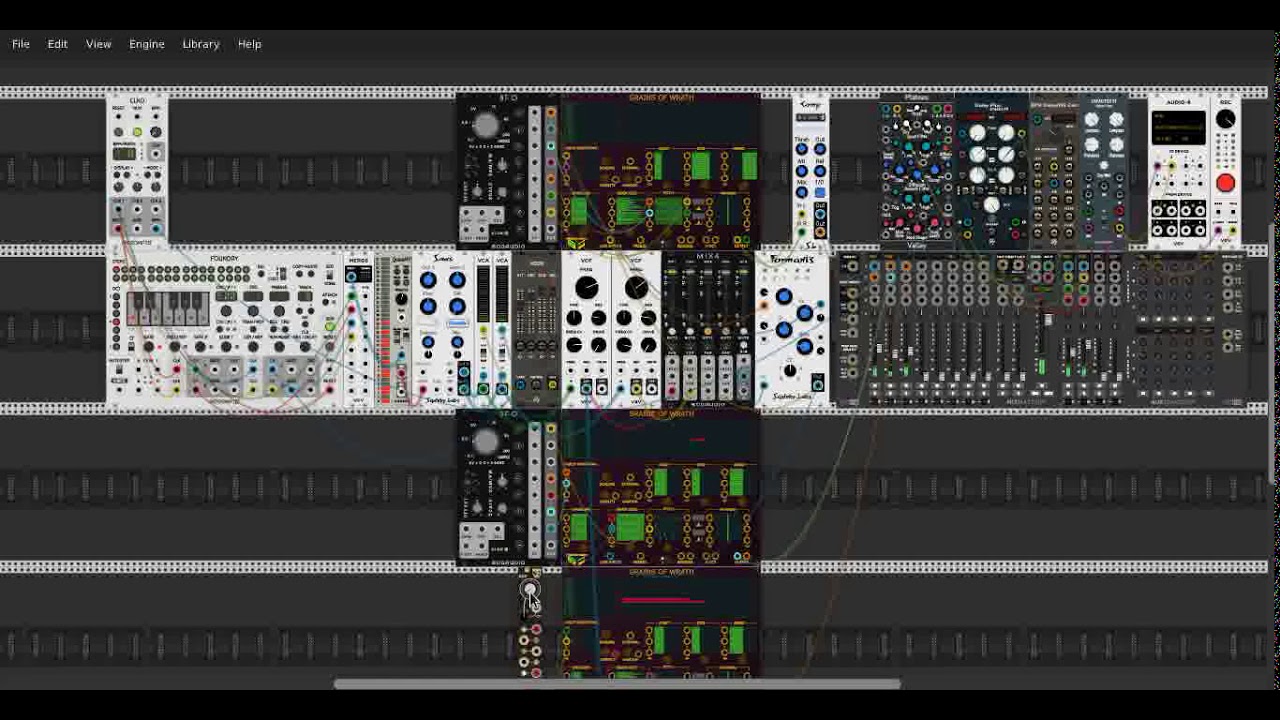 I don't do much granular synthesis (although the sounds you get out of it can really be spectacular). I remember using AudioMulch way back in…

sounds cool! Don’t forget to have fun with the panning grid!

+1 for Audiomulch. Automation was a pain at times but still a fun piece of software!

I actually had the panning set up to the LFO and then disconnected it to tweak something and forgot to connect it again. I blame old age. 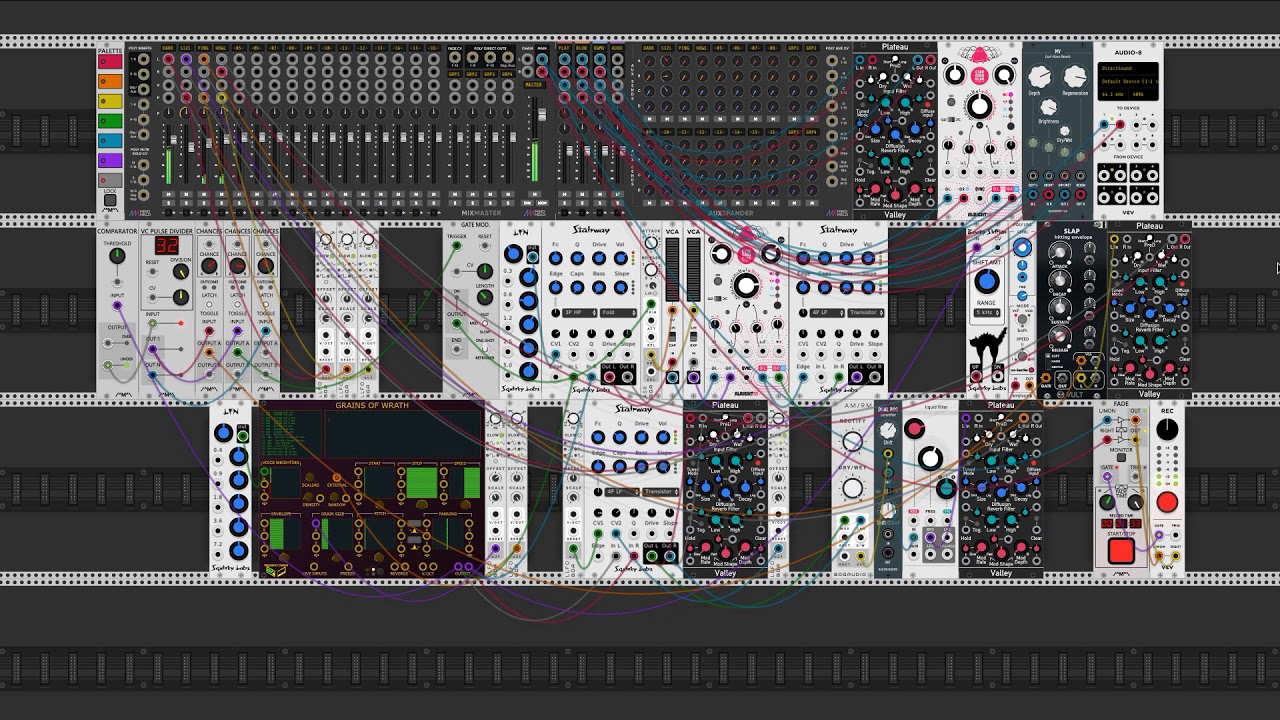 Using Grains of Wrath to make some dark ambience. The GoW is the only sound source and is processed in several different ways to create the various textures.

The samples come from a the Galbanum Architecture Waveforms 2010 1 set of Serum wavetables (https://www.reddit.com/r/edmproduction/comments/2jhew1/1700_waveforms_for_serums_wavetable_download_link/)

I just loaded the folder but here’s the list of samples: 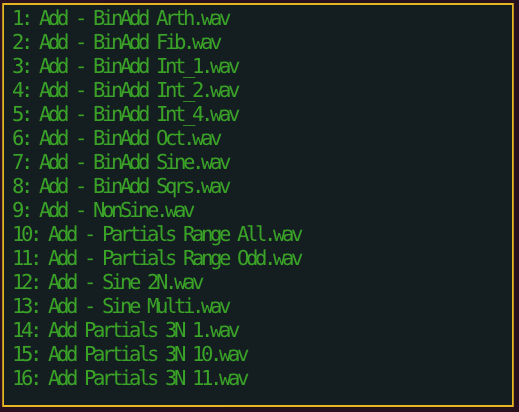 Hi there, thanks for this challenges, as a vcv-newbie like me it is a perfect way of exploring new things. So here is my patch: vcp-58 | Patchstorage 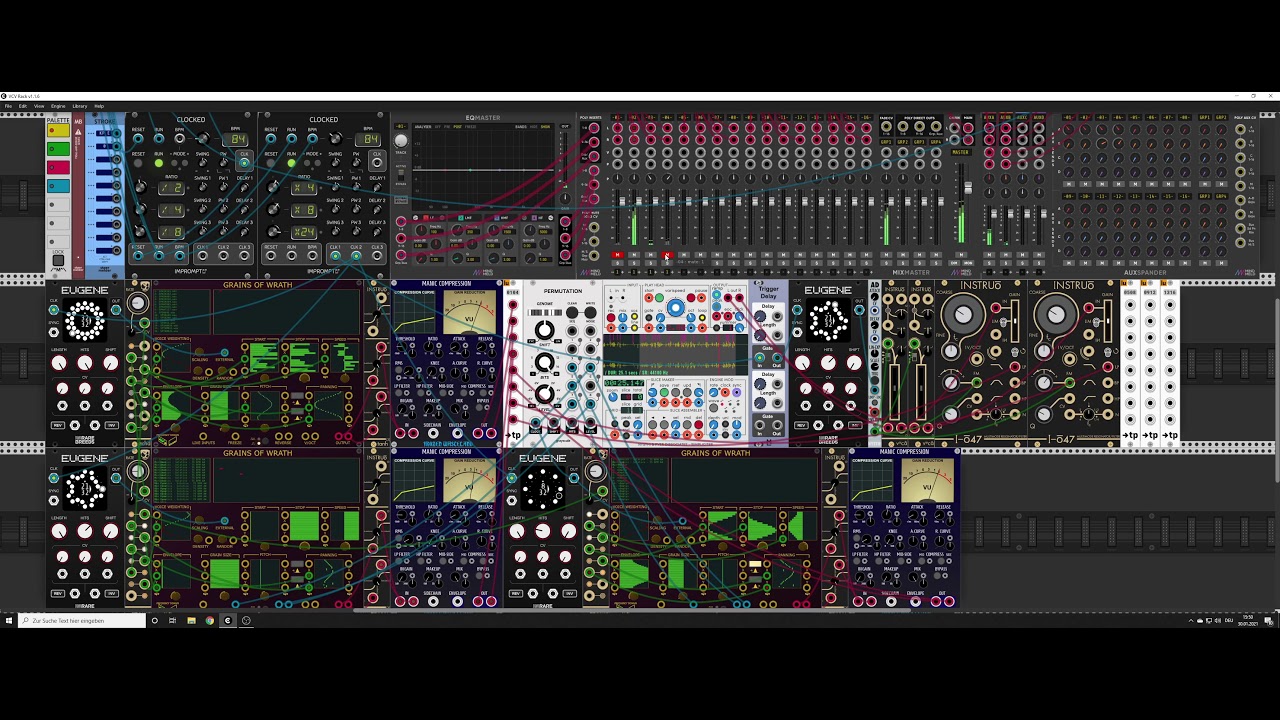 In the first instance of GoW I used a drum-sample-pack I got for free somewhere, the second are a few melody and harmony samples and the last one is some lead sample. All instances are send through the instruo tanh and are heavily compressed. I sampled the output of the second GoW, reversed it and sequenced it to get some rhythm. Well, experimental, but interesting.

I hope I'm allowed to ask some questions? And they're not only meant for this challenge but to get a better understanding of GoW.

After reading the manual, I have several questions about GoW:

1 About the voice weigthing: I can't get to grips with it. Whatever I do the voice weighting always picks the top eight voices. I've tried a couple of things, but I can never get the bottom eight voices to respond: what is the reason for this?

2 The V/Oct input doesn't seem to do anything? What is it supposed to do? The screenshot in the manual doesn't even have that input.

3 In the manual is stated that freeze and reverse can be either gated or triggered; is this selected with the push button inbetween the two inputs? And which is which?

4 What does the scaling button actually change?

Thnx for your time. Enjoy.

Thank you. A great help.

Here’s another patch to throw on the pile. With sincere apologies to both Bela Bartok and Bernard Herrmann, here’s some microtonal Pyscho-ish synth strings. I was working on something else (as usual) and had the clock set too fast, and it sorta went from there. Anyhow, here you go.

With sincere apologies to both Bela Bartok and Bernard Herrmann, here's some microtonal Pyscho-ish synth strings. Hey...this just took a few minutes to throw together,… 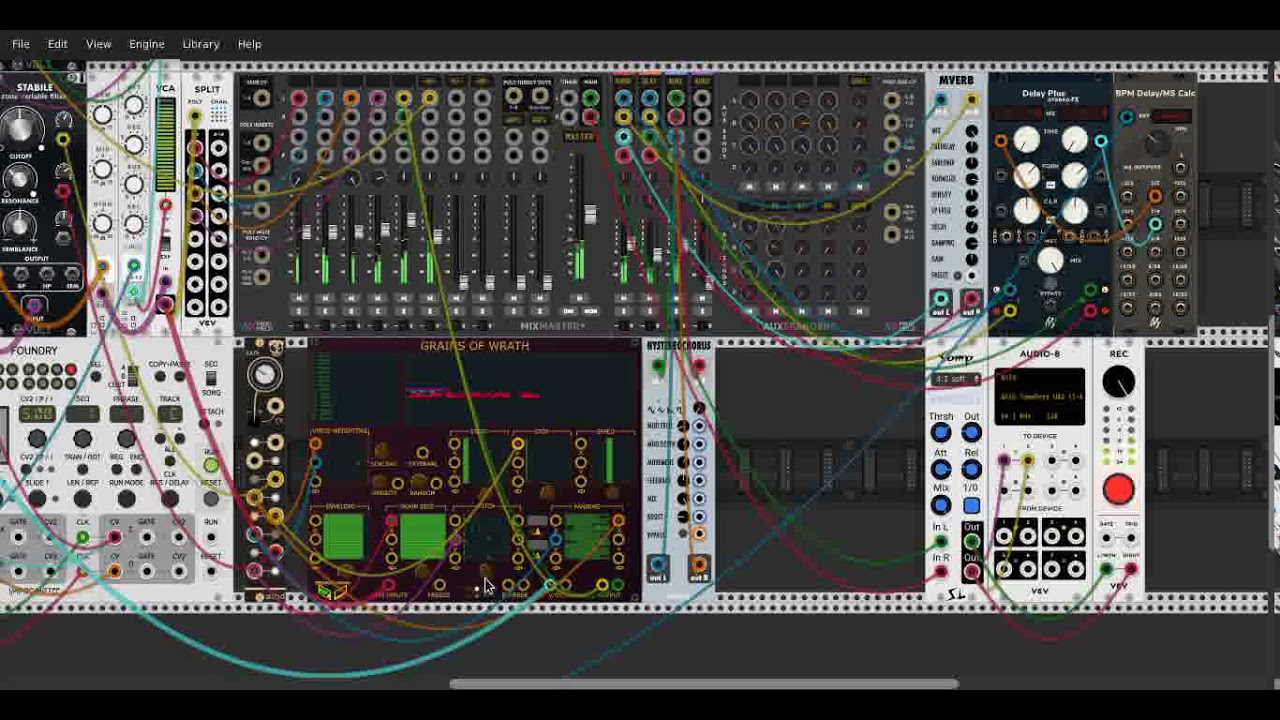 This patch has a number of things I’ve been working on (microtonal stuff, trying to dial in a hollow sawtooth sound, etc.) and I decided to crossfade the whole mix into Grains of Wrath and then back out. I’ll probably rework this in the future, but here’s the rough draft. 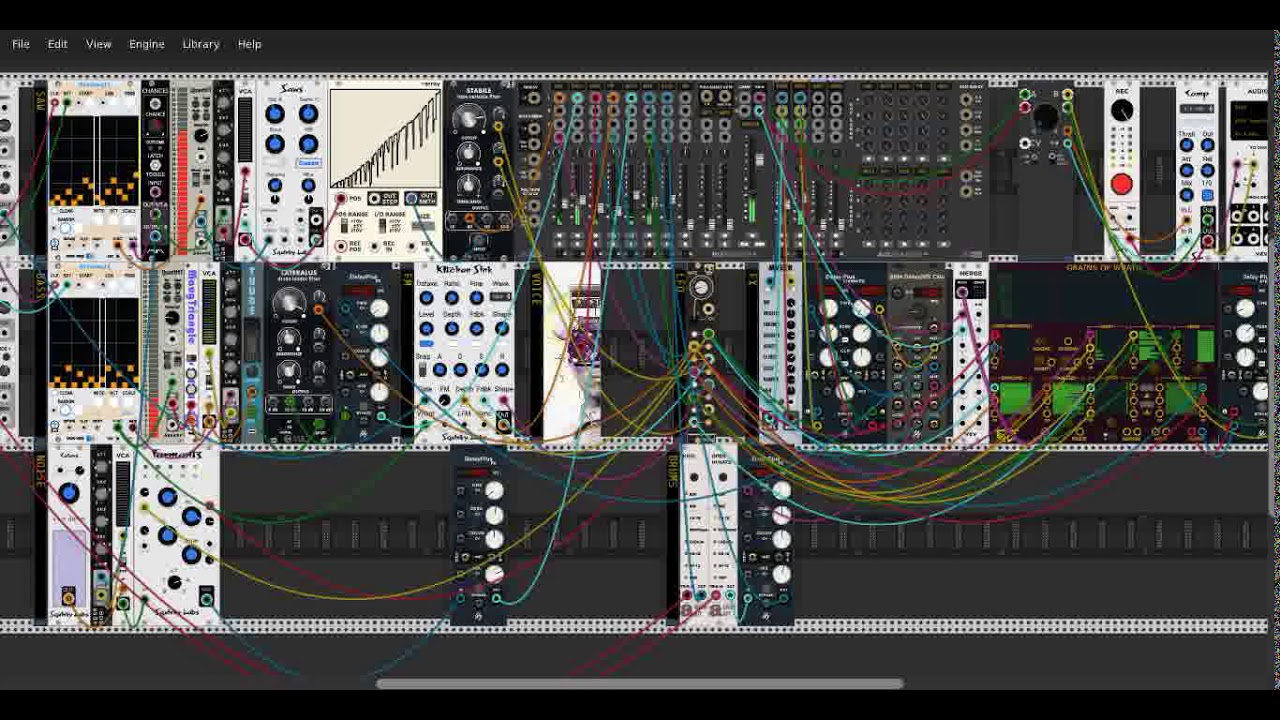 This patch has a number of things I've been working on (microtonal stuff, trying to...

I have tried using Grains of Wrath on several tracks none of which came out at all musical.

In the end I have broken several rules - I have used Substation which isn’t free - as an additional sound source. I also didn’t know how to pack all the samples which came from various places on my hard drives. I thought I would share it anyway. Based on a combination of woodland samples and samples from the Apollo 11 flight.

Listen on headphones if you can.

SLIGHT EDIT: SubStation was a new purchase. I so wish I had seen Jakub Ciupinski’s excellent tutorial before I created the above. https://www. youtube.com/watch?v=LXI9UFKFqIc I didn’t want the tutorial video to show here so I just put a space in the URL.

broken several rules - I have used Substation which isn’t free

My VCO “Substitute” is free, but it’s only the VCO section. It’s quite good, though, imao.

Hello there, This sounds beautiful, how can this not be musical, a nice relaxing ambient piece! Were the other attempts less musical then?

No I meant that the non musical ones were where I attempted to use Grains of Wrath as the only sound source, which is why I introduced Substation for this one - therefore making more more musical;

That sounds fair enough, I like Grains of Wraith as a sound source, it’s all down to personal preference. Just got to feed it lead and pad sounds of synths, guitars and out comes mayhem!

All I did here was a bit of a “soundscape” with some added speech synthesis to make it sound pretentious. 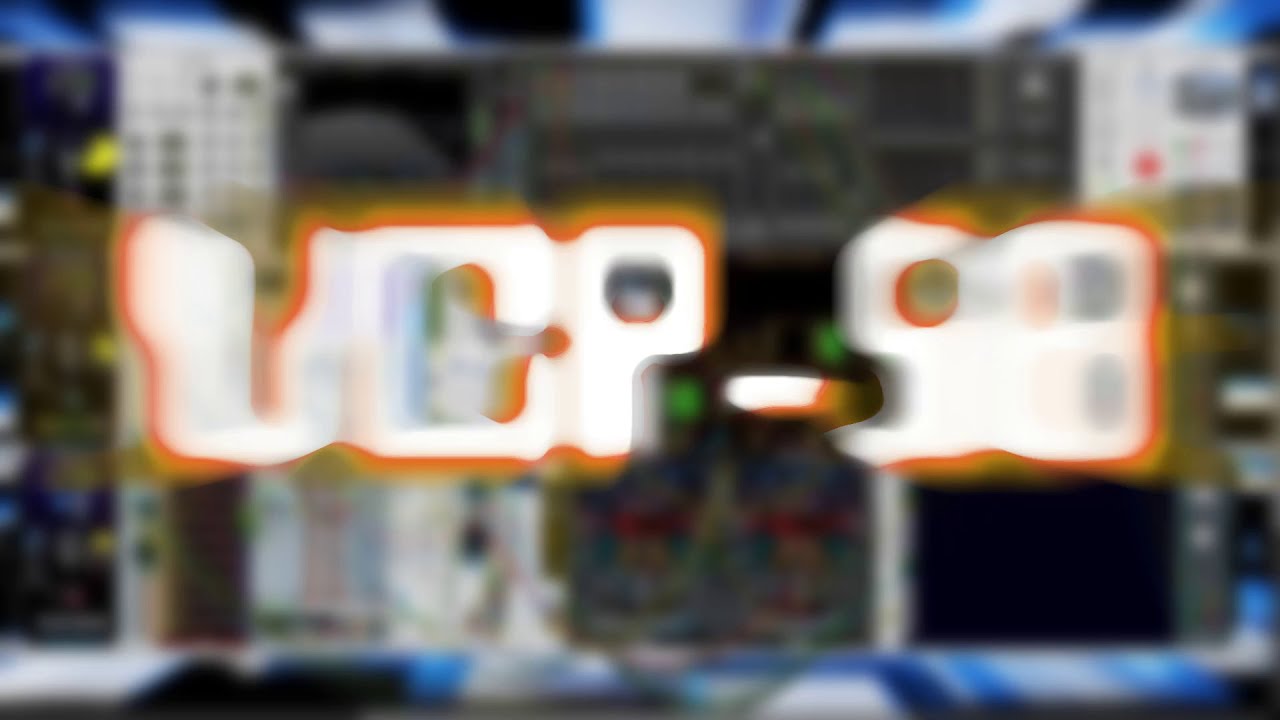 I made a small sequence, added a drone and put that all through the Grains of Wrath. I only modulated the grain size and pitch. I felt that was enough variation. I feel like I should have got this done more quickly but there you are. In terms of mixing stuff I used Bassmaster again but I really don’t know whether it did anything useful. I have this habit of starting to use a module with subtle effects on the sound that I can barely hear and then getting bored with it after I’ve convinced myself that it doesn’t do anything. The text is just something that came into my head when I was messing around with things.

What do you think @almostEric? Is this good enough for your module?

I think it sounds great