for me - apart from playing snake on my first cell phone - the most played incarnation was Curve Fever 2, which was (maybe still is) also a flash based online multiplayer thing. it features smoothly curving snakes instead of only 90 degree turns. has ffa, teams and powerups. great game! easy to start, hard to master. 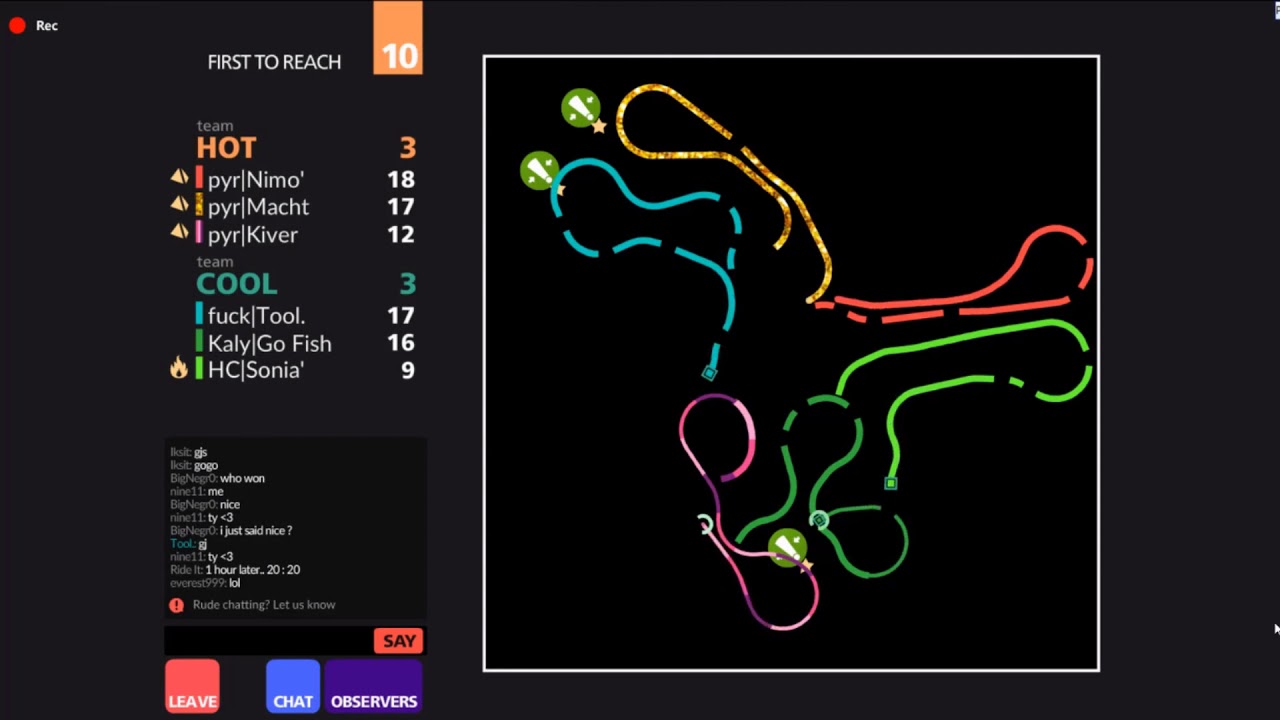 My most played version of Snakes was one I wrote on my Amiga in AmigaE.

the most played incarnation was Curve Fever

It makes use of a new feature coming to towers, that lets you sample the IN port for setting the faders.

In this example the top bank (A) is used by MIDI-CAT and the bottom (B) by TRANSIT.

Each bank’s output is connected to the other bank’s input.

The lower half of the screen is a simple virtual midi controller running outside of Rack.

Reading presets with fade requires some helpers from Bogaudio

Further you could hook-up external controls to trigger the copy action and save snapshot, and of course you need to switch between the outputs of bank A and B whatever they are controlling.

This “copy” feature is not yet available in the library, but you can download dev builds from here.

In case someone tries out these builds, please report back if they aren’t working, as this is the first time I use github to automate cross-platform builds.

Btw, thanks to everyone who contributed to this thread on Azure Pipelines!

EDIT : realized I’ve been going off-topic and turning into a tutorial on towers with this so I’ve moved this comment from here to here.

The EXP random out from VCV Random is inputted to the top fixed voltage row.

The bottom row is controlling how much modulation to apply. It is set to bipolar mode to be able to go down or up. Since it’s output is also polyphonic it can control the faders individually. In case the channel count doesn’t match perfectly, towers wraps around whatever it gets.

Here 4 channels control 8 (based on a mono IN), in a way that every 1st in a row gets increased, every 3rd gets lowered and 2nd/4th are left as they are.

The mod knob is turned a bit to the right. It controls the overall scaling so when on zero (12 o’clock), no modulation gets applied.

This way you can selectively introduce randomness or controlled change to your fixed voltages without having to break in or out of polyphony.

Made a new module, pianoid!

I also improved on towers’ music notation view (seen above), added a “windows” view for better viewing of gate signals and fixed some things (see changelog for details)

If anyone wants to try this out before it goes to the library, here are my dev builds

below, I paste the entry on pianoid from the manual…

made for visualizing notes coming from a midi keyboard, generative sources etc. it can function as a sort of “sample and chord” for people who are comfortable with playing chords on a piano keyboard. inputting notes with mouse is also possible.

toggle sustain with the sus button

when sustaining, pianoid will sample notes that are pressed together and hold them until you play the next chord

sustained notes get saved with the patches (and presets), so if you close a patch, you don’t lose what you had sustained, you can also use 8FACE to buffer different chords and automate progressions etc.

if no input is connected, you can play notes with your mouse

Haven’t said this elsewhere, but I sure do love the aesthetic of your modules! This new module looks super cool.

Thanks! This one was inspired by messing with a toy melodica, wish that had sustain too though

I had this module on my computer for a while now (actually pianoid was made so it could help visualize this amongst others), maybe it will be ready faster if I share it as it is now.

based around the idea of avoid notes, it takes a note input and a polyphonic chord input and has a few knobs to set intervals you want to avoid.

Input notes that are contained in the chord aren’t avoided.

The defaults will give you nice harmonies if you input 4-note chords.

For example on a C major seventh chord (C E G A), it will automatically avoid everything outside the C major scale, and also F, which tend to sound dissonant over this chord because it is 1 step from E.

detailed break-down : when I say it “automatically avoids everything outside the C major scale”, I don’t mean it makes a “guess” based on the inputted CM7 chord that we are in C major, it has zero knowledge of scales, the “majory” scale arises from checking for the “forbidden intervals”.
If you look at a keyboard and press down the C major seventh chord (C E G A), every black key will be at 1 step from one of the those notes, and since the first interval is set to 1, these are all avoided, leaving a major scale.
Furthermore, F is 1 step from E (also 6 steps from B), so it will be avoided as well.
The exception in this case is B that is 1 step from C but since it is in the chord it will not be avoided. Every other white key is fair game since they are either contained in the chord, or they aren’t 1 nor 6 steps from any of its notes. Of course this works with different chords, intervals, but the piano layout makes it easy to explain it with C major.

Overall it seems to be a good way of generating melodies from chords instead of scales, it’s useful for playing notes above subsequent chords that aren’t in the same scale, or that don’t fit into a list of pre-known scales.

Below is an example walking through some chords

The interval knobs are at the default settings so if the input random note is a minor second or a tritone away from any of the chord notes, it will be avoided, and the closest note from the current chord will be used instead. I’m not changing anything to these settings here, only inputing different chords with keyboard.

The inputs use gates as well as cv here, but I might leave this out later (although this is good for not having to calculate new notes all the time, and for “keeping a voice together” as the gate cables follow the corresponding cv through a patch).

The panel is definitely not final (I’ll add small displays to show the interval steps for sure, and change the layout), how it works is up to changes as well, but I’m not sure what else it needs…

Tell me what you think!

now that I start to remember where I left this off, here some things I’ll do before it could be considered finished:

updates are in the dev-builds

Any thoughts on how clear what the module does based on the above explanation or the new panel?

nevermind, added it back, it was meant to be used just its function wasn’t implemented yet (it is now), which is to ignore notes when playing from keyboard and not holding down the maximum allowed polyphony.

this layout might be confusing in that it makes it seem like the CHORD input is an optional cv input for the interval knobs, when actually, they are separate things. maybe adding cv in to the knobs will make this a non-issue.

hmm… maybe it would be much more clear if there would be 6 on/off switches for each possible interval instead of the knobs.

the MODS input is not working now, but it will let you set all the intervals at once through a 6 channel polyphonic cable.

also changed the styling on the sus button of pianoid to use the same color logic as here : bright means on, dark means off now, but it might be better to use the accent color in place of bright, or add some lights, cause it is a bit confusing…

fixed it, now this can be used to see the “scale” you get for different chords and intervals

the problem with the buttons is it is much easier to enable too many of them and being left with just the chord-notes as output, while using the knobs meant you changed intervals instead of add/remove

so it is more understandable but gives more chance to have uninteresting results.

Trying out a third option, that is just one knob that goes through all the permutations of the six toggles. It is impossible to have a “best” order in which it does that, so I’m a bit hesitant with this solution, but overall it is much better to experiment with than the buttons, it is faster! But if you want to have a specific setting it might be frustrating to find it…

Trying to order the permutations now, they are separated by how many intervals are being avoided, and inside those groups I also try to make it so it goes from avoiding more of the “dissonant” intervals (m2/m3/TT or steps 1 3 6) towards avoiding more “consonant” stuff (M2/M3/P4 or steps 2 4 5). I got bored with it for now, so only the first 2 group is ordered, but I’ll do the rest later. Maybe I should just leave out the groups with 4 and 5 avoided intervals altogether, since those avoid almost everything on even single-note chord inputs, also turning the knob would be more comfortable if there weren’t 64 separate states.

Reworked the panel too, it is getting slimmer which is weird.

Here is an example: 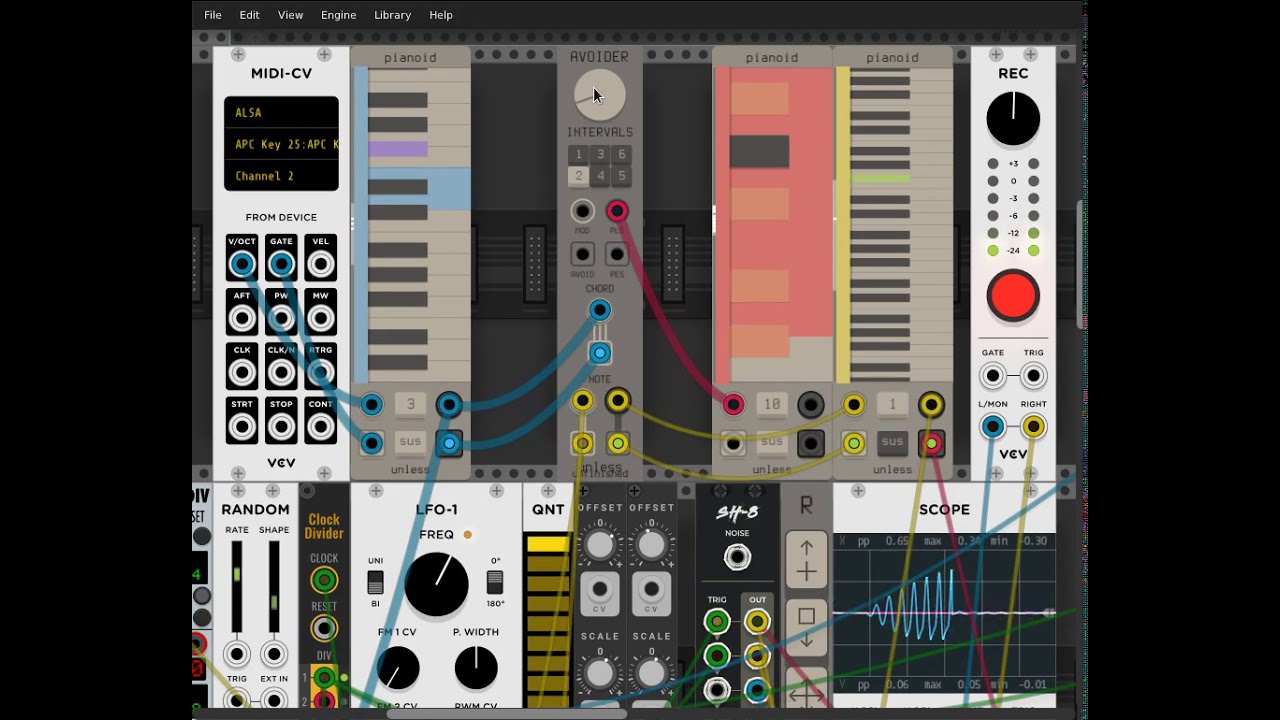 Here comes a fourth option, which is having two knobs, one for selecting the group of intervals and one for setting how many of them are active.

I came to this solution as the number of intervals you’d want to avoid depends mostly on how many notes your inputted “chords” have, so it feels better to have this setting separate.

There is also a “keep chord notes” toggle now, that can disable the chord notes in the output in case you wanted to avoid duplicating notes in your harmony.

Instead of ordering the intervals over the knob’s range by intuition I made up a rule to get an order procedurally.

Reordered the panel to fit everything.

Overall I’m still not sure about this module: what it needs or if it is needed at all.

Here’s a self-playing patch to reflect on this feeling 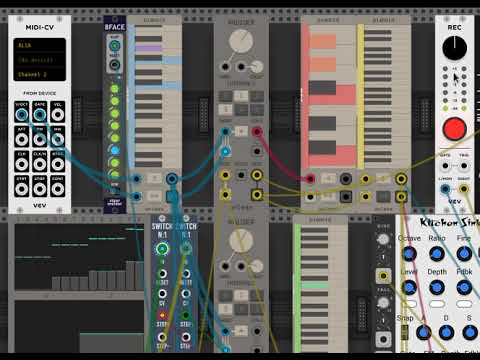