UI your opinion and advice appreciated

The custom slide switches I somehow managed to hack are not working in my efforts to bring some new modules along with the old alto777_LFSR group to version 2. Yeah, they comin’.

For versions 1x and earlier, I had implemented three-position slide switches that work by dragging rather than clicking. It felt to me more like operating a slide switch.

So I am stuck in the 20th century - I just didn’t like having to go through HIGH on my way from MED to LOW.

Dragging means I can drag the slider up OR down.


My question is not why they don’t work (yet!), but whether I should even try to get them working again.

An alternative would be to make slide switches that detect where in the device the click was, so we could make the switch go up or down, not just one direction. Again a new UI element.

Just now I notice that when I reload a working patch that included my new modules Rack V2 immediately crashes. So I won’t be busy on this UI thing for awhile, but I remain curious about what you all think I should do about the 3-way.

Yes, that design for 3 way switches has bugged me. It works fine for binary values. But three is potentially a problem for performance scenarios.

Instead of a slider, why not use some type of radio button? Then you can instantly select whichever option you want, regardless how many options there are.

Maybe it could still be rendered as a slider, but the labels could be the actual buttons?

You can use an SvgSlider and set snap = true to create a switch with more that 2 stages.

Be careful doing this; I implemented drag behaviour for my switches some time ago and it was not received well due to it being different to how slide/toggle switches behave across the rest of the modules. Andrew urged me to not persist with it.

I do agree that dragging to move the slide/toggle to the correct position is much more natural.

Well right now I feel lucky that I got the old switches back.

I may have to figure out what went wrong with my hack but I will not let it be what holds up the works.

Thanks on the other ideas. I like radio buttons. I did use the SvgSlider in my slide switch object. I have very longer multi-position switches on the Amuse module, that was where it needed to work and somehow still does (40 position switch). I figured I could make a little 3-way using the same logic. And did. That’s what broke, the 3-way version.

I mark not persisting as the soultion. 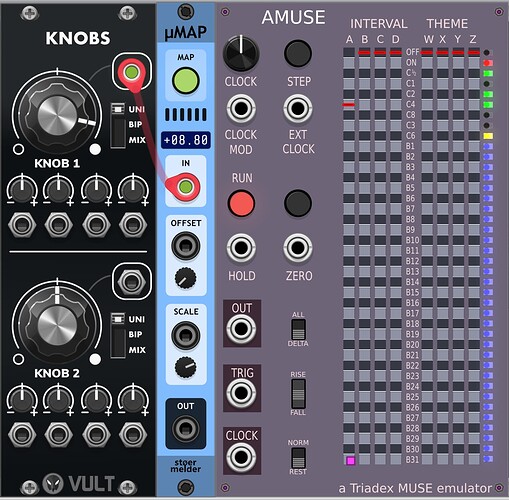 Attn Developers: Please don’t get too fancy with your controls - some of us like to use OSCelot / cvOSCcv/ MIDI-MAP / uMAP etc. to control your modules.

Something I discovered recently: In Rack v2, right-clicking a switch displays a menu with all of the switch labels. You can select the position you want instead of stepping through them.

In Rack v2, right-clicking a switch displays a menu with all of the switch labels

Maybe only in ones that do it “right”? I tried some of my old modules and they didn’t do this.

I think you need to use configSwitch(…) instead of configParam(…) for the switch options to show up in the context menu.

Uh oh! Only because I played by the rules? Anyway, I agree the 40 position sliders are not very usable compared to 6 knobs with some kind of alphanumeric display of which stop you are at.

But I was going for a copy of how the original Triadex was operated. I did a similar standalone in hardware with a microprocessor and tots punted on “verisimilitude”, did it with one rotary encoder and an LCD screen.

Any of these is way less fun than a real Triadex. My moms really should have sprung for the mere $300 it cost in 1972.

I think you need to use configSwitch(…) instead of configParam(…)

My old modules seem to avail themselves of that method, still on configParam… although just now my brain is mush and I may be hallucinating.