Hi As I have no hardware controler at hand these days I use the Tact-1 module wich is a nice substitute. The return function is very nice, and of course I would like to control the speed, which the rate button does. The problem is that it doesn’t only influence the return but also the “going”. I mean when you manipulate with the mouse. It seems to be done like that, by design.

Thank for your ideas.

PS : I also use MAN. CV but it has no return functionality.

For Tact-1, this is indeed by design and I don’t think there is a workaround. In the Tact module (the bigger dual one), there is a way for the recall to either be gradual or not (according to the setting of the slide switch), but storing has to be done with a button press, and recall has to be done with a trigger CV, so that’s probably not what you are looking for, but perhaps it could help. 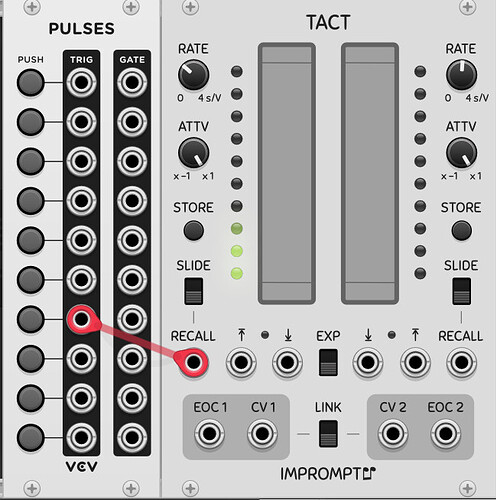 It helps in the sense that I hadn’t seen Tact as being a fade manager. However, it is not what I was looking for. But that’s not a big deal. It’s just that I’ve just discovered tact-1, which I’ve started to use as a pitch wheel, the return with a slight rate makes it very comfortable to use with the mouse. It was just an alternative until I get my controller back. Thank you for the feedback

But thinking about it, being able to manipulate the touch surface even quickly, and slowly letting the voltage return to its original state could still be a nice feature.