well, you know what they always say about backing up your computer… something off your computer is a good idea, whether it’s drive or dropbox or github…

I go a little overboard on backing up. every day I back up my main drive to a server in my house, and I back up my home folder to the clouds every day, too.

What services do you use? For a long time now, I want to have a backup online somewhere.

Another possibility to store/ have a backup of your patches is a github repository, you could use it just for the patches, you can even automate the backup

I’ve thought about using Patchstorage to keep a copy of any successful patch, but it’s a lot of bother. My home setup includes a RAID system which keeps a copy of everything. Each new save session goes into a separate folder so nothing is overwritten so I have a full history to go back to.

I’m a bit of a cloud skeptic from the market politics involved, but I have a bit of an RAIC setup. Things get rsynced across several computers on a regular basis. Really important (work for others) things go to off-line media, and maybe bank vaults. If a customer wants stuff in the cloud, I have no trouble, but I trust redundant storage more than I trust the players in cloud space, and if my setup burns down, I have far bigger problems than missing data. My music directory gets synced across eleven computers (I’ve been at this a while, and old boxes have next to no resale value) sitting on a GigE net, and many of them spend a lot of their life suspended.

I’ve used Backblaze.com for years and had no problems. Not endorsing them. Just saying. As Rack patch files are so small I don’t delete anything. 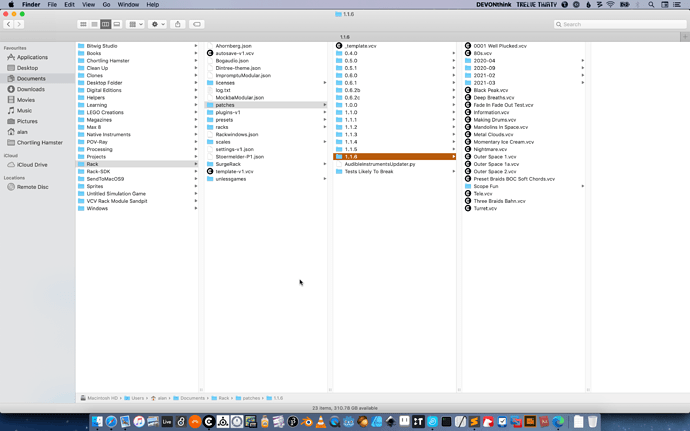 What services do you use?

I don’t recommend my crazy solution. I use Acronis True image both to image my computers to the server and to backup into their cloud. I only use this system because a) I’ve been using it a long time and I’m lazy, and b) I really want to have an daily image if my boot drives so I can bring my windows machines back online very quickly if one of them refuses to boot.

That’s what I would do, but then again I’m already a git addict. I don’t think normal people like it as much. Probably only worth the trouble if you care about versioning and history?

I sync my patches to an iCloud folder.

good to see all the replies. thanks.

like @caowasteland im also weary of cloud services thats why i was curious what others were doing. that being said i have seen Backblaze recommended before on the Reaper Blog channel on youtube.

a cloud service would be pretty convenient for backing up patches.

Not only do I not back my patches up, I delete my patch directory weekly unless I’m still tweaking something. It’s easy to fall in love with the concept of going back to old patches/music in general, but the value of generative synthesis (for me, at least) is in the immediate process, and I don’t get that rush stepping back in to finished patches.

If I want to recreate something in the future, I’d generally have a better time just retracing my steps and creating an approximation with new techniques I’ve learned since the last time I patched stuff up. The calculus might change if I was commercially releasing something and obligated to be able to exactly recreate it, though.