OK @stoermelder how does Dirt work?

(If you don’t know, it’s a module that simulates analog mixer channel crosstalk)

Maybe ‘normal setup’ is pushing since I have a not-yet-release V2 RackWindows. But I’m wondering where the Dirt module would go. Maybe right before the RackWindows Console MM which replaces the summing bus for MixMaster?

And given that MixMaster has 24 channels (effectively) could there be a DIRT MM module that works on all the Mixmaster Channels, the way Rackwindows Console does?

EDIT: LOL I stuck 3 Dirts on the 1-8, 9-16, and GRP/AUX outputs, before the Console MM and the result is steady white noise at -48dBFS. Maybe the noise should be turned down, or put on a control. 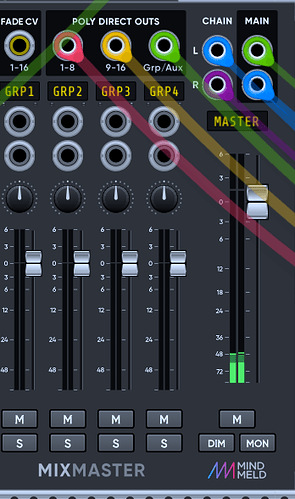 Also, Dirt could use a true bypass.

I had the idea of simulating Crosstalk within polyphonic cables and adding some other „problems“ with wiring found in real life, like hum or noise.
The module is only a very basic implementation, far from anything I’d call useable…

If you want fine control of crosstalk, you could use a Submarine LT-116 which is a 16x16 transformation matrix.

I looked at the implementation and it’s solid. The only complaint is the noise builds up when you use more than one. Aside from that, the crosstalk implementaiton looks OK. A noise floor knob would be good so you could trim it.

The implementation should be

A) Takes at lease 3 poly inputs and produces 3 outputs. B) compute crosstalk on all 24 channels C) Has an adjustable noise floor D) Bonus if it has a crosstalk level knob.

I see that it’s a pretty straightforward bit of code. I don’t think it needs to be complicated if it does something interesting that sounds good.

Anyway I think it’s a good idea that’s worth finishing!