When we announced the new update to Seq++ we forgot to highlight some of the cool features. To the extent that current users didn’t even notice these new options after the update.

The newest features all come under the heading of “xforms”. They do offline/permanent processing of the selected notes in your sequence.

Most of them have an option to be “scale aware” so that notes starting out “in key” remain there. This opens up creative tricks. Even the lowly transpose is more interesting – for example, in the key of E minor, transposing a B minor chord up by a step will give a C major chord!

Invert is the old staple that flips the pitches top for bottom, but again the ability to stay in a scale expands to possibilities out of the 12 tone row style.

Reverse pitch reverses the order of all the selected pitches, while keeping the start time and duration unchanged.

Both invert and reverse pitch can easily make nice melodic variations without messing up the rhythm.

Chop notes can do all sorts of things, primarily “ratcheting”, generating triplets, trills, and arpeggios.

Make triads lets you specify the root notes, and it builds up the scale appropriate triads. Some modes will generate chords in all the standard inversions.

The example in the screen capture is the result of using “make triads” on the sequence C, D, E. Key set to C major, and inversion set to first inversion. Note that the C is a major chord, and the D and E are minor, as you would expect. 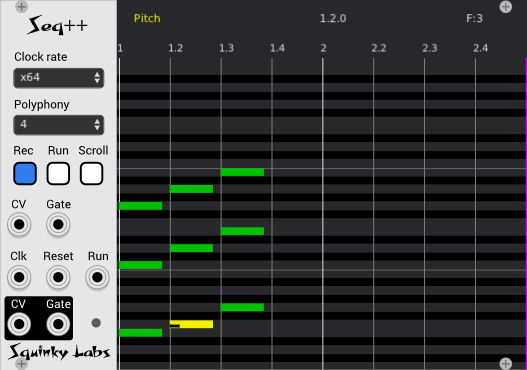 people who can sight read a note grid might point out that this is not the expected voicing of a first inversion chord - that fifth is really an octave too high. It’s a minor bug, will be fixed.