Just wanted to let you know about Proteus, a new generative sequencer in the Library. The philosophy behind Proteus (the shapeshifting sea-god), is to allow you to generate melodies and explore the boundaries between repetition and change.

What Proteus does is to generate a melody, then repeat that melody until it gets bored, at which point it will create a brand new melody. How does it decide when it gets bored? There is an internal cumulative probability distribution, so Proteus is pretty much guaranteed to repeat your melody a few times, but as it approaches the number of repetitions set by lambda (controllable by knob or CV) the probability of a new melody will rapidly increase.

Proteus’s melodies are not just random notes: it chooses carefully from a scale with weighted probabilities, and it favors repeating notes and adjacent notes, so that its melodies are more musical than random notes.

Control the density of notes, the length of the sequence, the scale, the probability of octave transpositions and note mutations with the knobs or with CV, and lock in a melody if you really like it using the switches. 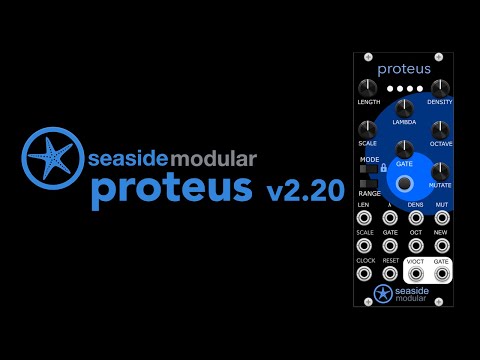 Congrats and thanks for the cool module!

If I can sneak in a small suggestion/request: would it be possible to make it such that when we have locked it to a sequence we like, the sequence gets saved/reloaded when we close/reopen the patch?

Cool, I’m playing with it. Is it always in the key of C?

In there a way to do a reset on the module so it can by synced with other modules?

Yes that’s a great idea, thanks!

Very nice! I appreciate that you provided a lengthy and informative video to explain the module. That’s a huge plus to quickly get up to speed. I’m looking forward to taking Proteus for a spin.

Saw the Youtube movie , at one point I started shouting “Lock Cursor While Dragging”, it prevents the constant moving of the screen 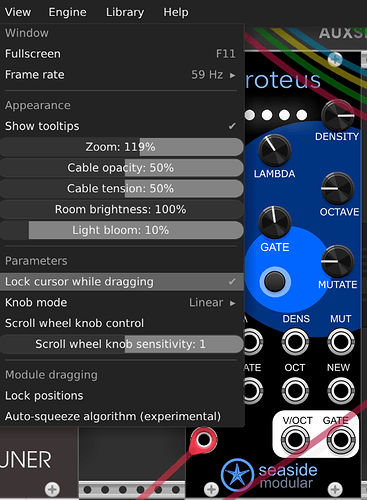 Will look into adding that

Most, but not all sequencers in VCV Rack include a RESET input so multiple sequencers can sync.

Oh man, thank you so much. lol

looks great! Eager to try it out! Thanks so much for building this thing!

I really like it. I have it accompanying my Meander module which is generating a harmonic progression in C major with a bassline and Proteus playing an evolving scale sequence with mutations. Works pretty well, even though I have not found a way to sync it to Meander other that to a common clock.

Good job, both on the hardware and the VCV module.

Looks cool. I’m eager to mess with it! I wonder about quantization. Should “none” be an option? There’s a ton of other scales, like the presets in the VCV quantizers. I don’t know how tied your algorithm is to the 12 tone scale.

We can add scales that have microtones (and I do intend to, I have a background in North Indian Classical music), so it’s not tied to a 12 tone scale really – but I think it does need to have some quantization to function.

Then chromatic would be good to add, at a minimum.

i’m not sure if i’m doing something wrong, or what, but once i connect a clock to the clock input, the gate output goes high and stays high, outputting a constant 10V. is this expected?

EDIT: i tried adjusting the gate length parameter but it didn’t make any difference.

No, it shouldn’t do that. There may be a bug in calculating the time between triggers if it is left idle for a while (working on this one). But try disconnecting the cables and then re-connecting them.

no such luck, unfortunately. once a clock input is connected, the gate goes high and stays that way until i delete the module and add a new one.

EDIT: nevermind, it’s suddenly working now. i have no idea what was wrong before, but it’s working as expected now.

This is your topic and I certainly do not want to hijack it. I get excited when I find a module that is similar to my Meander module, I always like to explore the other modules and see what I can learn in the process, If you also like doing so, you might want to take a look at Meander.

Meander has a long 34 year history with the original for Windows around 1992 having a lot more things similar to your Proteus. That Meander had a “mini sequencer” that allowed semi-fixed sequences to be defined, as well as a drum machine. It also had about 39 scales but I removed all but the mode scales for VCV Rack as Meander for Rack is harmony driven and it is next to impossible to form nice chords from many scales. Even with much of the original functionality removed, Meander for Rack is made up of about 12,000 lines of code. But it actually is not a CPU hog since it is a sequencer and does very little DSP per sample calculations.

But, that old Windows version still works fine and I launch if fairly often to look at how I did things way back when.

I look forward to see what all I can do with Proteus.

Here are some suggestions that would make it even more musically useful to me:

Very enjoyable module though, thanks!