Hello, I’m trying to find information on how to quickly place notes on a quantizer’s keys to get a desired scale. Some of the quantizer don’t have the scales pre-entered and it makes it tricky for someone like me who isn’t music trained. I tried to search online but with no luck. Having some sort of reference would be super practical. thanks!

Yes I am there and see it but I’m ready to handle tomatoes thrown at me here… but this isn’t helpful for me on how to translate that to a scale in modular terms. I tried and yet failed. If that happens to me, I think it happens to others too.

My request would be to find a page where I’d find a scale and then an image next to it on how to program it.

In the right click menu under preset there are several choices. Click on one and the module panel will show your choice, which you can then adjust, if you like, by clicking on the lights.

The VCV Fundamental Quantizer has a very good list of built-in scales as presets. Most Quantizers look like a Piano, but tilted by 90° - so if you find a scale with an image of piano keys you could easily copy that over to most quantizers.

Have a look here: Musical Scale Info: C dorian - if you scroll down, there is a picture of the piano keyboard.

Edit: And then start to learn basic music theory. That is important knowledge, even when reddit will tell you the opposite.

This shows the names of the notes on the musical keyboard:

A musical keyboard is the set of adjacent depressible levers or keys on a musical instrument. Keyboards typically contain keys for playing the twelve notes of the Western musical scale, with a combination of larger, longer keys and smaller, shorter keys that repeats at the interval of an octave. Depressing a key on the keyboard makes the instrument produce sounds—either by mechanically striking a string or tine (acoustic and electric piano, clavichord), plucking a string (harpsichord), causing ai...

And then as Markus said, most quantizers have the keyboard turned vertically rather than horizontally. Some quantizers are difficult to distinguish the white keys from the black keys, but they are there,

In my opinion, the ML Modules Quantum quantizer is one of the easiest to use and easiest to see the keyboard white keys and black keys.

I don’t really understand - if the reference says the notes in the scale (e, f sharp, g, etc…) that isn’t good enough, it must be a picture of a particular module?

Hello, You might also enjoy using JW’s quantizer. You don’t need to know anything beyond which root you want (C, D, Eb, etc) and which type of scale you want (major, minor, dorian, etc). I often teach the scale types as having different flavors. JW has included enough to cover quite a few different musical flavors, IMO. The octave knob will make the pitches higher or lower but will remain in the same key.

JW’s sequencers also have similar built-in quantizers that don’t require knowledge of notes on a piano or notes in a scale.

Additionally, musictheory.net is a great tool for learning musical concepts on your own. Here’s a page with a scale calculator. You’ll probably want to change the display to a piano keyboard with the box on the left. Once you have that set up, you can just punch in the scale you want using the controls on the bottom and the red dots on the keys tell you which notes are in that scale. 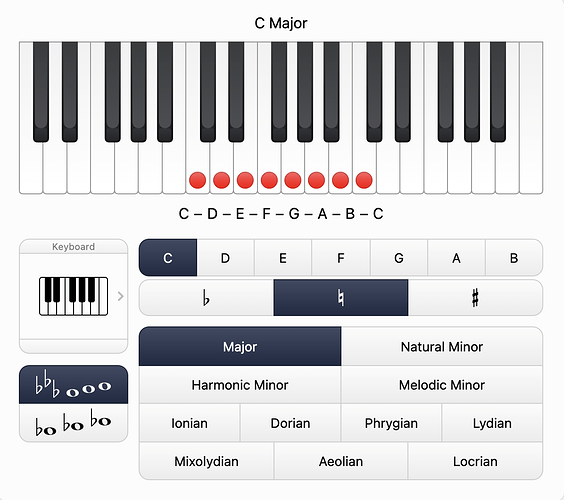 I don’t really understand - if the reference says the notes in the scale (e, f sharp, g, etc…) that isn’t good enough, it must be a picture of a particular module?

Haha. As an analyst, I come accross this all the time. What is perfect/obvious to one is useless/confusing to another.

This is a list of the fundamental frequencies in hertz (cycles per second) of the keys of a modern 88-key standard or 108-key extended piano in twelve-tone equal temperament, with the 49th key, the fifth A (called A4), tuned to 440 Hz (referred to as A440). Since every octave is made of twelve steps and since a jump of one octave doubles the frequency (for example, the fifth A is 440 Hz and the sixth A is 880 Hz), each successive pitch is derived by multiplying (ascending) or dividing (des This ...

Here’s some presets (Scales not chords) I did for Quantum - it’s easy to make your own presets and save them.

These are for Quantum but you could do the same for other modules, just change where you save them.

this is what I wanted

Yeah I use the JW Quantizer when I feel lazy. I just wanted some online reference.

I think my request wasn’t precise enough so I take the blame with no shame. But kudos to @GrayCatMusic who gave me exactly what I wanted.

You can definitely learn music theory, especially with a handy website like musictheory.net. It’s just a bunch of numbers. I mention this because some people think it’s some arcane discipline, but it’s just arithmetic like everything else around here, so in case you find it intimidating: don’t

But kudos to @GrayCatMusic who gave me exactly what I wanted.

Here’s some presets I did for Quantum

I should have mentioned that these are scales, not chords.