Rack Pro in Reaper No Audio out of VST

Hoping someone out there using Reaper might have had this problem and found a fix.

I’ve been using Rack Pro in Reaper for a while with great success and not many issues, however up until now I’ve been using the VSTi. Today I started using the VST in my FX chain with very simple setups (just passing audio into a filter or reverb and back out), but no matter what I do I can’t get audio back out and into either the next item in the FX chain, or back into the track (if it’s the last item). I can clearly see the audio is coming in and reaching the output jacks (the LEDs on the Audio module are lighting up, and if I close the filter down they drop and disappear), but nothing comes out of VCV. If I remove Reaper, I get audio coming back to the track. Other effects work without an issues.

could you take a screenshot of a patch with the fx? also, are you using Audio-2 or 16? If the latter by default you will only hear audio from vcv outputs 1 and 2. In Reaper to access audio on the other rack outputs you need to add tracks to the “plug-in pin connector” and route the audio in the track. 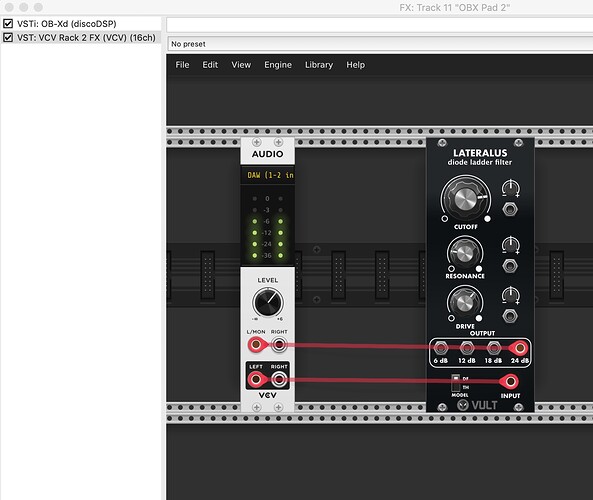 I’ve tried routing the audio signal to a different track, but that’s a dead end. Definitely seems like there is nothing being output by the VST. I’d expect to be able to put another VST after it in the chain and see/hear the output of VCV.

I don’t know why I didn’t try this before. I switched from AUDIO to AUDIO 8 and that works. So seems it might be a bug with AUDIO. Can’t see any reason why the 8-channel would work when the 2-channel doesn’t. Especially given the pin connector config is identical.

strange. Nothing leaps out in your Audio-2 screenshot that shows anything obviously set up incorrectly. But, glad you found a way to get it working using Audio-8 instead. FTR I always use Audio-16 in my Reaper templates and that seems to work well too.

I only mentioned the plug in pin connector in case you were using say Audio-8 or 16 and outputs going into anything except 1 and 2, but obviously wasn’t the case for you.

Yeah. It’s a strange one. Hard to see anything I could have done to mess up the routing. I tried the same setup in a fresh project and hit exactly the same issue, so unless it’s something in my default template, I’m pretty sure it’s bugged. Thanks for your suggestions. With this working, I’m in heaven. The combination of VCV and Reaper is what I always dreamed about when I used to use Reason.