I like the Wav Bank MC but I’m not sure I use it correctly. @clone45, is the polyphony meant to work only with multi-channel files?

So common polyphony like the one below is not implemented, is it? 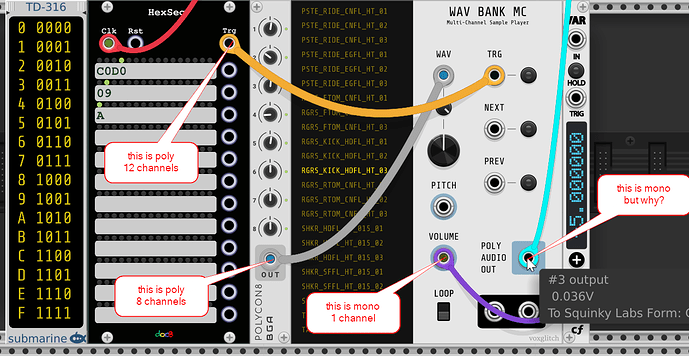 Ah, yes, I think that you might be misunderstanding it, which I completely understand.

is the polyphony meant to work only with multi-channel files?

“polyphony” in this case is a bit misleading. This module is more bizarre than it first sounds because I collaborated with a user who needed something very specific.

Let me see if I can explain…

The sample highlighted in your screenshot, RGRS_KICK_HDFL_HT_03.WAV, is probably a monophonic .wav file. If it were stereo, you’d be seeing two channels at the poly audio out. But .wav files aren’t restricted to just two channels. .wav files can have up to 16 channels! Why would you ever need this? Surround sound, for example, needs 6 channels.

For most humans, the poly audio output isn’t very useful. That’s why I added the left/right output as well for convenience.

I suspect the misconception is that Wav Bank MC might allow you to play multiple .wav files at once. This isn’t the case. You’re still limited to playing 1 sample at a time. Maybe eventually I’ll evolve Sampler X8 to support 16 sample playback using poly triggers, pitch, position, and pan CV controls.

I hope that explains it?

Thank you Bret for the clarification!

Yes I got it now!