Hi all, First post for me! I’ve only recently got into VCV Rack so just getting started. I know there’s many quantise modules out there, but I’m having some trouble replicating a patch I’ve seen on Youtube whereby a white noise (from MI Kinks) is played via Intelligel uScale to MI Rings. It sounds quite musical on the video but I don’t think there’s a VCV module that emulates uScale in this way. The ones I’ve tried just sound very noisy and scratchy, and don’t appear to be able to save custom scales as far as I know. Happy to be corrected! Any thoughts appreciated… J 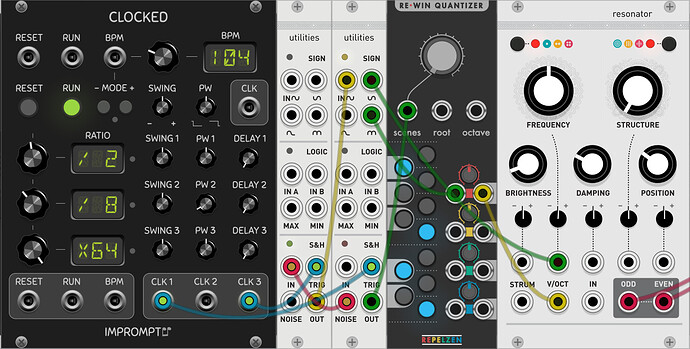 If you S&H the noise with a fast clock (x64) it sounds similar, I think the sample rate of the input of a quantizer in VCV is much faster than that of uScale.

Every Quantizer can be made into a random chord generator via stoermelder 8FACE - but one with 16 built in CV-Controlable scales is Re-Win from Repelzen.

Sounds nice actually, thanks for the video and the idea.

Aye that’s done it Mo, nice one thank you sir! Nailed it with the Re-win recommendation, I also added a couple of VCAs for finer control over the scale selection and “notes”. Thanks again!