I just finally got around to trying this module and what a gem! I can’t believe it took me this long to discover it, it will certainly be in many of my future patches.

So, soon there will be 6 additional progression presets available, numbered 60-65. The progression length can be varied from the default 7 down to 1, so the number of variations is 6x7=42.

This song is a cyclic 5ths progression that goes around the circle once per 7 steps.

Cyclic progressions have a different feeling than most traditional variations of I-IV-V chords. There is less of a feeling of progression from tension to resolution. The progression is going somewhere, but really just going in circles. The resolution comes when the progression gets back to its starting point after 7 steps. It should be ideal for ambient foundations. 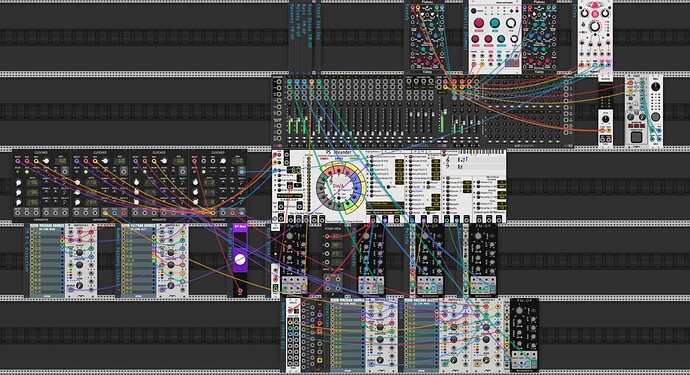 Here is my latest music, “Ambient Journey”. This goes back to my late 80s’ roots with minimalist ambient generative 30 minutes of relaxation music.

This piece in in B-min and stays on the “I” chord, which is Bm in this case. The Bm chord goes through evolution via inversions and a small amount of fractal Brownian motion (fBm) drift in the octaves. The melody also goes through very slow and small fBm octave drift. Since the bass follows the chords, the bass also slightly drifts. The Meander 3-note chords are converted to 4-note chords with the root doubled in octaves. The 4 chord notes are arpeggiated via Count Module 8-1 sequential switch, which is in turn sequenced by other sequencers for direction changes. OCT is also sequenced. All sequencing is done on nice clock boundaries by the several clock frequencies. Two Meanders are used so both the Bmin heptatonic and pentatonic scales can be output and sent to Grande Quants. Clock signals switch the Quants between the two scales. Several parameters in Meander are clock sequenced.

Thanks to David Grande’s suggestion, this patch makes use of his Tails module to turn mono notes and gate into poly notes and gates so sequential notes can continue to follow their own envelope, independent of each other. This is a nice, simple technique that really helps Meander melody and bass sound better and more natural.

Here is the patch if you would like to play with it: Ambient Journey.vcv (10.5 KB)

As usual, click on the master reset button to sync all sequencers. 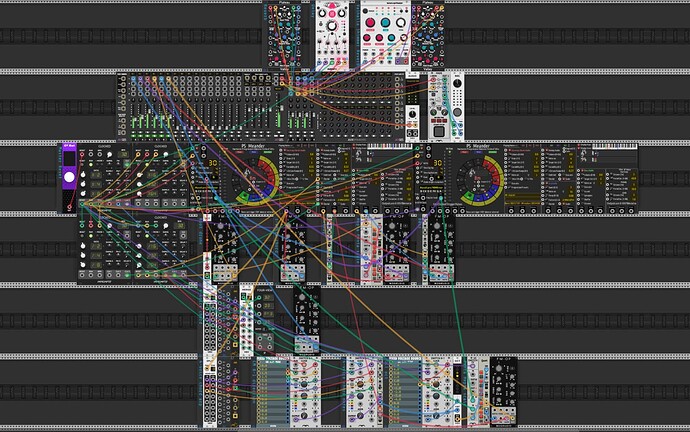 That is lovely. My brain insists on playing a military snare over the top of it, but I think that’s my problem rather than yours.

My brain insists on playing a military snare over the top of it, but I think that’s my problem rather than yours.

Interestingly enough, I had drums including snare in the patch but took them out since they are VCV paid modules. I thought the drums sounded good, but kept asking myself “Really… drums in ambient?”.

Purr Software Meander V2.0.23 has been submitted for library review and build.

There are only two changes in this release: