Frozen Wasteland PROBABLY NOTe coupled with PN-CHORD from a V1 patch does not work properly when opened in V2. All the scales show all notes as red, and the PN-CHORD creates 4 channels of output, but all have the same V/Oct value.

The attached image and patch shows the problem. The top PN was from the original patch from V1 that was opened in V2. The bottom PN was added while running V2. 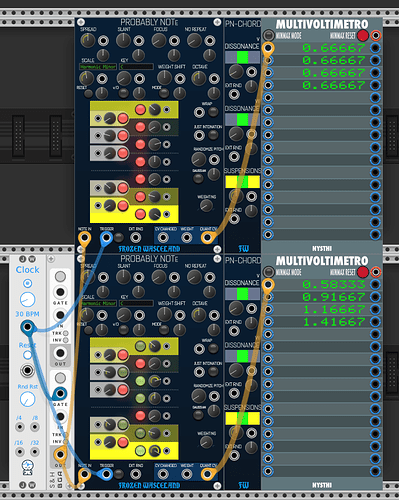 If notes are manually clicked to make them green, then all works as it should. But that has to be done for each scale.

The patch can be fixed by deleting the PN module and replacing it with a new one while running V2.

I opened a bug report on Git Hub, but without a patch, and before I fully understood the issue. It was closed. I will post a response to the closure, and hopefully it will be reopened.

But the bug is pretty easy to work around, so it is not a show stopper.

Best to log this on his github as a V2 issue, here is not the place most devs look for what issues are found… Issues · almostEric/FrozenWasteland · GitHub

Did you actually read my post? As I said, I did open an issue on the matter but it was closed because Eric could not reproduce it. I have added a responding comment to the closure. PN-CHORD not working in V2 · Issue #101 · almostEric/FrozenWasteland · GitHub

I don’t think I have the privilege to reopen the issue, and it doesn’t feel right to open a new one.

I posted here because I found a simple work around, and wanted to share in case anyone else runs into the same problem.

woops, missed that! Should not post when in a rush

The new issue comment should still trigger a notice to him, so hopefully he will get that sorted… and thanks for the workaround…