Prism: Rainbow - a port of the 4ms Spectral Multiband Resonator to VCV

Just want to say that the new 1.10 update the new GUI looks terrific. I’m finally going to try to figure this thing out now.

Wow, this new version is amazing, looks just as good as it sounds. Thank you so much John & Pyer !!

What a treat, I’m sure I’ll spend many a happy hours experimenting. Thank you both for an amazing module

Just a quick update on what’s going on:

RIght now in GitHub, on the master branch:

The adventurous are encouraged to take a look - I can provide windows binaries if there is interest.

Hey John, and thanks for the update! It really has nice improvements sometimes but I found some audible changes in the one of the mode between 96 and 48 khz. Just check this patch please. prism new test.vcv (15.8 KB)
The change will be noticed on the higher harmonic

Mentioned on FB about the faders taking away from the beautiful design a little, so here’s some tweaks, PR’d. 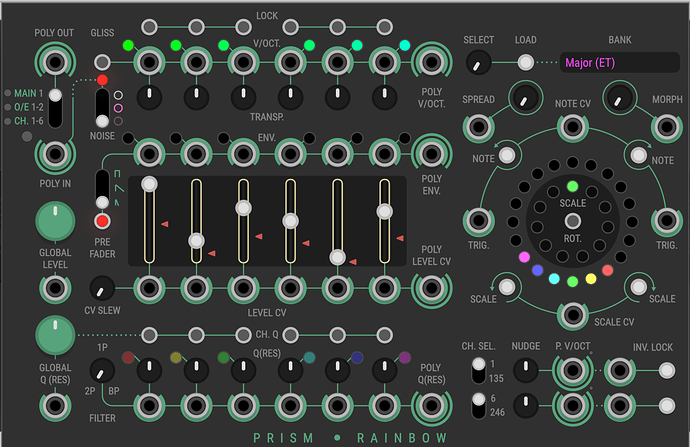 Yes, you’re right. At higher frequencies the filter frequency drifts quite a lot.

So that’s not great, but the drift seems to be smoothly varying so I think it would be possible to calibrate it out.

At lower frequencies there does not seem to be problem.

The 48Khz mode does appear to be slightly quieter.

Thanks for the contribution! I’ve seen the PR on GitHub. I’ll pass this on to Pyer.

Any conflicts with the PR?

No, but we won’t merge the PR as we’re not using Git to manage updates to the files.

They’re small changes to the fader/handle struct and panel. The only big change is the fader .svg I can pm that if you want to use it, it’s yours!

I’ve only tried it very quickly and it seemed to be extremely hungry in terms of resources, on my old Linux system. I haven’t tried changing any default settings.

Any chance for a port of the Spherical Wavetable Navigator? I almost bought one but saw that it doesn’t have individual outputs. Would love to see it in VCV Rack with 6 outputs!

What do you use?