That looks very sensible to me. Excellent slight-but-comfortable abuse of portable sequences.

Portable sequences have been implemented exactly as proposed above in QQQQ, coming soon to the library.

Portable sequences have been implemented exactly as proposed above in QQQQ

This is great. nice work!

Forgot to post here, but here’s a third module family of mine that implements Portable Sequences, and somehow, it implements them as you’d expect rather than being a weird take on the standard. 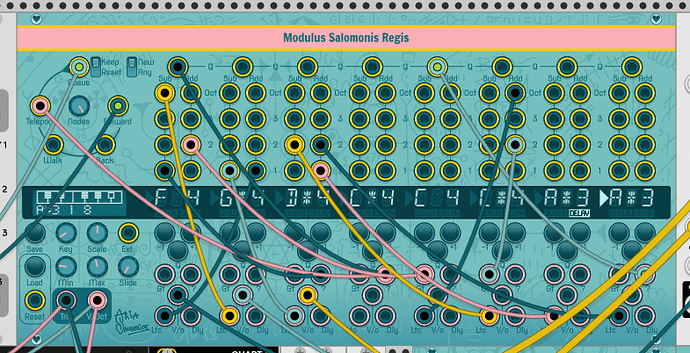 Excellent! I’ve added a mention to the Entrian Sequencers manual where I list the other sequencers that support the standard. I’ve used the phrase “the Salomonis Regis series from Aria Salvatrice” - is that OK? I’m happy to change it to the wording of your choice, and/or to link to your website / manual / VCV library section…?

Anything works! There’s already 5 modules of mine that support it, so you might want to just say “Most of Aria Salvatrice’s collection” unless you wanna update the docs thrice a year haha. If you want to link to something, https://aria.dog/modules/ is the canonical URL.

Are there currently any trigger / drum sequencers implementing this standard?

I am currently developing a trigger sequencer, and was looking at using this standard, The documentation seems simple to implement, however each track has no clear definition of pitch. While I could simply assign arbitrary values, possibly the corresponding v/oct for the standard midi drum mappings, I would prefer to use the same values as used by others.

I have been looking at the clipboard data from Entrian Drummer from the “Acoustic Drums” module, but this appears not to follow the format shown in the OP, or described in Squinky Labs document. I am new to Entrian Drummer, with only 15 min use I may have missed how to copy portable sequence data.

@Richie will show up soon enough, but I believe that not all Entrian sequencers use that yet, and since drums is one of the older ones… I believe he did implement this on some non-pitches sequencers, but I’m vague on the details

It think using arbitrary values would be ok in your instance - you could still copy rhythms around. If you paste a rhythm, all at middle C, it’s pretty easy to move the pitches around in Seq++, and presumably other sequencers. Most of the Impromptu sequencers implement it, although they tend to have the oposite issue - they have pitches but no programmed rhythm.

@Aria_Salvatrice has done some very clever mappings to those sequencers and I think even quantizers?

One representation that might make sense for drums in portable sequences could be to use notes from the GM drum map?

@Aria_Salvatrice has done some very clever mappings to those sequencers and I think even quantizers?

But it seems nobody has realized how to use it yet, haha.

The Entrian Sequencers don’t support Portable Sequences for drum tracks, because we never created a spec for it.

The problem is how to differentiate drum instruments. A drum sequencer in Rack doesn’t necessarily know what drum instrument any given note is triggering. In fact I’m not aware of one that does, except for the very special case of Entrian Drummer having imported a MIDI drum track (not even a released feature yet).

So you end up just having notes on channel 1, channel 2, etc. with no indication of which instrument they’re playing. That’s not terrible, it just means that you have to wire up your trigger outputs the same way as wherever you were pasting from.

That’s a very related question to how to support drum grooves: the answer might be that multiple drum instruments are represented as multiple tracks. I wouldn’t want to come up with a spec for one of those ideas without also spec’ing the other, because they overlap so much.

That was the point at which we said “Designing specs is hard; let’s release what we have.”

Thanks for all the replies, @Richie you replied while I was typing my response, and have covered what I was thinking, but expressed much better.

I think, for now, I shall start by implementing “Single-drum-instrument Portable Sequences:”, as the spec for such is already clearly defined. For now, I shall simply use a pitch of 0.0. If in due course the standard is extended I shall update to follow suit.

I did consider treating the tracks as GM midi, but as already stated above there is no standard layout from numbered tracks to drum voices, and tracks may not be used as drum triggers but for other purposes. This could lead to additional confusion, and I would be guilty of my pet hate of implementing a non-standard, standard.