Pitch, Gate & Velocity Over A Polyphonic Cable to VCV Host?

What is it that indicates to the Host that a gate, a pitch cv and a velocity cv belong to the same note? Is it just the fact that they arrive simultaneously?

How would one generate polyphonic notes? Use one polyphonic cable of gates to the gate input, another one with cv pitches to the pitch input and one with velocities to the velocity input? If so, is it that a given triple of gate, pitch and velocity get bundled into a given midi note because they arrive exactly simultaneously?

Why don’t you play around with the default patch (which is polyphonic), and see how it works?

Squinky is right, for Rack in general and for VCV Host specifically. Where you have a source of notes, for example MIDI-CV, it produces the pitch, gate, etc. for a particular note on the same channel on each of the cables. Take this simple patch: 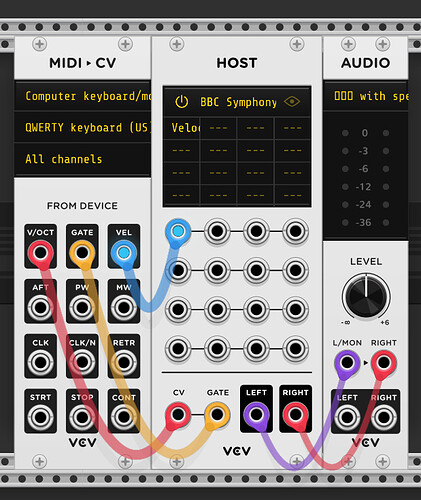 Thanks guys. When you say “channel” it’s not a midi channel, correct? It’s an index in the array of values sent on the poly cable?

And to send poly notes to VCV Host, each note having its own gate, pitch and velocity you’d need a poly merge for each of them?

Are there any other modules to make this easier?

This for sequential mono notes to a polyphonic VST in host

Thanks. I’ll try the Grande modules and try using a poly merge to add velocity control.

My goal is to play a piano module in Host as expressively as possible controlled by random / sequenced pitches, gates and velocities in rack.