Pets (and their reactions to wiggles)

My cat seems to hate noises from watching others’ wiggles (either on stream or YouTube, but not my own, because my laptop doesn’t stream through the home theatre).

She doesn’t caterwaul or anything, but she basically runs away.

The cats don’t seem to mind my hideous noises. They were not fans of my son’s clarinet playing, however. My wife can’t stand my noise, if that counts.

I used to take care of my neighbors cat while i was making my album, or just jamming in my room. The cat was always on my bed, and i noticed :

but i guess every cat has his own musical taste and personality, just like every person

So from what is understood about the hearing of cats for example, is that they have one of the largest frequency ranges in mammals 48Hz – 79000Hz. Being most sensitive in the range of 500Hz – 35000Hz. Human range being 20Hz – 20000Hz. And a cat can hear sound at a level far less than the quietest we can hear.

I understand some sound system speakers go over this 20000Hz up to around 35000Hz.

It is clear that even the noise of aluminium foil can distress a cat and is believed to have caused seizures in some cases.

From a personal observation my cat would often sit by the front door of my first floor flat in busy South London, some minutes before my girlfriend arrived. She lived 5 minutes walk away. There were no routine visits involved.

usually I don’t play loud when there are animals, I always suggest the owners to leave if there is a concert going on…

cats: some are curious, others are scared. some of them are neutral to anything. same for new human beings the meet

dogs: usually they don’t care, at least they are annoyed when frequencies are going too high, for sure they have strange feelings when listening to violin, cello ecc… they are a little bit annoyed as well when trying to replicate an earthquake with synths thru the subwoofer…but last time it was many years ago…

I think goats must be very curious…they are so nice and strange, we have two of them, but I have never played to them 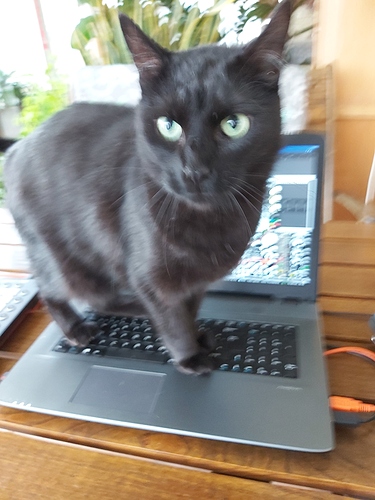 Wiggles might be a good name for a cat, actually.

“Wiggles! I know the modular is warm but you can’t sit THERE! And stop chewing my CABLES!”