We noticed the other day that we now have a lot of VCO module for VCV! And most of them are sort of “oddball” VCOs that aren’t really like other VCV modules. So here is a short blurb on each of them.

Most of them have a few things in common: octave/semi/fine tuning controls to make it easy to play in keys other than C. Extremely low CPU usage, very low aliasing, and no DC on the outputs. And they are all free.

Details are below this large image: 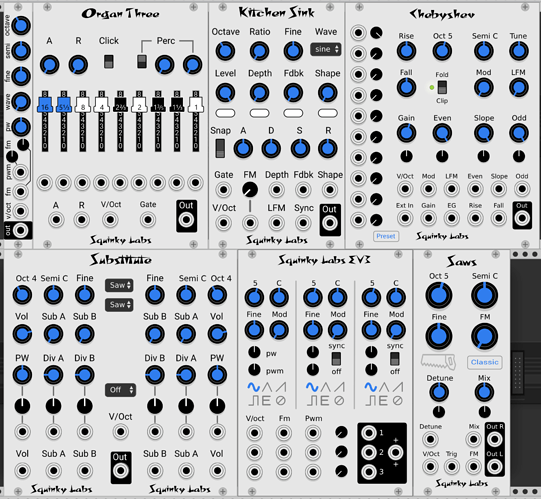 Chebyshev is a harmonic oscillator; you have CV control of each harmonic’s volume. But there are some cool things thrown in. There is a rise/fall lag generator on each harmonic input, so you can run clocks in there, but smooth out the edges. There is also a through zero linear FM input, so you can do FM and harmonics at the same time. People like to control the harmonic volumes with a lot of independent mod sources, so Caudal, 8FO, and our own Gray code are popular mod sources.

Basic VCO. Is what the name says. It outputs all of the standard waveforms, plus the rare “even” waveform. Waveforms are very, very, pure with almost no digital artifacts. Uses an astonishingly small amount of CPU, so feel free to put hundreds of them into a patch.

Kitchen Sink. FM VCO with a “kitchen sink” full of extra features. It starts with the features of the popular FMOP VCO, then adds oversampling for two or more operator FM with much less aliasing, dynamic wave-shaper, hard-sync, morphing output waveforms. Built in ADSR lets you use Kitchen Sink as a stand-along synth voice.

Substitute. A copy of the VCO section of the Subharmonicon. Each of two VCOs has two subharmonic outputs whose subdivision may be controlled by CV. Substitute is as far as we know the only VCV module that outputs sub-hamonics without a ton of aliasing. (But if there are others let us know so we can stop making false claims.)

Saws is a very close emulation of the Roland Super Saw from the old JP-8000. Also know as “the sound of trance. We kept as many features of the original as we could. Crucially we preserved the massive amount of high frequency aliasing, along with the same high-pass filter to removed alias products below the fundamental. But we added the ability to turn the aliasing off for smoother, less traditional sounds.

EV3. The EvenVCO used to be the most popular VCO in VCV, so of course we copied it and tried to improve it. We put three of them in one module, while using less CPU that one of the original. Implemented the sync feature, and removed the DC offset. Having three in one module makes it a natural for making chords. The build in normalled connections make it easy to use without a lot of patch cords.

Organ Three. Instant Hammond B-3 sounds. It’s not an emulation, so it doesn’t sound “exactly” like a real B-3, but it sounds good and the sound is instantly recognizable as “Hammond-like”. The 32 included ADSRs mean that you can use it as a stand-alone synth voice, but you can also use it more like a traditional VCO.

Thank you Squinky Labs so much for the amazing modules. I am a huge fan of your work!

oh, my, how could I have forgotten to mention Cheby! thanks for remembering. Yeah, I like that one. In a sense it’s not “unique” since there other harmonic VCOs, but it’s for sure not quite like the others. thanks.