I do not understand how do I deal with it. I push Bogaudio’s LMTR to just the output volume I need, vu-meters say I’m fine, I record and it’s clipping hard.

I’m used to my DAW, when the master vu-meter says -1db, it outputs -1db and exports nicely, but in VCV I can’t get it right, I have to lower the output volume.

Currently I’m trying to see how far I can go with only free VCV plugins in terms of mixing, mastering and overall audio quality, I’m a curious nerd.

With LMTR, it seems it is limiting without clipping but Stereo Recorder is clipping, so am I missing something ?

Yeah, but it ruins the point of master bus leveling if I output -7db instead of -1

I still don’t understand what exactly is happening, but this is a beginning. Maybe it has to do with Peak or RMS measurement ? I’ll look for a more in-depth vu-meter inside VCV.

Do some tests with constant level sine waves.

Okay, nevermind, I found the issue ! It was not the recorder, it was the Vu-meter.

Now I know, life will be easier, it’s driving me mad since yesterday 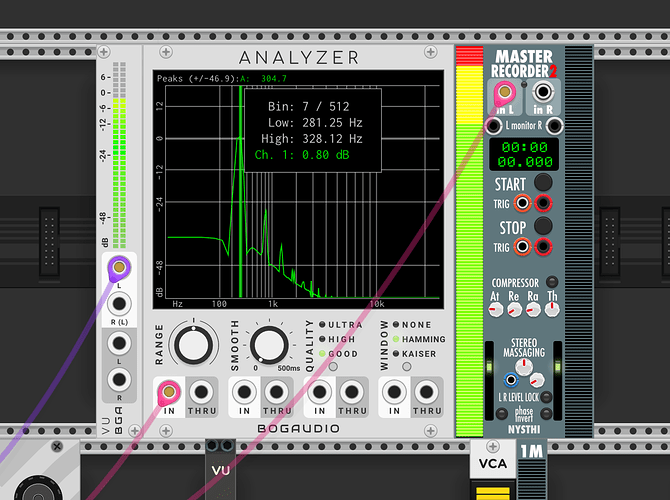 Yeah, problem solved, I just did that, thanks !

Edit : Found it, all good

I was about to say that “0 db” is maybe not a standard in VCV, but It seems I am wrong. Here is what the manual says: Absolute decibel measurements (e.g. for VU meters) should be relative to 10V amplitude. For example, a ±10V signal is 0 dB, and a ±5V signal is approximately -6 dB. You may alternatively use dBV for measurements relative to 1V amplitude."

btw, Squinky Labs Comp is a really nice compressor, imao. But the Bogaudio one is good, too.

Thanks for the info. So the volt is king, duly noted.

Yeah I’m already using your two comps in… mostly every patch. But for the limiting part I have to use something else than Squinky Labs * sad emoji *

oh, ok. Yeah, the limiter is for sure not the most sophisticated buss mastering limiter.

I meant; I had absolutely no idea it was a compressor/limiter

As long as it deals with incoming peaks, suits me, I’m not very sophisticated either

It is super aggressive about smashing incoming peaks.