Somehow, I have managed to record enough material with VCV Rack to dare to call my favorite parts of it an album. Most of these I already shared here, and a few of them started in the VCP challenge. All of it aleatoric, and played live.

I’ve come to call the genre I naturally end up making by accident “Baroque Technopop”, to ensure I have this market cornered. 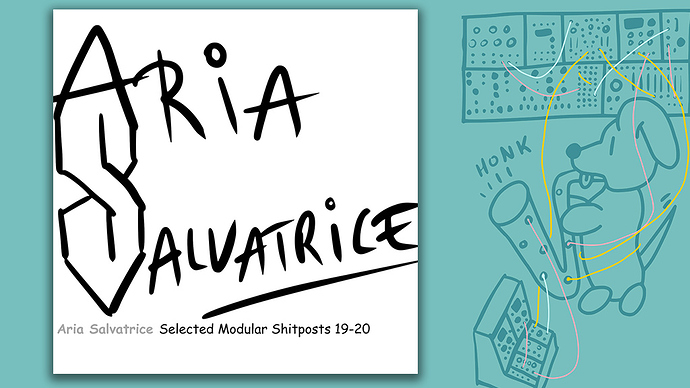 And here’s the album!!

And here’s the description of the album:

I used to think of modular synthesizers as an affectation for rich older tech boys, showing off five figures worth of rare boutique pokémons in videos where they’re more likely to talk about their modules than to actually use them to play their dad techno.

That’s until I saw VCV Rack used by people from my LGBBQT internet shitposting gang. It’s an open-source environment that emulates the eurorack form factor and workflow, without the part where it costs twice what my car is worth (and it’s not a bad car, it’s a pretty cool cabriolet, my dog likes to ride in the back). It’s free, why not give it a try, right?

Welp. A few months later, I’m developing my own modules for VCV. I guess I’m kind of a rarity in that I both make synth modules AND post songs. Normally people who make modules do not make songs, since they are too busy making modules to bother making songs. They just verify that their modules work as expected on an oscilloscope.

This album is a compilation of improvised jams I made along the way.

They’re heavy on the aleatoric processes: I have almost no control over the notes my system decides to play. Rhythms and melodies emerge from chaotic sources of randomness. You will hear a few attempts where I managed to tame and steer voltage as to resemble music. All those songs were played live, with little to no rehearsal, and were only minimally processed while assembling this album.

For every beautiful moment that made it, ten more were lost to the ephemeral nature of the modular system - there’s no going back to something you forgot to record. And twenty more were just horrific loud noises.

Most of those performances were committed to video: watch them on www.youtube.com/channel/UCGsTFMXm0NyA_V8_Q1kRhbQ/videos

Congrats on making an album. “Album” means accomplishment, right? So that’s a good thing. Just the feeling of completing and packaging something must be nice. I aim to try it, one day…

All it takes to make an album is the guts to dare to say “yup this here playlist of stuff i made, it’s an album” and upload it somewhere, once you decide to do that you will be so powerful cops will never be able to stop you.