My Eurorack journey has begun

He has a few good options in the rack - Disting has reverb and clockable delay, the Mimeophon is a delay and FX Aid has some good reverbs and delay too.

It’s a very well thought out rig - only surprise is no Clouds/Typhoon/Monsson ?

Thank you Marc! I have lots of options in the eurorack and then even more in VCV rack. In the euro, there’s both delay and reverb in both the FX AID, the Mimeophon and the Disting. More effects on top of that with the Disting and a ton more with the FX AID, which is an open platform. So plenty of effects to go around. I will probably mostly use effects in VCV Rack for voices made in VCV Rack, but we’ll see. The world is my oyster, or so it feels like

Thank you Steve! Yeah, I put a lot of thought and work into it. A Typhoon was very close to going in, and was there in an earlier planning phase. But between that and Mimeophon/Morphagene/Magneto/Arbhar and a ton of others tough choices needed to be made. I fell in love with the sound and the feature set of the Mimeophon so that’s the one that won out, but a Typhoon is very much at the top of a list for a rack #2, if that ever happens

Here’s my research playlist for the Mimeophon if anyone wants to get a sense of it:

It’s a great day. I’m happy for you, Lars. Really

It is! Thanks very much Marc, you’re very kind.

I’m slightly late to the party, but I just wanted to say congrats Lars! This is so exciting, and I am very happy for you! I enjoyed the “The First Lady Sings,” great first patch!

As you explore a bit more, I would be curious to hear if it was everything you hoped for after all your research, either as a whole or regarding single modules(that WMD VCO, AJH VCF, & Instruo LFO are definitely catching my eye). To me, it looks like a seriously well-rounded module combo, and this has to be a killer first set-up for you.

Are you going to start using a video camera to show the patches?

Anyway, have fun man, and I can’t wait to hear some more sounds soon!

Thanks very much Adi! Yeah, I’m pretty exited about it. I’m still at the stage where I’m touching the knobs with reverence

So far it seems like it’s what I’ve hoped for, but I’ve only just begun exploring it. I’m in love with the sound of the Mimeophon so far, and the FX AID seems like a killer effects unit. I had a good sound-tester with the WMD/SSF:Spectrum VCO today and it sounds pretty nice I must say, with some great features in it. Also had some play with the bloom sequencer and it seems to offer some nice generative things that I hoped for, combined with the ability to start off with two fixed sequences. And the Graphic VCO is a beast, can do an awful lot, there’s a lot to explore there. At first listen the AJH VCF sounds great as well, as the videos had led me to belive, but I need to give it some serious play before really being able to report on it. Yeah, I did put together the system to be a fairly complete system, with a LOT of good sounding functionality to make me happy for a long time. Time will tell but I think I’ve suceeded. It does feel like a killer first system right now, but ask me again about it in a few months, and my response will be more nuanced.

No, for the moment I’m not planning to get seriously into making high-quality videos. It’ll be still pictures of the patched up system and video of supplementary VCV Rack voices. Might come later but it’s not a priority. I’m not exactly a performer either, and have no hunger for seing myself on film

When you say Instruo LFO you’re probably talking about the Ceis, which is a pretty interesting ADSR with some killer additional features. I have already played a bit with it and I think I will really enjoy it. Especially the gate and trigger outputs I suspect will be great for interesting rhythm generation, but I think I’ll also be able to use it for gate/trigger delaying and stretching, and all manner of interesting things with the CV inputs. I’ll definately give some mini-reviews when I’ve really dug into them, one by one, if there’s interest.

Thanks for the kind words Adi, and as always looking forward to some good music from you too

By the way, if you look at my channel, there’s a lot of modular -* playlists, for each of the modules I have been researching, with the best videos I could find:

Ahhh yeah, of course, silly me. Yes, the Instruo/DivKid::Ochd is a very cool, compact little 8-way LFO, with a few tricks up it’s sleeve. It has definately been a homerun for Ben DivKid and it’s been sold out regularly. Whenever someone asks themselves the question: So, what LFO should I get for all those modulation needs, they should definately take a look at Ochd:

Slowly getting to know the modules in my new system, including their strengths, quirks and bugs. This is just a small snippet from the learning process, nothing terribly musical.

Spectrum VCO with sub-osc into the AJH VCF and the Mimeophon. Plaits into Fx-Aid reverb. Both sequenced by the Bloom on each their channel.

So far I quite like the sound of my modules, and that’s good because I spent a heck of a lot of time researching them

The Bloom takes some work to get to know and utilize. I see it’s potential but it also seems to have some bugs (I hate bugs). 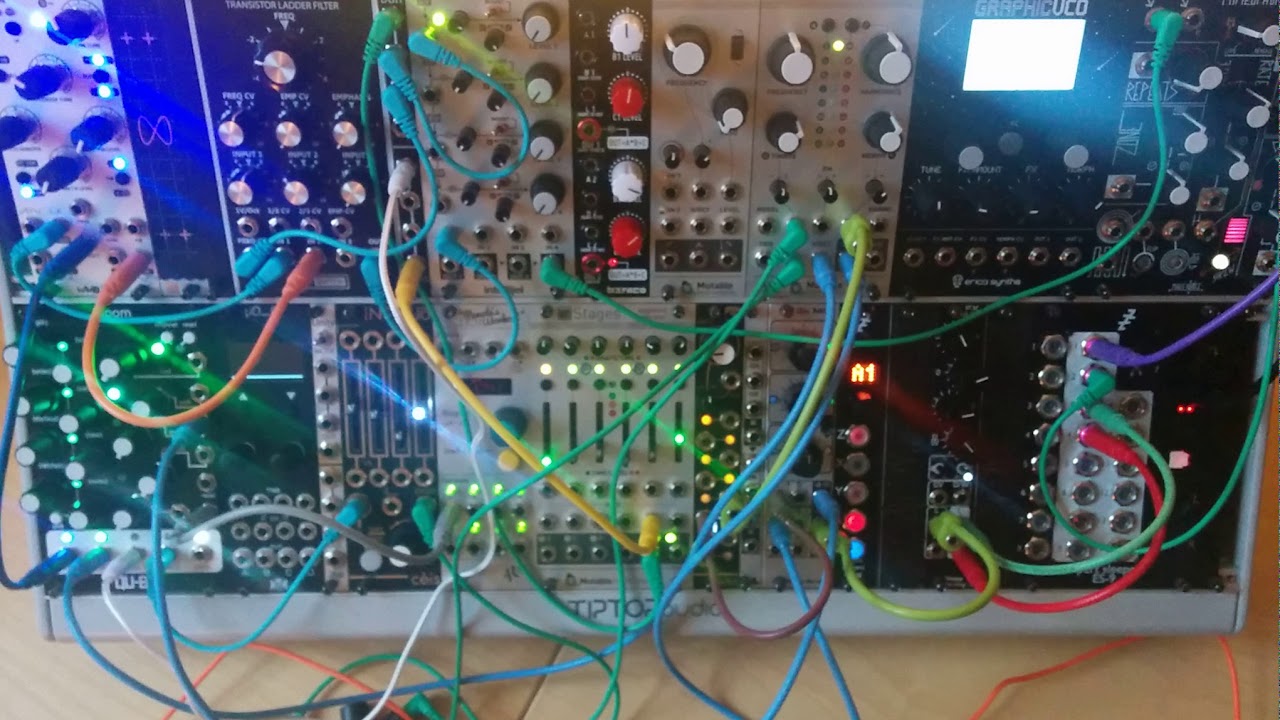 Thanks for the perspective on these modules you got Lars! Yeah the Mimeophon is ridiculously great and so simple to get a nice result fast. I need to look at this ochd a bit more, like I want to see all 8 lfos on a scope, twist the knob and get a feel for what its doing, but I just haven’t had the time to look for a video that does this. Anyway, I have not been around here too much lately, so I apologize for the late response. And, I’m pretty excited to hit play on your new video right now

Dude, the sounds are awesome. That bass has that classic analog feel to it. Plaits sounds like a viola or something. Its pretty cool you do all the sequencing with Bloom. What is quantizing it? I thought you were getting an intellijel quantizer at first, but maybe Bloom does this already? Anyway, I’m excited to see how your patches progress as you go, fun stuff!

Thanks very much Adi!

Yes, Bloom can quantize to a selection of the most common scales. I had the Intellijel quantizer in there, but Pyer and Paul convinced me to go with an Ornament & Crime, which can quantize to user-defined scales, and so much more.

Yeah, it’s an adventure and I’m exited to see where it’s gonna go as well

For now I feel like I’m just learning the ins and outs of the different modules, which is a great pleasure in itself. This is my research playlist for the Bloom:

Maybe I’ll produce that Ochd video you mention, I did think about that actually. In the meantime, here’s the man introducing it himself: 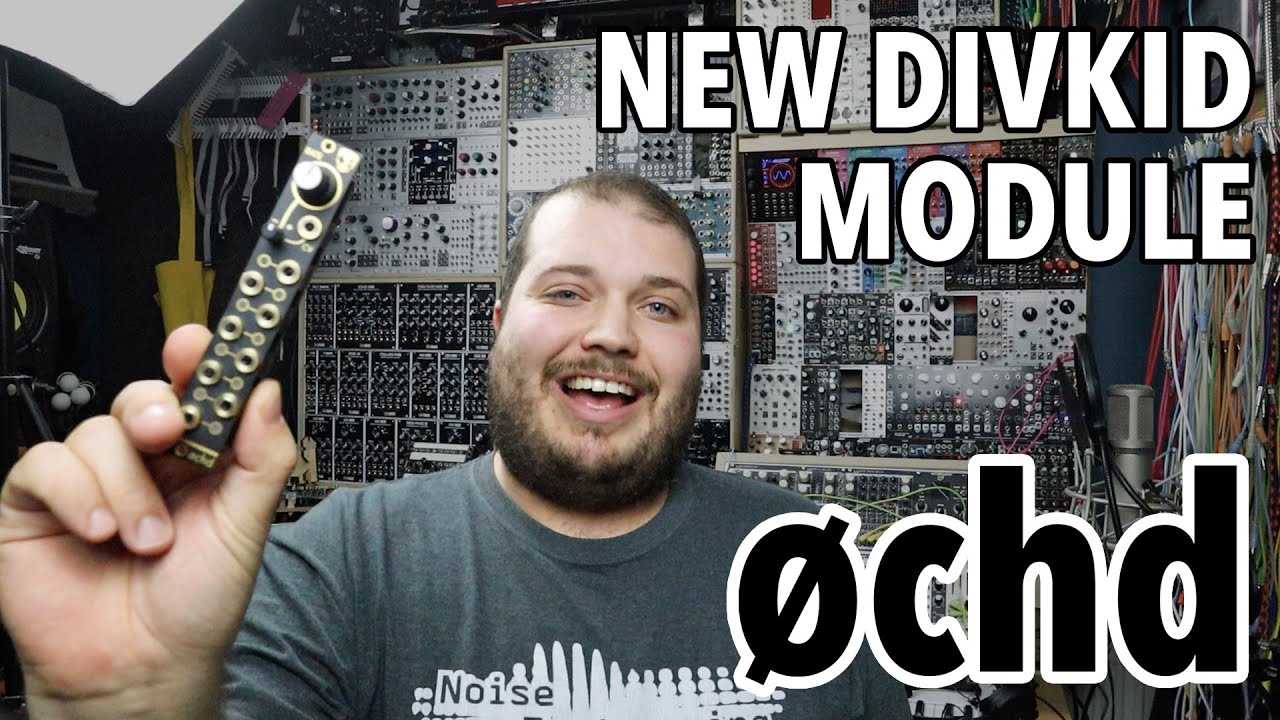 That bass line is especially nice. I know you’re going to make some great music with the rack

What Bloom bugs have you had - the mutation range?

Thanks very much Paul! Yeah, I quite like the sound of that Spectrum VCO, and then paired with the AJH filter which is a super high quality Minimoog filter. The Spectrum has so many nice features, seems like close to the ideal bread and butter VCO to me so far. I got the tip about that one from Chris Meyer/Learning Modular, when he was putting it in his monster case in the second Feeding The Monster episode on DivKid, I belive it was. Those are so good and packed with knowledge.

The Bloom bug I encountered was, that when multiplying the speed, and maybe externally clocking it is a factor as well, sometimes it stalls for a brief moment, simply stops emitting gates, and then starts again. You can actually hear it in the last few seconds of the video, as I’m fading out. I might have to try and make a simple test-case and file a bug-report with Qu-Bit and see how responsive they are. There was something else, when dialing in the gate-length, that seemed kind of buggy.

With the mutation knob, I actually found that if you dial in a very small amount of it, it’s quite useful. Just making the first LED half-lit or lit. Then it works pretty much like Marbles set to very slowly let new notes in to a frozen sequence. And the branches knob is fantastic. You can let it do it’s thing, and then hit shift-reset and you’re back to the base sequence. Good stuff, very useful for live play as well methinks.

Those videos are still on my watch list. Looking forward to spending some time with them.

The Bloom bug I encountered was, that when multiplying the speed, and maybe externally clocking it is a factor as well, sometimes it stalls for a brief moment, simply stops emitting gates, and then starts again.

Actually that one might also be my audio interface flaking out, so not sure that’s a Bloom bug yet…

This would amazing if you made a video about ochd. I feel like it would be pretty easy with the ES-9 and AH PolyScope in VCV. You almost don’t even need to see ochd itself, as long as you can see, and maybe even hear with some sounds, what is happening between the different lfos and turn/modulate the frequency knob and observe.

RJModules has a module inspired by Ochd, but I don’t know Ochd well enough to know how close it is to the original:

It sounds like it’s an exact clone of Ochd from it’s description. I haven’t tested it.

Various modules for VCV Rack. Contribute to Miserlou/RJModules development by creating an account on GitHub.