The CPU usage issue is fixed. Not sure when it will be available since I just pushed a bug fix release that has not hit library yet, but soon

Here is my “not so ambient” approach to Omri’s fixed Rack (the fun starts at around 1:30 min): 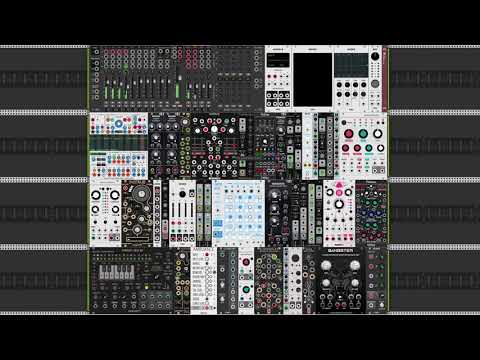 Was fun to play around with, thanks @Omri_Cohen !

How was your experience working with this patch?

The CPU usage issue is fixed. Not sure when it will be available since I just pushed a bug fix release that has not hit library yet, but soon

It is curious to see what options for solving the problems you propose. So far, everything works fine for me, but advice for the future, in case of a problem, will not be superfluous.

I don’t know what you mean here

Me neither, I think you might have mixed up something?

Anyways, I reworked the LFO-Stack with the BPM-LFO (V1). I will change a few things in the patch, but I am actively talking with a few devs about some feature requests I have. When and if there are improvements I am happy to release an updated version of the Patch and I will let you know.

I haven’t gotten any feature requests

It was a lot of fun. I would not use every module in there (I am normally happy with one delay and reverb and cannot get something useful out of Clouds). I was missing some euclidian / polyrhythm-module, but I used the 8-to-1-switch for that. Sampling is always a lot of fun, and the simpliciter is a wonderful tool.

So if I had to change something it would be Gate-Seq → Div-Seq / Clouds → Harmonaig / Sangster → Turing / Ambuance → Eugene. The amount and selection of ENV, VCO, VCA, VCF, LFO was nearly perfect (maybe Squinkys F2 instead of Valleys Feline, but that is down to individual taste and I am a complete Squinky Fanboy).

Thanks for your feedback!

Easy answer to that: I am happy with your modules

That interesting. In my mind (and on paper) certainly Feline seemed to me the closest filter to F2, both having two two pole filters mixed together. I never did a direct compare. My guess is that in some ways they are similar, and in some ways completely different?

They are very different soundwise. The only setting I could find, where they are nearly identical is when you turn everything to zero on both and then use an envelope to get a sweep. And even then the interpretation of the envelope is different (more even on the F2 I would say). The tonality when you turn up the resonance is very different, and your R-Control is musical, the SPC on Feline is not so defined. And there is no way you can get the snap of the F2 (with the Limiter in Alt-Off-Mode) in Feline. And that was just the sound, Polyphony, CPU-Consumption (16 voices through the F2 = Feline in Stereo). The only thing missing is the drive, but if I remember correctly you wanted to design an abolutely clean filter and there are a lot of other drive options in VCV. Feline is a nice sounding filter, but F2 is topping that for me.

Nice, good to hear! Yeah, it’s not so much that I wanted F2 to be clean all the time as that I didn’t want to use all the cpu to decent distortion. But I’m glad it. Ended up being a kind of unique sounding thing.

Just a quick tip here for dual mapping one controller to two sources, since multiple mappings on one control seems to be not possible in VCV.

I wanted to save presets on @stoermelder 's transit, but still be able to control the mapped controls via midi. Here we go: Knobs (as an example) is mapped to 23Volts Multimap and the Multimap-Button is mapped to Transit. 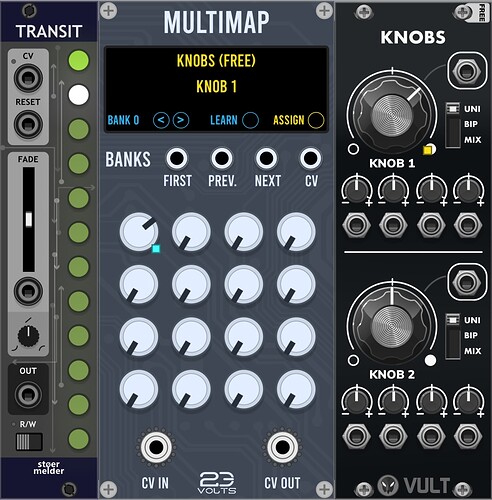 I think if Transit had a Midi-Cat-Expander, that could be useful (expecially since 23Volts github seems to be gone…). Oh, and the option to receive and switch presets via program change. And 128 presets of corse… I think I need to head over to Ben’s GitHub

A big thanks to @hemmer for porting befaco percall! I am finally able to post this tiny techno patch, which I am working on for a while now. 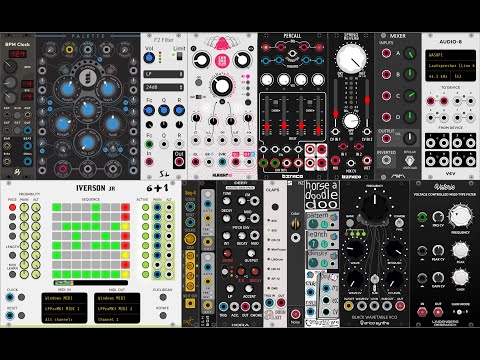 It is inspired by ‘mylarmelodies’ TINY live techno eurorack synth and I recommend watching his video first, to understand what’s going on. 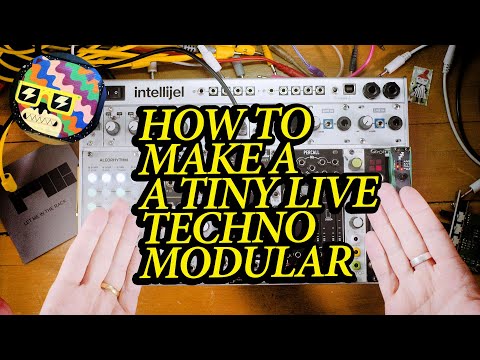 Here is the patch on patchstorage:

After watching mylarmelodies video, where he builds a live techno eurorack synth in just 62HP...

very cool. I like this video with lots of info in the titles and no talking. And the way the pads are hooked to that module, seems really slick. good stuff.

Thanks, I don’t want to confuse anyone with my flawless german accent

So subtitles are the only option

Maybe you could hire @Cabotage_KSM’s Robota to do the job.

My entry for @Omri_Cohen 's Day of the Dead Giveaway. 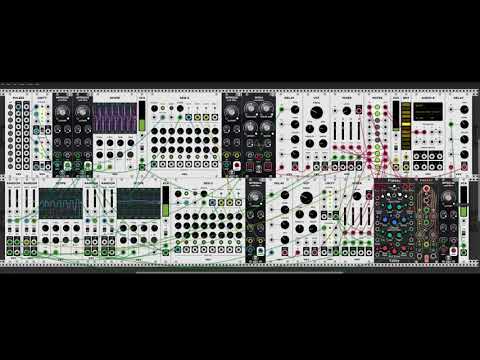 My ideas behind the patch:

I “accidentally” patched Nitrous in a feedback loop while doing some ping-testing with it and it happened to self-oscillate at clock speeds with a usable waveshape for clocking a sequencer (upper Scope). With Resonance at 100% and Cutoff quite low, the Drive Control becomes a Speed Control.

I wanted to get out as much as possible from those two nitroclocks, so the first pair of S&H (VCV Random - botton left) is sampling the waveform of one nitrous, while triggered by the other one. I use those modulation for different things all over the place, one output goes to a quantizer and then as V/Oct to the Geodesics Energy. The second pair of S&H is used for a slower and more slewed modulation, which is among other things modulating the speed of the nitroclocks.

I use a mixer for each stereo-side while patching everything in both mixers but modulating one input with a CV, while the other one is modulated with the same CV, but inverted, to get a panning effect.

The Delays are modulated in Speed to get those chirping-sounds and in Feedback on the Geodesics Energy.

I change the quantization from Cmin to Omris favorite scale to finally land on a Cmaj.

Here is the patch for you to play around if you like:

Day of the Dead - my entry for Omris GiveAway | Patchstorage

Infos on the forum: https://community.vcvrack.com/t/mos-sphere-of-random-patches-music/12765/41