Hi, I’m trying to do an arpeggio in C major key but I have problems with the transposition of the chords. 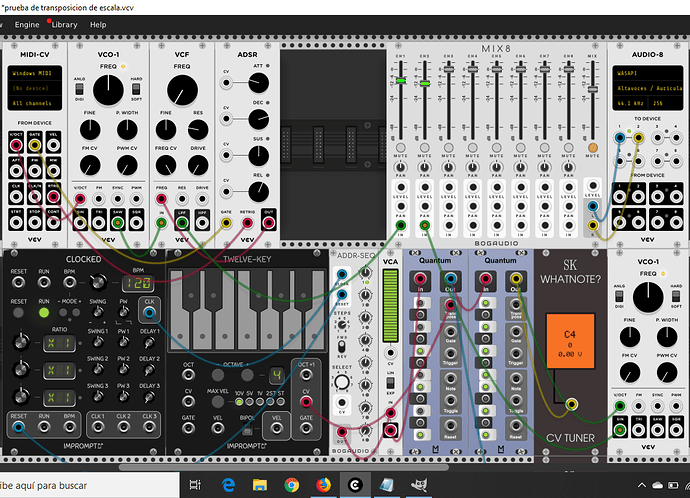 I use an ADDR-SEQ with the following steps:

… and two Quantum: First Quantum -> Up with active C, E, and G notes. Second Quantum -> Down with all active white notes.

And this is what gives me back

(the check mark, x mark and inversion are my assumptions)

I don’t have much knowledge of musical theory or modular synthesis, I’m just getting into this world. Your suggestions will be very helpful for me. Thanks!

Should be closest, up. This fixes the GMaj and Emin, and yes there are inversions. EDIT : but it messes up the Dmin, so yes it does NOT work. EDIT 2 : Do it the way @Schabbes did and it works great

(I should have known this, because I already did it like that…)

It is because you only transpose the root note in Quantum and not the whole chord. This is how Quantum works. You would need some quantums and sequential switches to do it as you want.

Quantum only transposes the scale, not the incoming pitch. To do what you want just connect the output of the first Quantum to a unity mixer like Bogaudio UMix and add the output of the TWELVE-KEY, then send the mixer output to the second Quantum.

The next section of ramblings of an idiot was totally wrong because I fd up the order and I have therefore removed it. @Schabbes You are absolutely right

or you could use repelzen re-win with its scenes