Hi, I’m trying to understand the Transpose feature of Quantum by comparing it to JW-Modules Quantizer. Maybe I’m comparing apples to oranges.
On Quantum I set a C major scale but I want it to play a A minor scale as set in Quantizer. So I injected an A into Transpose but none of the notes from Quantum made sense. The description of this on the wiki pages sort of makes no sense to me.

What does Transpose do (in littler words please 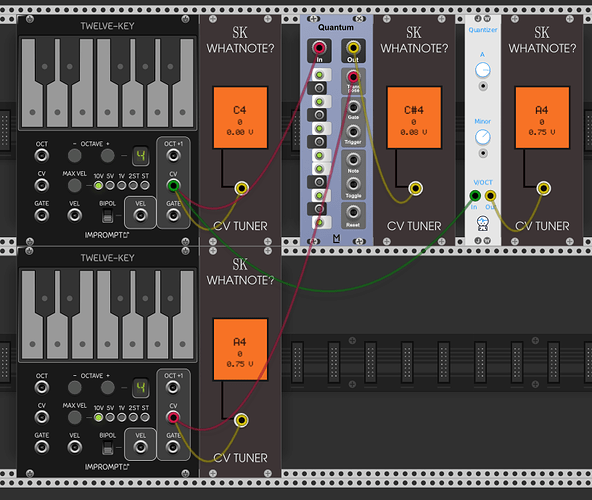 I guess a voltage of 1/12V transposes the selected notes by one semitone.

Hi Chris!
The transpose function on Quantum will transpose ONLY the SCALE and NOT the pitch. Also, if you set the notes of C Major like in the picture and transpose it to A, you will get an A Major scale, which C# is a part of the scale and not C natural. If you want A minor, you don’t have to transpose at all in this case because the notes of the C Major scale are also the notes of the A minor scale. I hope it makes sense… Cheers!

If you really want to transpose to A Minor just add -3*1/12V to the input voltage before going into Quantum.

AH!!! I slept on this and now I understand. And it was unfair of me to compare Quantum to Quantizer.

If I have an active scale of C, E, G but transpose say 1 semitone, the ACTIVE scale now becomes C#, F, G# (and all combos of scales and transpose values to boot) in the same octave.

Can’t we have a metric scale? 10 notes to the octave, 10 centicents to the note

Cheers, Chris! You can also try Scalar from VCV, it’s also an interesting one where you can have all sorts of weird scales…