Has anyone successfully tried automating the Mixmaster mutes? In other mixers, using Jooper (or any other switch), it was easy to just apply 10v to the mute port to turn mute on, and when it reverted to 0v, the mute turned off. Mixmaster says it follows the rising edge of the signal to turn on, and needs another rising edge to turn off. I’m trying to find a way to use a sequential switch to rotate among several voices.

You just need to think of it in terms of momentary triggers which toggle the state rather than gate high (10v) being on and 0v being off.

The buttons need to work this way so they can be controlled by either cv or midi. Console works the same way.

So, if anyone is interested, here is how I got an automated cross-fade to work with the Mixmaster. Every 64 clock ticks I wanted to fade one channel out and fade another one in. Getting a channel to fade in, or getting a channel to fade out is easy – just send the trigger as Steve has said. Getting them to cross-fade is more difficult. In my case, I have to get the channel I muted to fade back in before the sequential switch pops to the next channel. Here is my solution. 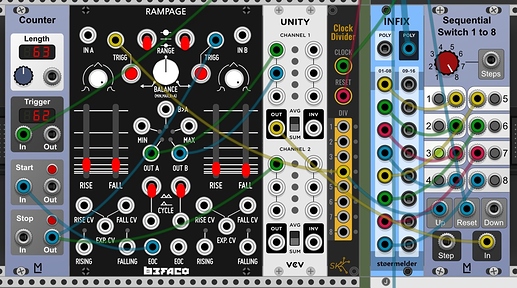 I feed a /64 clock to Rampage (and to the switch), which starts a counter that will end before the next /64 cycle begins (63 ticks worked for me). The top left of the Unity module merges the fade-out signal with the fade-in signal to feed the Sequential Switch and the Sequential Switch is feeding Infix to send the mute instruction to the Mixmaster.

I haven’t seem anyone use Jooper with the Mixmaster, but I am sure that some other new workarounds will develop involving the mute/fader. If anyone sees an easier way to do this, comments are welcome.

would be cool if you could save this as a Strip preset file and share it here.

or you can use just one module nysthi::autoxfader

The buttons need to work this way so they can be controlled by either cv or midi.

The buttons need to work the same way, butthe CV inputs don’t. So on the SquinkyLabs mixers the buttons do toggle like that (by default) but the CV inputs are plain gates (with anti-pop filters, of course).

oops sorry for the invasion: not being a real musician I mismatch needs…

No worries, @synthi. You have so many modules to explore, I am sure that I am missing some gemstones in your jewelry box.

Could this work ?, it fires a trigger when the gate is high and low, combine them an you get an on/off signal ? 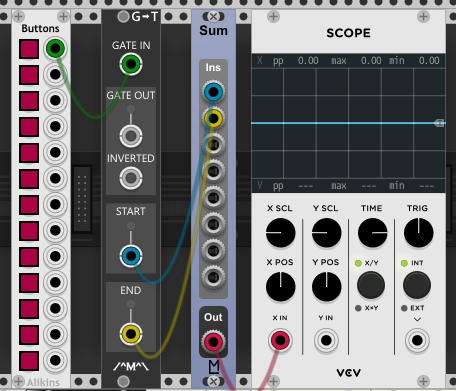 I was going to say the reason we did it this way was so the mute cv would also toggle the mute button state - I looked at your Mixer8 module and the button state doesn’t toggle when mute is CVd. But then I looked at Form and it does there.

Regarding anti-pop - it is on everything. Wouldn’t be surprised if half the CPU use was due to anti-pop haha.

I looked at your Mixer8 module and the button state doesn’t toggle when mute is CVd. But then I looked at Form and it does there

Yes, people complained about it so we fixed it in the newer modular mixers, although there is a context menu to put it back the old way. We don’t update Mixer-8, but instead recommend that people use the modular ones, which have way more features.

Maybe using Mutes instead of Buttons for some CV control. It’s worth exploring to see if it would work with Jooper. I have a solution that is working for the current patch I am about to post. Perhaps, I will try this suggestion afterwards. Thanks.

The buttons were just there to test if the gates work, It works great with gates.

Yes, I had confirmed early on the a gate would work. But, I thought that they would follow the rise and the fall of the gate signal. Needing two separate gates or triggers messed me up.

I know, that’s why I offered this solution and it does NOT work

EDIT : it DOES work but you also need a D-Gate to lengthen the trigger a little. 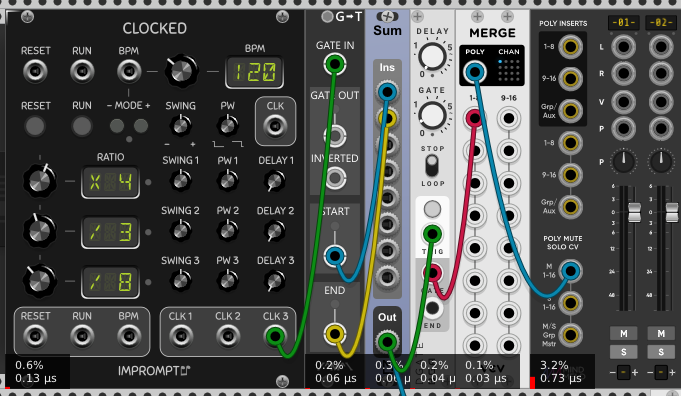 So, here’s the piece that drove this discussion.