Hi All. Recently I started using the quite fantastic Mixmaster from Mindmeld. (In combination with the the Auxspander and the EQmaster.) I noticed however that on using channel 9 as a stereo channel -feeding it a left and right signal- the sends (Auxspander) and the analyser of the eq don’t work, although the EQ works fine. When feeding channel 9 only one signal (left) both do work. Question is, is this intentional or a flaw? Anybody had the same experience? I wouldn’t bother writing about this, but it took me a while to figure it out. Or am I doing something wrong after all? Have a nice one.

Similar. But the EQ is on the the far right side: mixmaster, auxspander, EQ. Group/aux is not linked trough the EQ. No channels routed through groups though. Aux 1 and 2 used for different reverbs, but neither send works when using channel 9-… as stereo.

You panned the 9 channel all the way to the left ? this is a mono channel AFAIK, I think you were already solving your issue by using channel 9 and 10 and panning them ? This is not the setup that is not working ?

To be abslolutely clear. This is the setup I made after discovery of the “weird” send/EQ bahaviour. The pic below shows the “faulty” setup with channel 9 used as a stereo channel. The send is almost fully open, yet nog signal returns. The EQ shows no spectrum analysis although there is signal present (regretfully invisible on the screenshot) and the EQ as such works. As soon as the right input of channel 9 is disconnected everything starts working as -I think- it is supposed to.

mixmaster previous setup1838×359 233 KB
And a pic with the right input of channel 9 disconnected.

Can you post the patch ? (remove all that is not necessary, just the faulty behaviour if you don’t want to post the whole patch)

Saved the entire patch because I’m clueless as to the cause of the faulty behaviour. Strangely enough it’s not as easily reproduced as I initially thought. If you have questions about the patch, Test Ambient & Timing 1-0_TEST.vcv (203.7 KB) just let me know.

I think it’s phase cancellation, try delaying the right signal with 1 or 2 samples 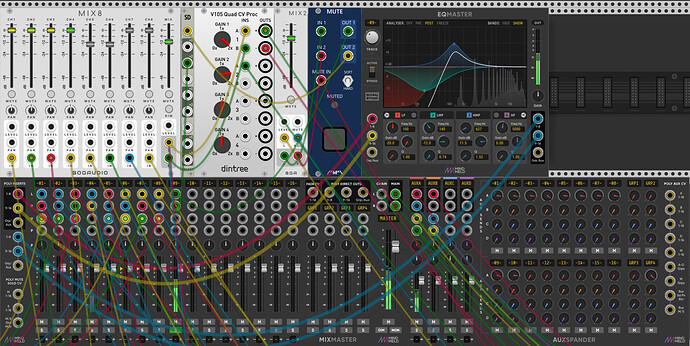 But issue is definitely phase cancellation.

If you unplug EQMaster, then the track itself is totally silent haha - which is why nothing is going to the sends and there is no scope in EQMaster… (when EQMaster is plugged back in)

When EQMaster is plugged in, the phase cancellation is being partially uncancelled by EQMaster I guess which is why you are hearing anything at all.

Ok. Phase cancellation indeed. Just checked and it was due to a patching error on my part. I sent the output of the bogaudio mixer to the voltage processor (left of the LFO left of the pitch shifter) and mistakingly processed the same signal (as there was no panning on the bogaudio mixer) positive and negative. After switching the right chanel to an also positive processing circuit the problem was gone. I do hope I didn’t inconvenience you too much with what was basically my error and I apologize if I did. Thanx heaps for the help though. Despite the fact that I found a work-around it’s better to tackle the problem at the source. And, yes, I really dig the mixmaster. Again thnx and enjoy.

Answer above was ment for yeager, but thnx also , Steve.

I’m glad we figured out what the “problem” was