Midi to VCV from more than one track in Bitwig?

Trying to keep the CPU usage down, is there a way to use only 1 instance of vcv say on track one, and also send midi from track two to the same instance of vcv?

While Jeroen is writing already, i’ll add an extra screenshot as i was gonna write as well 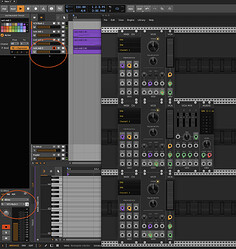 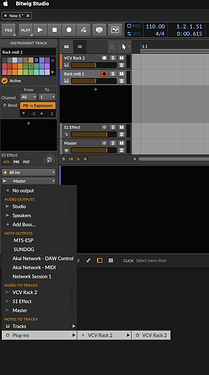 You can do that, but not sure if CPU is saved and you can also send another midi channel from the same instance of VCV. Just choose MIDI channel 2 in the Editor.

The ‘other’ way is if VCV is channel 1, add a new instrument channel nr 2 and press M to open the mixer. Go to the new instrument channel 2 in the mixer and set the ‘master out’ to CH01 plugin VCV, so it will send midi to the plugin on ch01. Still in mixer mode you can set VCV to receive from Channel 2 instead of All In. . And since Latif has the visuals he might clear things up better than I do.

i agree on that it might be more cpu efficient to use different instances of the VST for different tasks.

yeah, you could be right, but it’s beyond me to say something about it, haha. EDIT

ohhhhhhh ok… so just using a vst on every track might be better for CPU because of opening a very busy window running every track?

Thanks for the tips, got the midi routed correctly. I think your right… I made a new video of that patch that I then broke down into 4 separate vcv racks and it was lighter on the CPU for sure.

ps. it is something to do with letting the host (daw) assign the cpu -cores/threads per vst instance.
(not sure if i am explaining this correctly though, i remember reading something about this a while ago here at the forum).