On this Chromebook arm64 I dropped View > fps to about 20, and run 2 threads so I can also not interrupt the YouTube. It does 48 kHz, and although only a few modules, doesn’t really under run if I don;t move or zoom windows. Are you sure the Rosetta layer isn’t JIT compiling the future just when you’d like to have the code all runny? Mac arm64 is beta, perhaps it will get better.

Here’s what I’ve managed lin-arm64 so far VCV - Google Drive and there is likely more. The tool chain on Mac although different should be able to out perform this 8 core with 2 GB on the virtual linux container.

No glitches 2 threads. Picture in picture and all sound plus occasional drone beat to test. 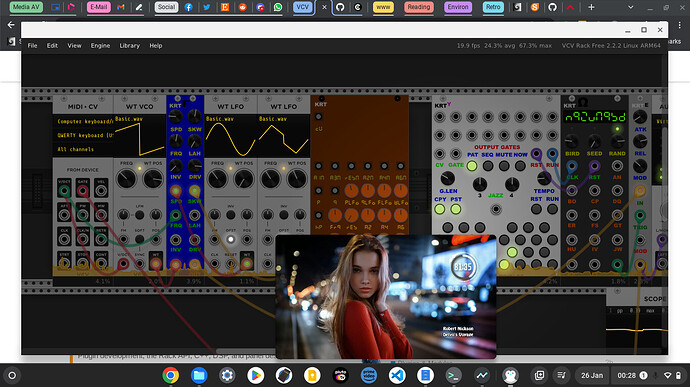 Here is top aliased to htop

And what the main google tool thinks

Although if I play audio books and the screen goes off I can get over a day.

That’s excellent performance. Makes me hopeful for playing with VCV on a Pi4 (or its successors).

As for Rosetta, AFAIK it does a complete trans-compile of the entire code on first load. I’m not sure how they handle plugins—though the performance drop has more to do with a lack of threading than any intermittent performance drop.

@LarsBjerregaard has had excellent results running under rosetta on an M1.

I think we all do. I’ve read many people now on this forum that couldn’t be happier with the Apple Silicon machines and Rack. So I think there’s something else going on here. @dlphillips did some informal comparisons on his M1 machine suggesting, that for the Rack case and its plugins there’s only a roughly 5% performance difference between Rosetta and native.

Interesting, first time I’ve heard of that. So only an issue on PRO and MAX CPU’s and only when using multithreading?

No, my base level M1 MacBook Air also runs great under Rosetta as long as I stick to 1 thread. But it cannot handle VCV configured for multiple threads. In general I haven’t needed more than one thread. But If I want to run at very high sample rates to reduce audible aliasing introduced by FM or wave folding etc, then sometimes I wish I could use multiple threads. That is why I am looking forward to a native ARM release, hoping that it can handle multiple threads and thus allow me to run moderately complex patches at higher sample rates.

Yes it appears to work fine on lin-arm64 but with compiling your own modules as the library issue takes a build target to allow for architecture specifics. I mean M1 should be easy as arm7 vs. arm8 is quite sorted. The lin guys can usually CLI a compile anyway, and GUI simplicity is not often a complete deal breaker for them.

I haven’t run the mac arm beta. How’s it go with the library not using make run but ./Rack?